Government and institutions are ignoring minister’s blanket extension of permits 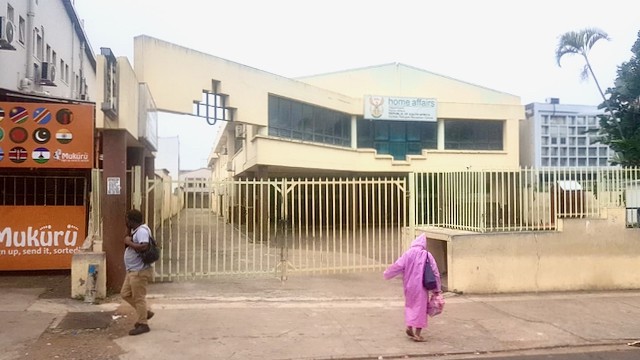 The Durban Refugee Reception Centre has been closed since March. Photo: Nokulunga Majola

The Coalition of the Poor has called on the Minister of Home Affairs to take urgent steps at Refugee Reception Centres nationwide and place additional resources at their disposal so that visas can be renewed without further delay. This comes after two immigrants allege police assaulted them in Durban on 16 October.

According to the Coalition statement “there are tens of thousands of asylum seekers whose visas have expired during the lockdown. The assurance by the Department of Home Affairs that expired permits are still valid clearly carries no weight if this de facto extension is not even recognised by SAPS.”

The organisation is calling on the Minister of Police to issue an assurance that SAPS is instructed not to victimise immigrants.

The Department of Home Affairs (DHA) Durban Refugee Reception Centre has been closed since the March Covid-19 lockdown.

“While DHA services have re-opened for South African nationals, the department’s failure to open services to foreign nationals is a clear example of discrimination … placing an unbearable burden on refugees and asylum seekers, many of whom have suffered through months of lockdown-related unemployment with no recourse to social relief,” said the Coalition.

“My refugee status and my passport are expired. The problem is that if you are carrying an expired visa, Durban Metro police and the South African Police Service are arresting people right and left. We are faced with too much police brutality. They keep innocent refugees and asylum seekers in custody. As we speak, we have a high number of refugees and asylum seekers in custody due to expired documents,” said Dunia.

He said although the Minister of Home Affairs had declared that permit visas are extended until 31 January 2021, this was not being respected.

Dunia said money is being frozen in their accounts by the banks; people with expired documents cannot access social grants; and they cannot travel.

Yasmin Rajah, director of Refugee Social Services at the Diakonia Centre in Durban said children’s admission to schools was being made difficult because of expired documents.

She said even when the refugee centre was open, newly arrived asylum seekers had battled to get appointments because of lack of capacity, there were long queues and problems with systems, and most asylum seekers were being rejected.