“We have been suffering for long and it’s taking forever” 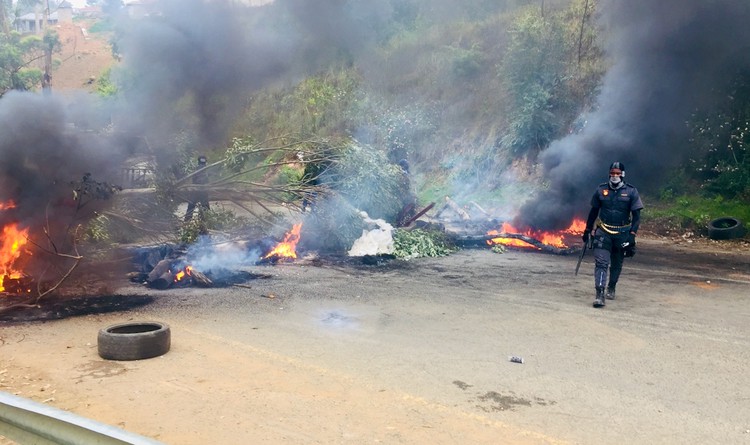 About 50 residents from Mbizane and Henley protested on Monday by blocking roads with burning tree branches and debris. Photo: Nompendulo Ngubane

“We decided that we come here and close the road that is busy so that the world can see our frustrations,” said Themba Mhlongo, a resident of Henley Dam, Pietermaritzburg.

Their main demands are to have the D2344 road fixed, a community hall for the area, and a regular water supply.

Mhlongo said their demands have been ignored by successive ward councillors.

Protesters threw bottles at the police. The police used rubber bullets and tear gas to disperse the protesters.

“We are tired of holding community meetings outside or under the trees because we don’t have a community hall,” said Mhlongo. “We have been suffering for long and it’s taking forever … Mbizane is an old area but there is no community hall.”

A resident who gave the name Ntombela and has lived in Mbizane for over ten years, said, “We feel that the issue of the road has taken more than it should. Taxis leave us not even half the way to our homes. There is a part of the road that has been eroded.”

A ward committee member, who only gave the name Gatsheni, said, “We are able to survive using old springs to have water. It’s been four years and more … Water tankers don’t come every day … We don’t know their schedule.”

Councillor Nathi Mbanjwa for ward 5 in the Vulindlela area, Msunduzi municipality, said that the 4km D2344 road would be attended to as after the municipality finished another 2km road project in the ward.

“We can’t leave that project incomplete and commit to another without finishing the one we are busy with,” he said.

He said water was a problem for the entire area. He blamed population growth. Mbanjwa said the municipality rotated its water tankers, delivering to various settlements.

He said funding for a community hall had been received from the Department of Co-operative Governance and Traditional Affairs.

Msunduzi municipality spokesperson Thobeka Mafumbatha said, “The building of a community hall will start after the design phase has been completed.”

Sergeant Sifiso Gwala from Plessislaer police station said a case of public violence was opened; no one was arrested.

Next:  Without the right to public transport, most people can’t access their other rights

Previous:  Abahlali leads hundreds in march against corruption in Durban