This is not a broken bus. This is a classroom in an Eastern Cape school. 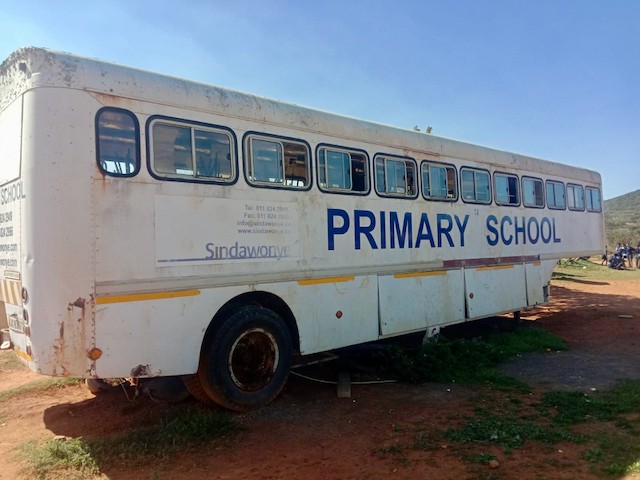 This bus has been converted into a classroom at Sindawonye Primary School. Photos: Thamsanqa Mbovane

What looks like a dilapidated bus standing in the school yard of Sindawonye Primary School, next to the R75 in Coega, Eastern Cape, is in fact used as a classroom.

The school has 79 learners from grade R to 6, too many grades and learners to teach properly in its two small classrooms, which are made of what appears to be Vibacrete walls.

The school has no electricity, no flushing toilets, and depends on a borehole for water.

“I often use the bus for grade 6 learners so that they can be in a quiet classroom and get more attention,” says Sindawonye principal Thobile Nqabeni.

However, monkeys are on the prowl in the area, and often sneak in and snatch unwary learners’ lunches.

“This is an underperforming school and the Department of Education has accepted that, attributing it to the dire situation. But they are doing nothing about it,” says Nqabeni.

“Of our 79 learners, there are seven who don’t have birth certificates, and neither do their parents … Even though they are not being accommodated for meals [by the school feeding scheme], we feed them. We are now busy assisting them to get these important documents.”

Nomakhuselo Mde, the only other teacher at the school, said, “I have 14 grade R learners, 11 grade 1 learners, 13 grade 2, and 3 grade 3 learners under one roof. Sometimes when I ask a question to a grade 3 learner, a grade 4 learner would answer.”

“But we won’t give up, because we want the best out of these farm learners. We don’t want them to be deprived of education because of growing up on farms,” she said.

Subsequent to our questions being sent, Department of Education spokesperson Malibongwe Mtima said a meeting is being held at the school to discuss a way forward.

Petros Majola, from child rights and gender-based violence group Khula Community Development Project, said the situation in this school shows that the department of education is still far from meeting its goals and standards in terms of public schools infrastructure.

“The department is aware of that school and does render services such as scholar transport … We are not responsible for building a school on that land as it is not ours, we can’t even fix a fence as part of the agreement with the owner.” 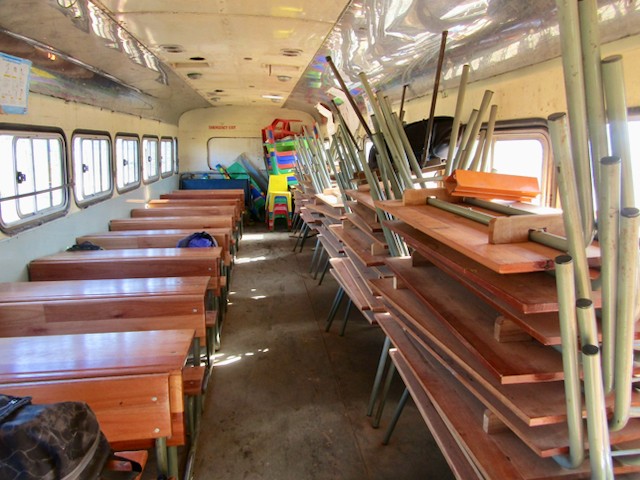 Inside the bus classroom.

Comment that came out of a meeting about the school has been added, including comment from the education department

Next:  Medicine stockouts: contraceptives are the worst hit