Supply lines unable to cope with surges caused by loadshedding 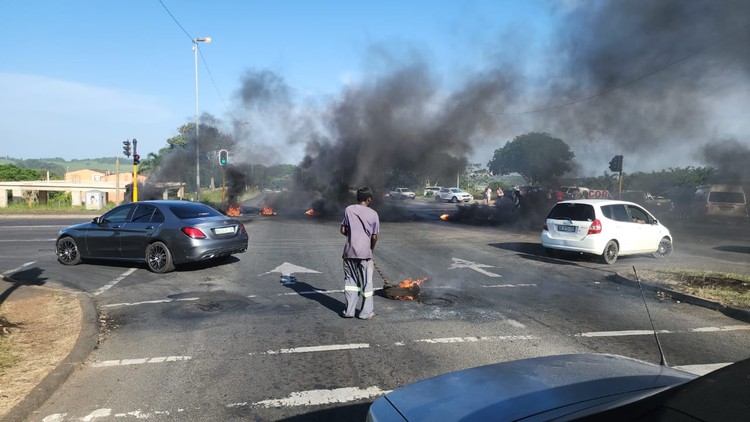 Protests started up again in Phoenix on Wednesday after dying down earlier this week. Photo supplied by a community WhatsApp group.

Fresh protests erupted in Phoenix, north of Durban, on Wednesday afternoon, with people taking to the streets and burning tyres. This comes after protests earlier this week were sparked by a 40-hour long power outage over the weekend.

On Tuesday, ward 50 was again without power. A business owner in Grove End said that power went off at 7pm on Tuesday and was only restored on Thursday at around 7am.

Councillor Jonathan Annipen (IFP), who is based in Phoenix, said that protesters gathered at the intersection of Phoenix Highway and Grove End, and barricaded the road with burning tyres, forcing motorists to turn back.

Ward 50 Councillor Lyndal Singh (DA) released a statement on Thursday morning calling on residents to be patient. She said power had been restored in some parts of Grove End and Stanmore, but in order to stabilise supply, power would be restored in stages.

Head of electricity at eThekwini municipality Maxwell Mthembu did not return our calls or clarify why there had been further outages in Phoenix.

On Monday, ward 49 Councillor Tino Pillay (DA) told GroundUp that in order to minimise the risk of line faults, residents should turn off high wattage appliances, such as geysers, prior to loadshedding ending, and then only switch these back on in stages once power returned.

North Coast community policing forum cluster chairperson Umesh Singh said he could not be sure what had triggered the new protests. Metro police and SAPS did not immediately respond to our questions about the protests.

According to a community leader in touch with municipal officials, eThekwini Mayor Mxolisi Kaunda will visit the area tomorrow. Mayoral spokesperson Msawakhe Mayisela, however, did not respond to our calls or emails for confirmation.