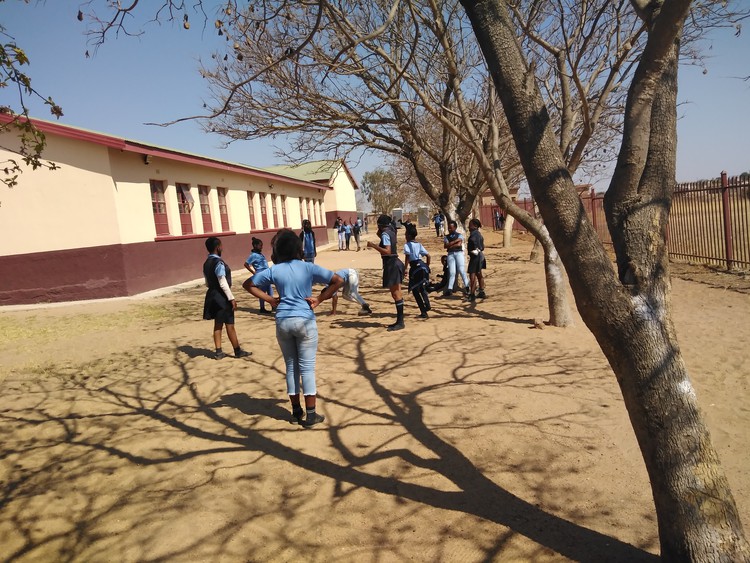 A survey done by Equal Education last month revealed that many learners go hungry on days they can’t afford to travel to school. Some learners in Limpopo qualified for meals but were not getting them daily. Archive photo: Bernard Chiguvare

Tracy* is preparing for her final grade 11 exams at Mmatshipi Secondary School in Mashashane, Limpopo. On days that her grade is scheduled to have classes, she walks about ten kilometres from her village to Mmatshipi.

Tracy asked that we withhold her real name because she fears being victimised by her peers. She told GroundUp that because both her parents are unemployed and battle to put food on the table, often the only meal she gets for the day is at school.

“I come from a poor family. Other learners can afford to drive back to fetch meals when we are not at school that week. I can not travel that distance only to fetch food only as it is tiring,” she said.

Tracy was one of 192 learners in Limpopo, KwaZulu-Natal, Eastern Cape, Gauteng and Western Cape who participated in a survey by Equal Education in October. The snap survey aimed to find out whether qualifying learners were receiving meals daily. Of those surveyed, 143 learners said they attended school in rotation. Most of these learners said they did not get a meal on days when they are not at school.

Tracy was one of the 62 qualifying learners in Limpopo who were not getting meals daily because they could not afford travel costs. All 62 learners told Equal Education that they went hungry on days they were not at school.

According to a report from the Department of Basic Education in October, about 1.8 million learners were falling through the cracks and still not receiving meals. About 19,000 schools benefit from the National School Nutrition Programme (NSNP).

In August, the North Gauteng High Court ordered Minister of Basic Education Angie Motshekga to roll out the school feeding scheme for about nine million learners immediately, whether or not they were attending school. The case was brought by Equal Education and the school governing bodies of two schools.

Now activists are urging the government to assist learners who are unable to get their meals because they can’t afford to travel to school for this purpose alone. EE, Equal Education Law Centre and SECTION 27 have recommended that the department arrange food parcels or vouchers for learners. They also want learners to be reminded that meals can also be collected at schools closest to where they live.

Tidimalo Chuene from the Limpopo Department of Education said learner transport only caters for those who are not within walking distance from schools. “In cases where a learner was taken to a school of choice, then the responsibility is still with parents/caregivers to get them to school, as was the case even before the use of differentiated timetables,” she said.

Chuene said that as of 9 September 2020, 44,000 learners were benefiting from the scholar transport programme in the province. She did not provide further comment on the findings of Equal Education’s survey.

Next:  Almost R254 million and 10 years later, still no water in villages