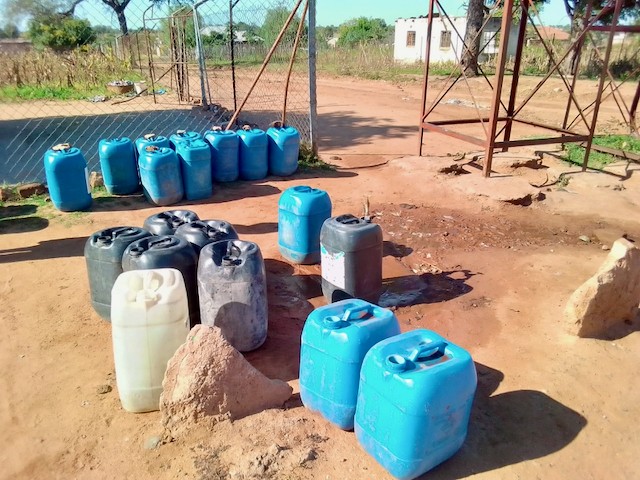 Villagers in Ga-Abele line up their 20-litre bottles at a street communal tap. They say the tap has no water for as long as three weeks sometimes. Photos: Ezekiel Kekana

The effects of tender irregularities and alleged corruption in the 2014 Giyani water project continue to be felt by people in Mopani district, Limpopo. Hundreds of thousands of residents have been waiting for years for access to water.

The controversial Giyani bulk water project, which was supposed to be completed in 2017, has been plagued by controversy and failure despite an estimated R4-billion in public funds spent on it.

Allegations of corruption and tender irregularities emerged when then Minister of Water and Sanitation Nomvula Mokonyane was accused of trying to influence Lepelle Northern Water board executives to appoint LTE Consulting for the project.

The Special Investigating Unit (SIU) instituted a liability claim against three Lepelle Northern Water board executives – Phineas Legodi, Carel Schmalh and Johann Christian Kilian – for a R1.9-billion loss suffered by the Department of Water and Sanitation as a result of the tender irregularities involved in the Giyani project. Last year, the trio approached the Special Tribunal challenging the liability claims.

In May this year, Minister of Water and Sanitation Senzo Mchunu promised that the Giyani project will be completed in September.

“We are here to assure you that by September this year, there will be water available in your villages,” Mchunu told the community before admitting, “I must say that the Giyani Water Project has been an embarrassment to both the Department of Water and Sanitation and to government as a whole, but we are determined to make sure this project brings water here in Giyani and the reticulation should also be to your households.”

In the 2011 Census, less than 1% of households in Ga-Abele village had access to water in their yards. We found villagers are still lining up 20-litre containers at the communal standpipe in 2022. They said sometimes the tap runs dry for three weeks. They said most people have to buy water from people with boreholes at R5 for 20-litres.

Residents of Mahenkgwe and Mpepule are connected to the municipality’s water reticulation system but say many taps have been dry for over two years.

In the Greater Giyani villages, over 55 villages with a population of more than 240,000 people still do not have water at standpipes on their streets or the taps in their homes. Those who do, about 12,000 households, have unreliable communal street taps and often have to buy water. 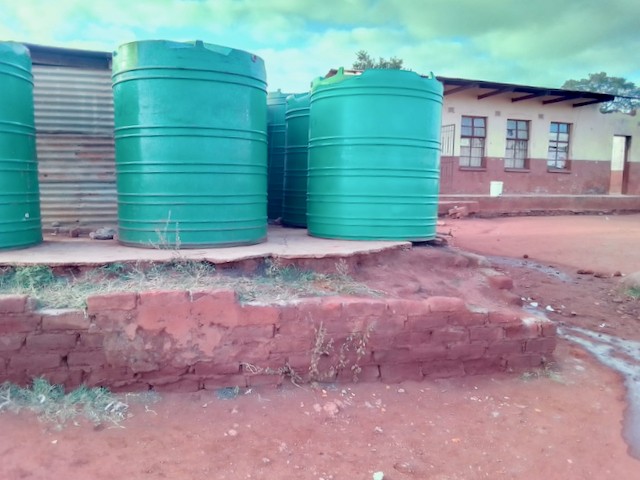 The tanks at Ga-Ratseke Primary School. The principal say they regularly spends R900 to fill one tank with water. It lasts a week.

The lack of access to water impacts badly on schools in the district that rely on the district municipality. Water is needed for learners to drink, for sanitation and for the preparation of food for school feeding schemes.

Godfrey Motshekgwa, Ratšeke Primary School principal, says they pay R900 to buy water to fill one tank. Each classroom keeps a bucket of water for learners. The water lasts a week.

The municipality blames the district’s limited water sources for the inconsistent supply and says the Giyani water project came into being to solve this by tapping the Nandoni Dam.

Many villagers expressed scepticism that the project would see them ever getting water in their yards.

The municipality still relies on the 2011 Census for data and said it has no updated figures. Back then, already over 60% of households (about 166,000) in the district did not have water in their yards. A huge number of villages in Greater Letaba, Greater Tzaneen and Maruleng local municipalities still only get water from communal taps.

“Council will soon be adopting the water service development plan and that should assist the District to move forward with speed in providing consistent water to communities across the district,” said Odas Ngobeni, the district municipal spokesperson.

Asked what this plan entails, Ngobeni said it cannot be shared until it is adopted by council.

Ngobeni said the municipality has provisioned R540-million for the 2022/23 financial year towards water and sanitation projects.

Oxfam South Africa says the lack of access to water for many villages in Limpopo province is “a serious human rights violation in disadvantaged communities”.

The organisation recently launched a solar water borehole project in Ha-Mashia village, which will benefit 7,000 households.

Ezekiel Kekana is an Open Society Foundation Fellow at the University of the Witwatersrand.

Next:  Court action to stop immigrants being denied life-saving healthcare