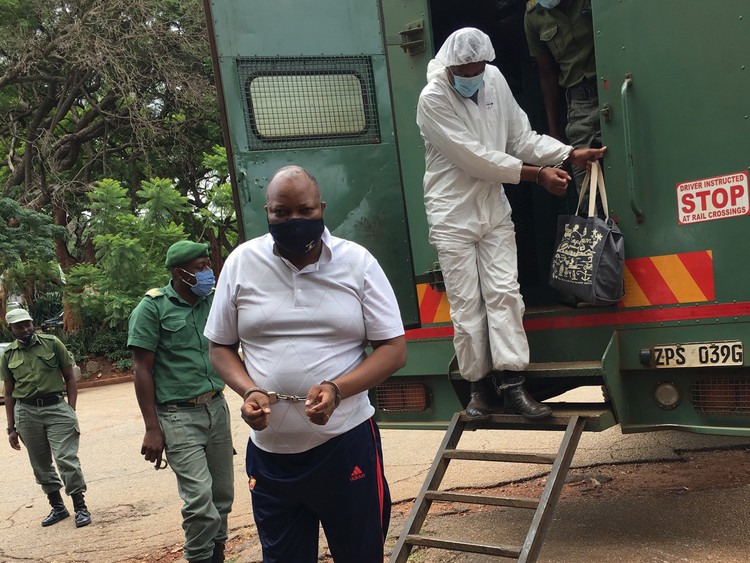 Zimbabwean journalist Hopewell Chin’ono and member of parliament Job Sikhala arriving at the Harare Magistrates Court on Tuesday. Chin’ono returned to court on Wednesday where his lawyer is currently arguing for bail. Photo: Twitter/ZLHRLawyers

The Harare Magistrates Court has dismissed a bid by journalist Hopewell Chin’ono to have a charge against him of “spreading falsehoods” declared invalid.

The award-winning journalist was arrested on Friday and remains in custody.

Chin’ono was arrested for the third time in six months, along with Job Sikhala, a member of parliament for the opposition party in Zimbabwe, Movement for Democratic Change Alliance (MDC). The spokesperson of the MDC, advocate Fadzayi Mahere, was also arrested on the same charge. Sikhala’s attempt to challenge the constitutionality of his arrest was denied on Tuesday afternoon.

Mahere is due in court on Friday to challenge her arrest. All three are being held at the Chikurubi Maximum Security Prison in Harare.

On Wednesday, Zimbabwe Lawyers for Human Rights, representing Chin’ono, said that they were currently applying for bail.

“On Tuesday when hard lockdown started in Zimbabwe, there was an incident of a woman whose baby was assaulted by the police. There was a video of this incident that went viral on social media. In the video, the woman claimed that the baby had been beaten to death,” said Paidamoyo Saurombe, of the Zimbabwe Lawyers for Human Rights.

Saurombe said that Chin’ono, Sikhala and Mahere had highlighted the incident on their social media pages as police brutality.

The police claimed that the baby was still alive and arrested Chin’ono, Sikhala and Mahere on grounds that “they had published falsehoods regarding the death of the baby at the hands of a policeman,” said Saurombe.

Chin’ono, Sikhala and Mahere were charged under Section 31 of the Criminal Law (Codification and Reform) Act. Saurombe said this law was declared unconstitutional by the Constitutional Court in 2014.

Chin’ono had returned to Zimbabwe the day before his arrest from South Africa where he had been receiving medical treatment in South Africa. He was instructed by his doctor to isolate because he had come into contact with two people who tested positive for Covid-19, said Saurombe.

“The prison conditions are not favourable. There is no running water in [Chin’ono’s] cell. He was being denied warm blankets and hot water. He only received them on Monday, after we made a request,” Saurombe said.

He said it was unclear how long the application for bail would take because in previous cases, Sikhala and Chin’ono had to remain in prison for nearly two months.

Next:  Blind pensioner left in the rain without answers outside SASSA office

Previous:  Adopt a Pet shelter in Philippi to close after 17 years