The provincial department of transport has allocated R1.5 million for repairs but admits it is not enough to rehabilitate the R58 road 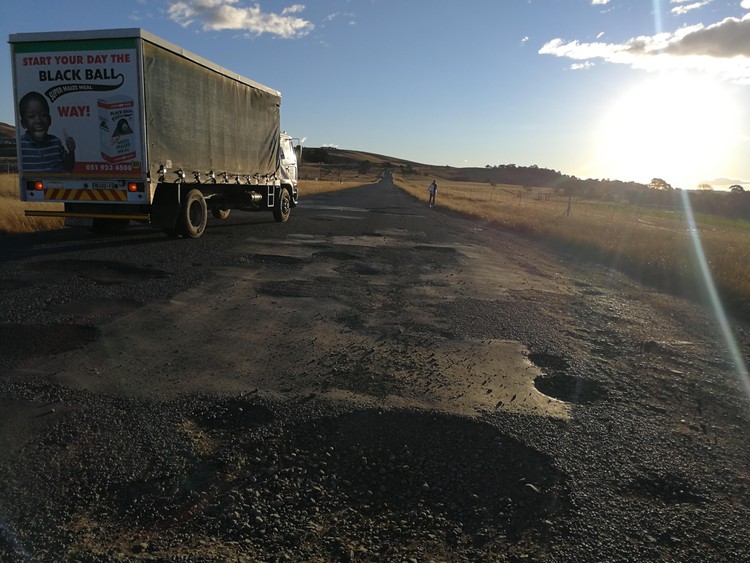 Long distance truck driver Moeketsi Tladi says he struggles to navigate his way on the R58 road in the Eastern Cape because of its poor condition. The provincial transport department says it will soon be doing emergency maintenance on the road. Photo: Johnnie Isaac

A month ago the Eastern Cape Department of Transport announced that it has allocated R1.5 million for the emergency maintenance on the R58 road for the 40 kilometres between Ngcobo and the split to Cala and Elliot. The road has been labelled by locals as a “death trap” because it is riddled with potholes.

Residents complain that the poor condition of the road has made transporting essential goods between the Free State and several towns near Ngcobo challenging.

Taxi driver Andile Sombo said more money was needed to ensure that the road is refurbished properly. “In some parts of the road you can’t just patch, it needs reconstruction and to be properly tarred,” said Sombo.

Another regular motorist, Mongameli Cholelo was skeptical about the government’s plan. “The contractor will not finish fixing half of the potholes with just R1.5 million … In the end, it will just be a waste of money,” Cholelo said the road has on many occasions damaged his tyres.

Long distance truck driver Moeketsi Tladi said, “Potholes are not the only concern, some people drive so badly and can force you to have an accident. There is also a problem with stock animals, especially cattle and horses.”

When asked why no maintenance work had started yet, provincial transport department spokesperson Unathi Binqose blamed bad weather, such as the recent heavy snowfalls and rain, for the delay. He said the department had applied for a stimulus package to rehabilitate the R58 and the road between Mthatha and Coffee Bay which has similar problems.

“We are doing emergency maintenance. Plans to rehabilitate the road need way more money and an application has been made. We are awaiting a response for this road and the Coffee Bay road,” said Binqose.

Binqose said that MEC Weziwe Tikana-Gxotiwe acknowledged the importance of the road and the problems caused by its condition to the surrounding communities.

Previous:  An interview with Hopewell Chin’ono