Churchgoers want their money back 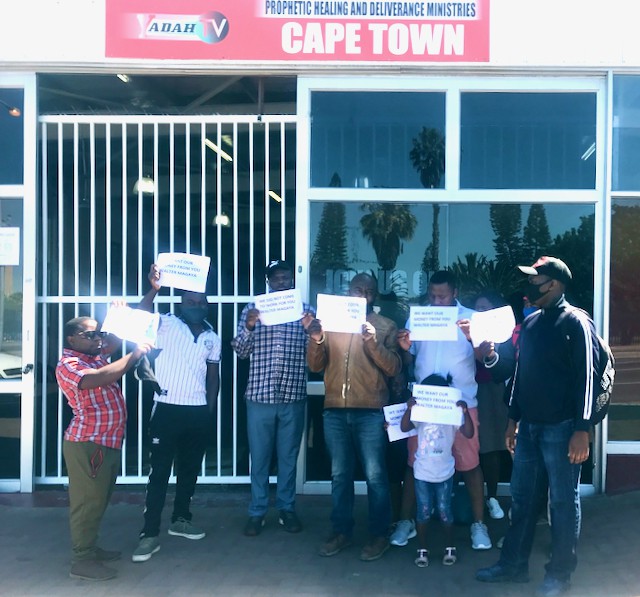 Former congregants protest outside the Prophetic Healing and Deliverance (PHD) Ministries in Bellville on Sunday demanding back money they invested through the church. Photo: Tariro Washinyira

A scuffle broke out at the Prophetic Healing and Deliverance (PHD) Ministries in Bellville on Sunday when current church members tried to block former members from entering the church. The former members accuse the church of scamming them out of money they invested in housing and other projects.

Police came to the scene and advised the protesters to approach a land claims court.

The members signed a memorandum of understanding (MOU) in 2016 with a subsidiary of the church’s investment arm, giving them rights to a residential stand in Zimbabwe. But the company has neither delivered the stand nor reimbursed their money as promised.

The same group protested on 17 July and threatened to cause havoc.

The church was founded in 2012 by Magaya and also has branches in Zimbabwe, Zambia and Australia.

A man who gave his name as Austin Madzivire begged the protesters to write down their names, mobile numbers and to return on Tuesday to meet with the finance office.

“The church has already started paying but there is a challenge that some of the numbers in our records are outdated. A few people have already been paid their money. Come back during the week. We let police leave the scene because we know you are within your rights,” he said.

After writing their names down, the protesters warned that if they return Tuesday and do not get their money, they will disrupt the church every Sunday until they are paid.

Stanley Mudzingwa said he quarrels every day with his wife about the R40,000 he invested with the PHD. “I have tried to engage the church since 2018 … They keep on giving me false promises,” he said.

A woman demonstrating told GroundUp she had invested R34,000 for a housing project. “All I want is my money. I am struggling with four children. Since lockdown I am not working. When I went to Zimbabwe to claim they said go back to Cape Town where you paid your money.”

One of the demonstrators said: “I wish the new faces fighting with us would open their eyes and learn from our situation. This church used to have an overflow. We would come here and stand the whole services because all seats were taken but look now …. the church is left with a handful of new faces. Where are all those people who used to fill the church?”

Next:  People pay R50 bribe to post office staff to get their R350 Covid-19 grant

Previous:  Hundreds march for water, electricity and toilets in Khayelitsha