Paramedics in bid to stop attacks on ambulances 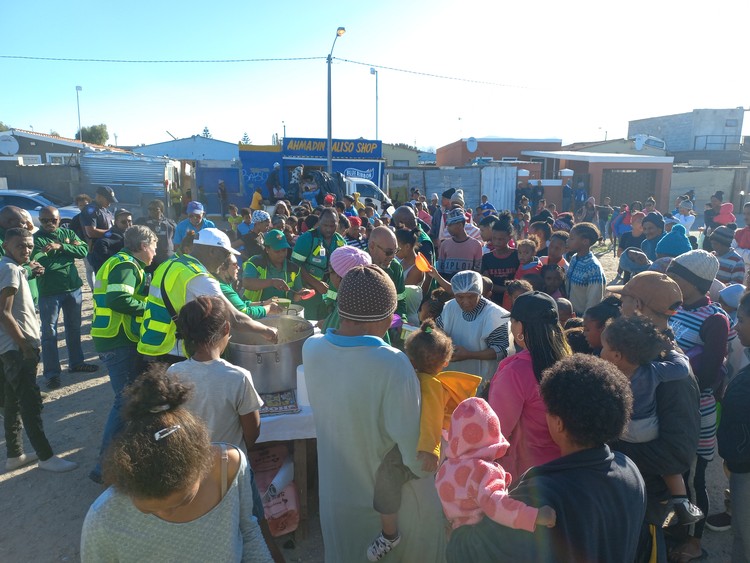 Emergency Medical Services workers based in Mitchells Plain joined Philippi grandmother Anna Williams on Monday to feed over a hundred residents, most of whom were young children. Photos: Siphokazi Mnyobe

“People are used to only seeing paramedics when someone is sick, but today they came to make the kids happy,” said Anna Williams of Heinz Park in Philippi.

On Monday, Emergency Medical Services (EMS) personnel based in Mitchells Plain joined Williams to feed over a hundred people, most of whom were young children. The street was abuzz with elderly people cheering as the children danced to music with EMS members after their meal.

The paramedics say they are trying to build positive relationships with the youth in the community in which many of their own crews have been attacked.

“I stay in a disadvantaged community where mothers are unemployed and depend on a child support grant. To see EMS support my work motivates me to not give up,” said 72-year-old Williams.

She has run a soup kitchen from her RDP house for five years and buys the ingredients using her R1,980 old age grant. She said she tries to make a warm meal for the children at least twice a week and sometimes once over the weekend when she can afford to do so. Her staple meals are vegetables and rice, samp or soup.

This is sometimes the only meal the children will receive on the day. Williams said that as one of the elders in her street, she feels obliged to comfort and feed the children who are in desperate need of it.

After two years of running the soup kitchen out of her own pocket, Williams approached a local bakery to sponsor her. This allowed her to start her food garden and grow the vegetables she uses for the soup kitchen.

Philippi resident Amanda Beukes brought two young children. She is unemployed and said she relies on Williams’ meals. “Sometimes I don’t even have money to buy a loaf of bread. Grandma Ann helps us a lot by feeding our kids. Today, they got rice, with chicken and veggies and it was so nice,” said Beukes.

EMS worker Berenice Isaacs said she first noticed Williams dishing out food to the children while she was picking up a patient. Seeing Williams’ selfless act and how great the need was in the community, she rallied her colleagues.

“We often hear crime stories about Philippi and we forget that there are good people in the area. I was touched to see her sharing her own food with kids,” she said.

Isaacs said some of her colleagues have post traumatic stress after being robbed at gunpoint in the townships where they work.

“By doing these initiatives, we hope communities will see us as human beings who come to help people in their most vulnerable moments and no longer rob us,” said Isaacs. 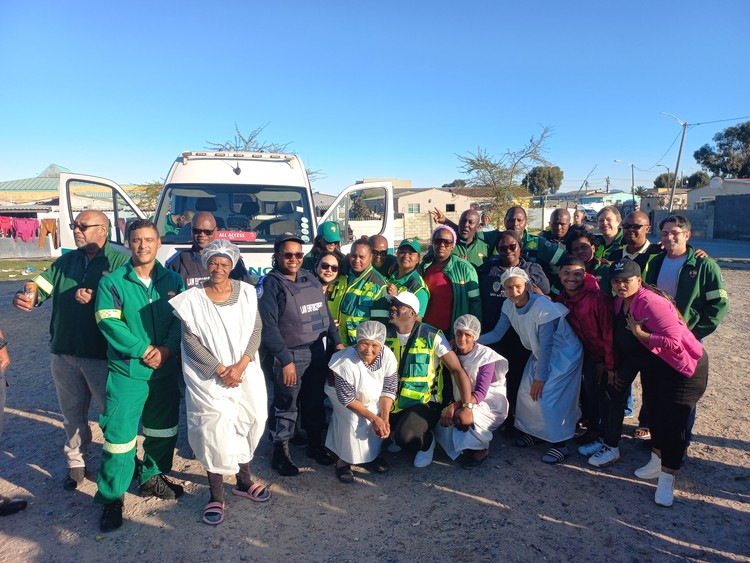 Paramedics from Mitchells Plain helped Anna Williams and her volunteers feed children in Philippi in a bid to foster healthier relationships with the youth in the township.

Next:  NUMSA’s interdicted national congress to proceed — but a court challenge looms