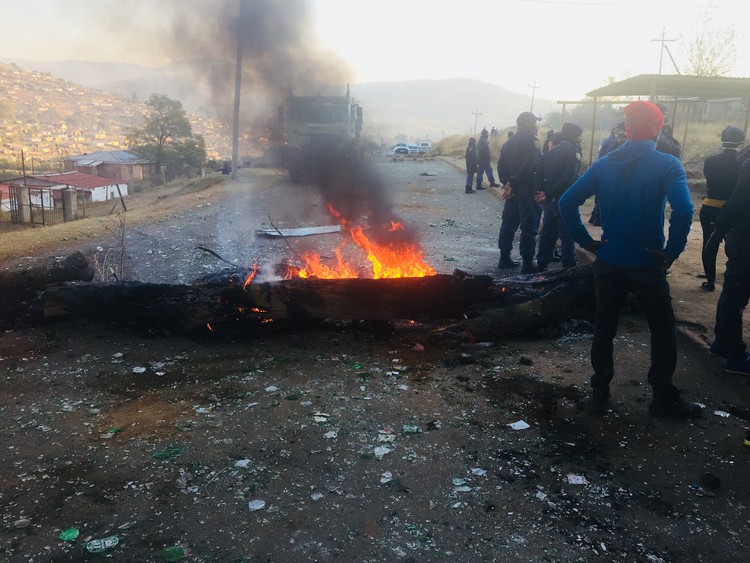 Roads in Snathing in Pietermaritzburg were barricaded with burning tyres on Tuesday by about 50 protesters demanding that power be restored immediately. Photo: Nompendulo Ngubane

Roads in Snathing, Unit H in Pietermaritzburg were barricaded with burning tyres on Tuesday by about 50 protesters demanding that power be restored immediately. The area has been without electricity for ten days after a stabstation exploded.

This is not the first time residents have taken to the streets over blackouts in Snathing. In June, roads to surrounding areas and schools were also shutdown due to the sporadic outages.

Ward councillor Sipho Madonda on Monday told GroundUp that Eskom refused to fix the substation which regularly explodes due to illegal connections made by residents.

Community member Andile Kheswa said they took to the streets when Madonda did not attend a meeting they had arranged. “We wanted to tell him what we are going through for many days,” he said.

“We bath using cold water. Our phones are off because we can’t charge them. Some of us are unable to do anything. The area is dark and it is dangerous for those who return from work at night,” said Kheswa.

Another protester who asked not to be named said, “We are tired. Residents have tried all they can. Communication with our ward councillor has failed. The only message these leaders pay attention to is when we burn tyres. We decided to take our frustration to the streets. They will notice and hear.”

But Madonda said he had met the residents. “I broke the regulations and met with four members of the community. I explained to them what Eskom said about the blackouts. Today (Tuesday) I went and spoke to Eskom. The substation has exploded. According to what I was told, this is a result of many illegal connections in Unit H. They refuse to fix it until the community disconnects the illegal connections,” said Madonda.

By mid afternoon, police had dispersed the protesters using teargas to open the road.