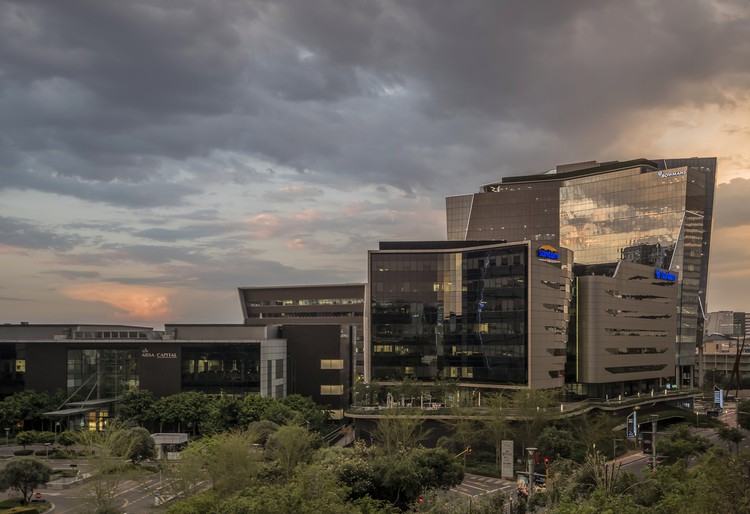 In September, Sanlam announced that it had awarded its newly appointed CEO Paul Hanratty a package potentially worth between R161 million and R500 million. Photo: Sanlam Building, Sandton by Paul Saad (CC BY-NC-ND 2.0)

On 17 September 2020, Sanlam announced that it had awarded newly-appointed CEO Paul Hanratty a share-based remuneration package potentially worth between R161 million and R500 million.

Just weeks into his appointment, Hanratty was awarded three million Sanlam shares at zero cost, and is tagged to get another two million within a few years. He will own the shares in five years if the company attains certain performance targets. These targets will not be revealed to shareholders until the company releases its annual report next year. In the meantime, Hanratty will receive dividends on these shares as if he already owned them.

In response to the announcement, Bishop Jo Seoka of Active Shareholder suggested that Sanlam executives must despise their customers. The sentiment is indicative of a widening gulf, in both wealth and values, between the top 0.1 percent and the rest of the country, many of whom are customers of companies like Sanlam.

While Sanlam’s egregiously generous gift to Hanratty is shocking, it is also not a surprise. South African companies have a global reputation for the bloated remuneration of their senior executives. Sanlam’s announcement is simply the latest example of a company completely out of touch with the context in which it operates. This phenomenon, unchecked by government or institutional investors, is one of the reasons why South Africa’s wage inequality is one of the highest in the world, and has in fact increased since the end of apartheid.

For at least the past twenty years, the directors of listed companies have dished out enormous financial rewards to executives, while the remuneration of the lowest paid employees in their organisations has remained largely unchanged. The justification for these rewards is that they attract scarce talent and ensure outstanding performance from the companies. It is becoming increasingly difficult to accept this excuse in light of recent events at Steinhoff, Tongaat, Nampak, Woolworths and Sasol, to name a few.

The real reason is that it is in the interests of all the parties involved in determining executive compensation to set the ‘market rate’ extremely high.

This small group of elite beneficiaries includes the lucky executives, their generously compensated remuneration committee members, and the expensive remuneration consultants hired to advise on the development of unnecessarily complex remuneration policies and packages. Crucially, this group also includes the highly paid executives of the asset managers that own the largest chunks of JSE-listed companies.

The King Code requires companies to explain how executive pay is fair and responsible in the context of overall employee pay. But there is no requirement for listed companies to disclose the pay of any employees other than prescribed officers. This means that every company can claim that executive pay is fair and responsible, without having to produce any evidence to back this up. If listed companies were required to publicly disclose the pay of all employees, it would be much harder for those companies to hide behind vague references to value creation. As it is, executive remuneration in South Africa appears to be untethered to any objective measure of fairness.

Shareholders perform a limited but vital check on the process and recent events have shown that they are sometimes willing and able to vote against board proposals on executive remuneration. However, this is almost entirely in response to situations in which there is a steep loss of shareholder value, and not to the fact that the remuneration is objectively excessive. The fact that these votes are “advisory” only, and not binding on the company, serves to further entrench the power of the elite few who determine their own compensation.

Many of the shareholders with the power to pressure companies on executive pay are asset managers which are themselves listed on the JSE. These include Coronation, Ninety-One, and investment management subsidiaries of Old Mutual, Sanlam and all the major banks. The executives of these listed entities benefit from the same self-serving remuneration system as their investee companies, and therefore have no interest in tackling the problem.

How could Coronation Fund Managers, for example, take a stand on excessive pay when its own top executives benefit from enormous payouts, the details of which are hidden from the public? We are told what the two executive directors are paid each year: CEO Anton Pillay’s total remuneration for 2019 was R18.3 million. Coronation’s CFO changed midway through the year, rendering comparison pointless. However, in direct contravention of the Companies Act, Coronation does not disclose information on the variable remuneration of its prescribed officers. All that is known is that 30% of net pre-tax profit is used each year to reward employees over and above their basic pay. In 2019 this 30% amounted to almost R500 million.

The one small ray of hope in recent years was Old Mutual Investment Group’s vote against Old Mutual’s 2019 remuneration policy, an important and commendable indication of the team’s independence and commitment.

The current flawed remuneration system benefits a few key decision-makers, including corporate boards, board remuneration committees, remuneration consultants and institutional investors, and ignores the interests of the tens of millions of ordinary pensioners, savers and investors in this country who depend on those decision-makers to manage their money responsibly. While paying lip service to tackling growing inequality in South Africa, in reality this group supports and entrenches a system which is an integral part of perpetuating it.

To address spiraling executive remuneration, a concerted, coordinated effort is needed from asset managers to hold investee companies accountable, demand transparency about wage inequality and call on regulators to introduce a binding vote on executive remuneration. Ordinary savers can and should add their voices to this effort by using their power to withdraw their savings and investments from the investment managers who are so clearly complicit in maintaining the status quo.

The authors are Responsible Investment Researchers at Just Share.

Views expressed are not necessarily those of GroundUp’s.