Ayanda Ntuthu has not been suspended. The NPA says it is the education department’s responsibility to find out if its employees have been prosecuted, but there is no easy way to do this. 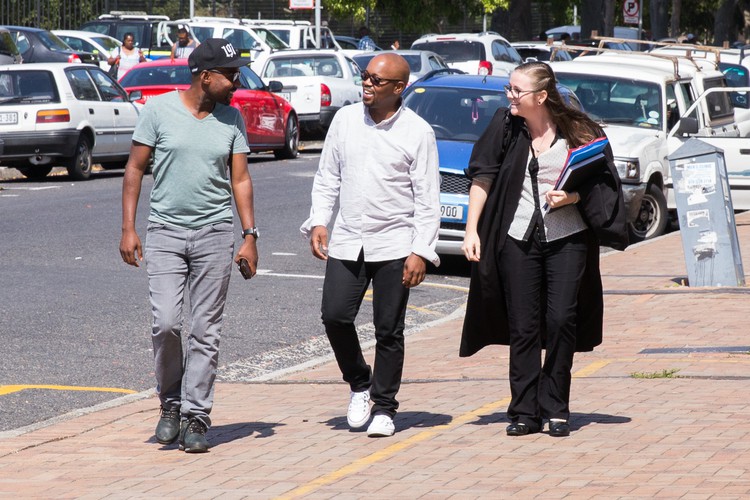 Ayanda Ntuthu (centre) outside the Wynberg Magistrate’s Court in January 2018. He was finally convicted on two counts of sexual assault in March 2022. Archive photo: Ashraf Hendricks

The state prosecutor will ask the Wynberg Magistrates Court to place Ayanda Ntuthu, a Cape Town teacher found guilty of sexually assaulting a learner, on the National Register of Sex Offenders when he is sentenced on 20 June.

Western Cape spokesperson for the National Prosecuting Authority (NPA) Eric Ntabazalila said the request to put Ntuthu on the sex offenders register will form part of the state’s arguments for Ntuthu’s sentencing.

We reported on Monday that Ntuthu was found guilty on 18 March of sexually assaulting a learner at Thandokhulu High School in Mowbray in 2017. Five years after the incident Ntuthu is still teaching at the school and the boy is also still at the school.

The matter was first heard at the Wynberg Magistrates Court on 31 August 2017 but the charges against Ntuthu were dropped on 22 May 2018 after several postponements. The matter was reinstated on 17 September 2018 and Ntuthu was found guilty of two counts of sexual assault.

Ntuthu is currently on sick leave. GroundUp has seen a message sent by Ntuthu in which there is a photo of him in what appears to be a hospital bed. He accuses others of spreading lies about him.

Asked why it had taken nearly five years for the court to reach a guilty verdict, Ntabazalila said although the NPA would like each case to have a speedy turnaround, “some cases are complicated as they have more than one accused and some get complicated as they progress with trials within trials forming part of the case”.

“Also, one needs to take into consideration that there are other parties in each case which may affect the progress. In most instances, it’s situations beyond our control that cause delays,” said Ntabazalila.

He said in Ntuthu’s case, the complainant “disappeared and couldn’t be traced”, resulting in the case being withdrawn. (This doesn’t square with what the prosecutor told the court in 2018, which is that witnesses couldn’t be located because the investigating officer had been on leave.)

After the state was refused another postponement, Ntabazalila said a new investigating officer was appointed and was able to find the complainant and have the case reinstated.

However, when the trial resumed it was unable to proceed swiftly because of Covid, loadshedding, machines not working in court, defence witnesses not being in court “and other reasons”, Ntabazalila added.

Western Cape Department of Education (WCED) spokesperson Bronagh Hammond previously said they were awaiting feedback from the NPA on the outcome of Ntuthu’s case before considering disciplinary steps.

Asked why the NPA had not informed the WCED of Ntuthu’s guilty finding, Ntabazalila said it is not their responsibility to inform them of the progress and outcome of the case.

In response to this, Hammond said, “We can only engage or ‘monitor’ a case if we are informed of the case”.

Ntuthu is currently still employed by the WCED as an educator. Hammond said they cannot act against him, even if found guilty, because they need to follow processes outlined by the law. The department has, however, initiated steps to suspend Ntuthu, said Hammond.

“The WCED is of course concerned and tried to take the matter further in 2017. We cannot dismiss an educator without following due process within the confines of the law. We did not have witnesses to testify and therefore could not proceed. We investigate every case brought to our attention,” she added.

Hammond said in 2021, the department received 19 complaints of sexual assault at WCED schools, of which five were found guilty and three were deemed dismissals.

In the same year, the department received 15 reported complaints of sexual harassment at WCED schools, of which one was found guilty.

Meanwhile, Molo Songololo, a non-profit organisation that advocates for the rights and protection of children, said they are calling for an urgent intervention to suspend and dismiss Ntuthu from the school and from teaching.

They are also demanding that an urgent investigation is lodged into the barriers to gathering witness statements, which caused the case to be postponed multiple times and eventually withdrawn.

“Educators and the WCED have a duty to protect learners and adhere to child care. Protection policies and procedures failing to do so, have serious consequences for the safety of learners,” said Patric Solomons, director of Molo Songololo.

He said although they welcome the guilty verdict against Ntuthu, they are “deeply concerned” about the barriers experienced in the initial investigation and prosecution process.

“[T]he alleged offender was allowed to continue to teach and have contact with learners at the school attended by the victim and possible witnesses,” said Solomons.

Molo Songololo has also written to the Western Cape Commissioner for Children, the South African Human Rights Commission, WCED and the office of the Premier to, among other things, to investigate the possible negligence of implementing policies and procedures to protect the victim, witnesses and learners at Thandokhulu High School.

Equal Education (EE) in the Western Cape is also calling for Ntuthu to be dismissed immediately.

EE said it will ask the newly appointed provincial education MEC David Maynier to meet and speak about how the WCED handled this case and implements its Abuse No More Protocol to help learners safely report abuse.

“Many learners don’t trust they can report wrongdoing by a teacher without being victimised or not taken seriously.

“Having specific and safe ways for learners to report harassment, rape and sexual assault is vital. The Abuse No More Protocol and the Department of Basic Education’s development of the Protocol Relating to the Management and Reporting of Sexual Abuse and Harassment in Schools are important steps in the right direction,” EE said.

Next:  Children can’t get into Cape Town schools, court hears