About 300 Durban climate activists picket against oil and gas exploration 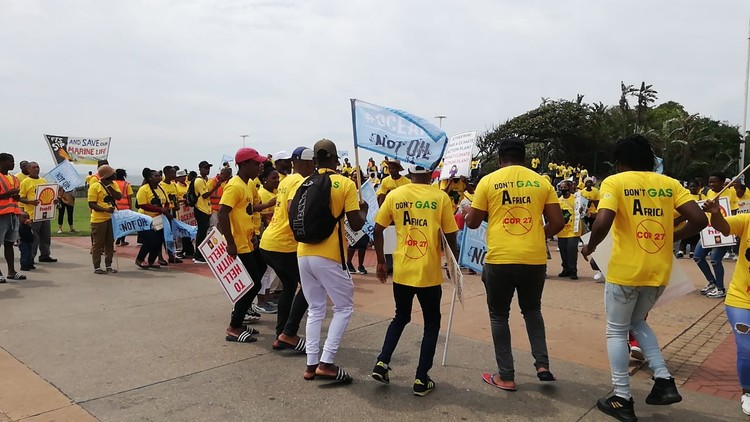 Hundreds of people from several organisations picket along the beach front in Durban on Friday morning against oil and gas exploration along the east coastline. Photos: Benita Enoch

About 300 people from several organisations picketed against oil and gas exploration along South Africa’s eastern coastline outside Durban’s Suncoast Casino, Hotels and Entertainment on Friday morning. Earlier they marched along the Suncoast promenade.

The picket was led by members of the South Durban Community Environmental Alliance (SDCEA) who wore yellow t-shirts which read: “Africa will fry” and “Don’t Gas Africa” while singing in front of the entertainment spot. Some people travelled from as far as Ulundi, Richards Bay and Empangeni to join Friday’s action.

In a statement, the organisation said, “Residents of Durban are raising awareness about the negative impacts of fossil fuels on the poor and marginalised along the entire value chain, from exploration to extraction to processing and refining to transport to combustion. In each case, Big Oil firms and the petrochemical complex in and around Durban and Richards Bay are playing a life-threatening role, while recording unprecedented profits.”

Some of the demands in their memorandum include calls for: an end to new coal, oil and gas fossil fuel projects; an end to fossil-fuel corruption within the departments of Minerals and Energy, Public Enterprises, and the Presidential Climate Commission; and, for PetroSA and other state agencies to be investigated for irregular coal-fired power plants deals. 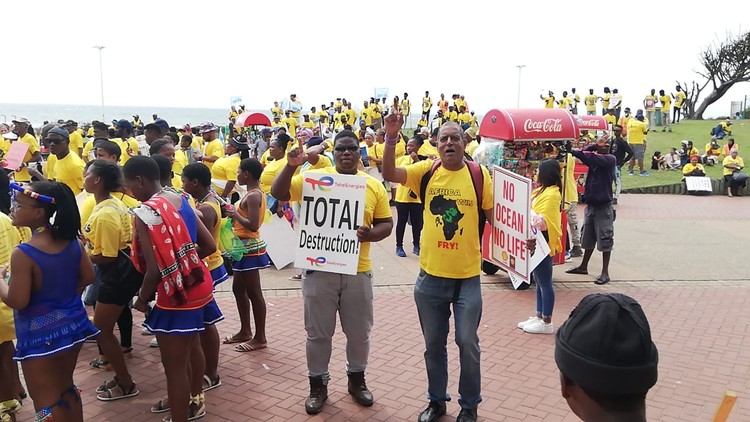 D’Sa told GroundUp that attempts to discuss the matter with this company have been fruitless. He added that talks with the government have also been unsuccessful.

He pointed out that the eThekwini Municipality was not prepared for the devastating floods earlier this year.

Israel Nkosi, a leader at the Mfolozi Community Environmental Justice Organisation, said that the government only approaches citizens when it wants votes. “But when we want action, we as the decision makers don’t get heard. Why are decisions made on our behalf?” he asked.

“This isn’t just about eThekwini but the entire KwaZulu-Natal. We are all affected by climate change and something needs to be done,” he said.

Suncoast’s response to our questions will be included once it is received.

Next:  “We begged them not to take our belongings”

Previous:  eThekwini flooded with sewage due to treatment plant failures