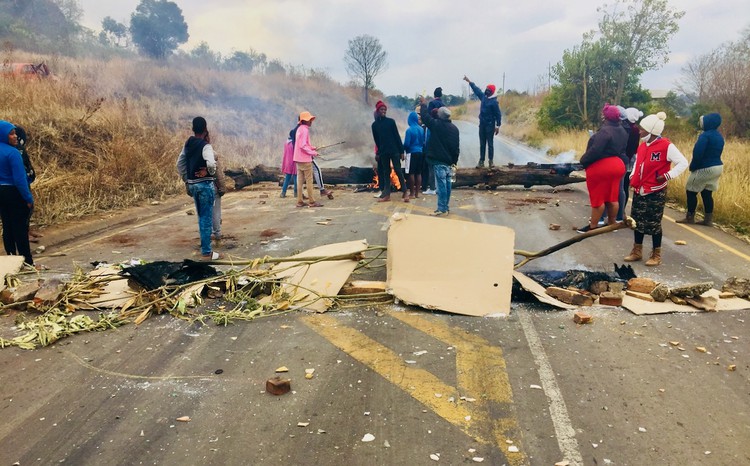 Twenty-four people were arrested on Monday during a protest against ANC ward 29 councillor Spha Madlala in Pietermaritzburg.

Residents blocked roads in Copesville and Haniville in the early morning. Cars, including police vehicles, were pelted with stones.

“We will stop protesting once they remove Madlala from the office,” said Bongumusa Thwala.

Thwala said residents have been protesting against the ward councillor for a long time. The spark for the protest this time was that members of the community were not employed in a project that will see 1,176 houses built in Ngxalane.

Thwala said people from Elandskop and Msinga had been employed instead.

Mondli Dube said: “The housing project in Ngxalane was not introduced to the community. We were not told about it. We woke up and saw people working there. Those people are not part of the community.”

Nonto Mdunge said: “Since 2016 we have been taking it to the streets to voice our complaints. It has come to a point where we are fed up … They must give us a chance to vote for someone who would make a difference in the ward. That person must be our ward councillor until the official local government elections [next year].”

But Councillor Madlala said the community was addressed and briefed about the project before it started in January.

“The contractor came with its own people. We also employed residents from all the nine areas,” said Madlala.

“It’s political interference by those who want me removed … Many attempts have been made … There is a division in the ward and there is no peace,” he said. “I was chosen by people of ward 29 not by a few individuals. If the people who voted for me want me gone, they will follow the right channels to do so.”

Captain Nqobile Gwala of KZN SAPS said Mountain Rise station is investigating a case of public violence. She confirmed that a 24 people were arrested.

“They are expected to appear in the Pietermaritzburg Magistrate’s Court on Tuesday,” said Gwala.

Next:  Protest over toilets turns violent in Uitenhage

Previous:  Questions for a sex worker