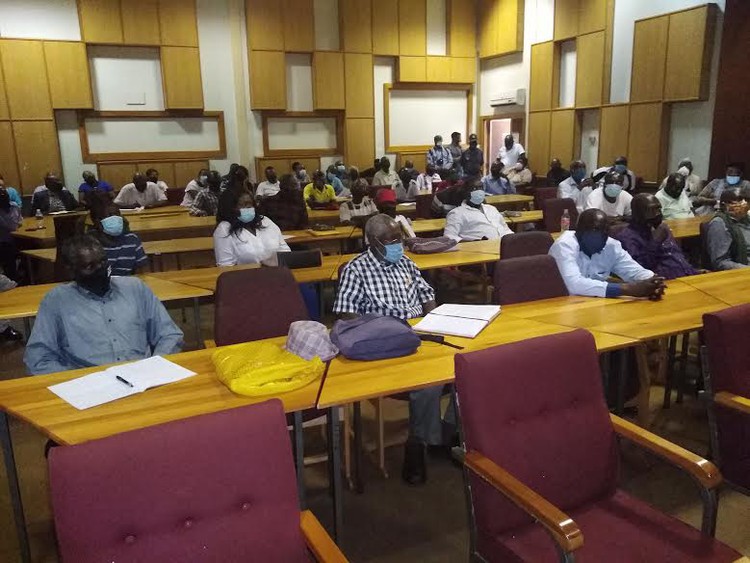 Villagers who were displaced by the construction of the Nandoni Dam and who have not yet been compensated for the loss of their farm land met Deputy Minister of Water and Sanitation David Mahlobo on Tuesday. Photo: Bernard Chiguvare

The families affected by the construction of Nandoni Dam, who have been fighting for compensation for two decades, are to be paid by December, according to the Deputy Minister of Water and Sanitation, David Mahlobo.

At a meeting in Thohoyandou on Tuesday, Mahlobo promised that villagers whose issues were not complicated would be paid by Christmas.

He said he would return to check progress in mid November. “I apologise on behalf of the government but please be patient. Judge us from the progress we are making now,” said Mahlobo.

A total of 33 villages were affected when construction started on Nandoni Dam in Limpopo in 1998. Villagers lost crop land and fruit orchards and 405 homesteads had to be relocated. Among the villages affected are Ha-Budeli, Ha-Mutoti and Mphego, Tshilungoma,Tshitomboni, Tshaulu, Dididi and Mulenzhe.

The Tuesday meeting followed a meeting in March when Mahlobo agreed to fast-track the process of compensation. He set up a help desk and appointed a company to determine the validity of the claims and the amount of compensation to be paid.

The leaders of the Nandoni Complaints Resolution Committee, which represents about 1,400 claimants, Solomon Baloyi and Gilbert Netshivhambe, expressed satisfaction. “I am happy with what the Deputy Minister promised. As long as the Deputy Minister monitors the process and makes sure officials in his department work, I now have no doubt we are going to be compensated,” said Baloyi.

But not all the villagers were as optimistic. Demanding the chance to speak at the end of the Tuesday meeting, Edward Sediki from Bungeni village asked, “Why does the government keep on postponing paying us? This has taken too long a time and we are tired of this.”

Next:  MPs give Home Affairs and City a tongue lashing over refugee camps