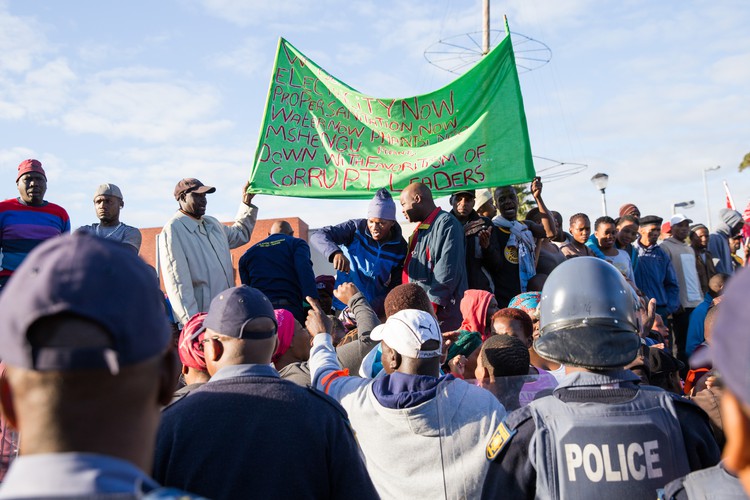 About 100 residents of Imizamo Yethu in Hout Bay protested outside the police station on Monday. They were demanding electricity, sanitation and water from the City of Cape Town.

The protesters were victims of the devastating fire a year ago that left thousands of people homeless. They wanted to hand a memorandum of demands to ward councillor Roberto Quintas, PR councillor Bheki Hadebe, and the Mayco Member for Human Settlements, Xanthea Limberg.

In the memorandum, read out by Mzukisi May, residents demanded: adequate sanitation; the upgrading of the informal settlement to be done in a constructive, transparent and collaborative manner; fortnightly engagement between the City and community leadership; and a detailed plan to be agreed on by the end of April for the reinstatement of electricity in Dontsa Yakhe, Shooting Range and Ebhayi sections of the informal settlement.

The memo was signed by Quintas and Hadebe. Limberg did not appear.

“We have been crying for help but no one is listening to us,” sang the residents.

The protest was met by a large presence from the South African Police Service (SAPS) and Metro Police.

Community leader Pamela Sofika said that provision of electricity was a priority. She said the community had cooperated with the City and thought they had a good working relationship, but were becoming discouraged.

“For a year now the City has not installed electricity [for us], but they are installing electricity for the people who were fire victims in February this year,” she said. “We have no toilets, no taps a year since the fire and there seems to be no initiative to make sure that those services are provided.”

Single parent Nontsasa Senti, who lives with her daughter in a shack, told GroundUp she uses gas and paraffin which is expensive for her as she is unemployed.

“I struggle to even iron my child’s school clothes. I have to go ask neighbours in the formal housing every morning,” said Senti.

“For how long must we go around asking to use toilets from other people?” she asked.

The City was given until the end of April to respond to the memo.

“I will not be able to speak on any of the issues that are currently under litigation and under the court proceedings,” said Quintas, referring to the court case where some residents have opposed a City interdict against them rebuilding.

Quintas said about 150 to 200 households would have to be relocated to service sites in order to make way for a road which would then allow for the provision of bulk sanitation and three substations for the electrification of all of Imizamo Yethu. He said the process would take 24 months if there were no “stumbling blocks”.