Workers told to eat and change under a tree 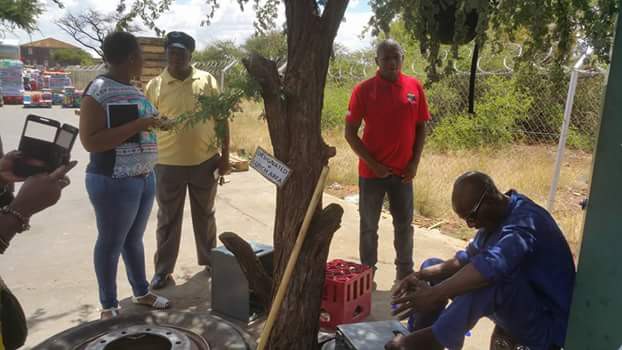 Workers at a Northern Cape have to eat and change here. The sign says “designated lunch area”. Photo: Tichaona Jongwe

By Ray Mwareya and Tichaona Jongwe

Workers at a Northern Cape company, Icesebise, have been told to use a tree as a canteen and to change in the open. The Department of Labour has taken up the case.

“Icesebise management have designated a spot under a tree on dirty ground as the food canteen and changing room,” said SA Commercial, Catering and Allied Workers Union (SACCAWU) Northern Cape organiser Jerry Mmoneri. “It´s unthinkable that grown-ups are forced to change clothes under a tree.”

Mmoneri said he had visited the company in December 2016 with officials from the Department of Labour in the Northern Cape. The department had issued the company with a “Compliance Order” to stop putting lockers under a tree, and provide changing rooms and a canteen for workers.

Managers had allowed only brief access to the premises.

The Department of Labour in Kuruman confirmed that the company had been issued a compliance notice and said inspectors would visit Icesesbise again this month to see if the company had complied.

An Icesebise spokesperson who identified himself only as “John” denied that workers had been forced to use an open air tree as a canteen. He said workers had chosen to relax at the spot on their own.

He said the lockers were “tool storage rooms” but workers said they were “changing rooms.”

“Our workers are well cared for,” he said.

However a photo taken by one of us on 1 December shows a clear sign saying “designated lunch here” pinned to a tree on dusty ground as well as lockers dumped under a tree.

Icesebise is a foodstuff wholesaler and employs about 20 workers.

A 34-year-old sweeper at the company, who did not want to be named, said last September workers had asked for a place to eat the food they brought from home. “We were angrily told to use the tree spot because the company is on a cost-cutting exercise. Next thing we saw a sign and metal tins put up a week later, designating the tree as the official canteen and change room.”

“How can we change clothes and expose our bodies under a tree in 2017? Managers have a clean room to eat free lunches, why not us?”

COSATU deputy general secretary Solly Phetoe said he had also visited the company. “These are black African workers and management of the company is white, and managers have got nice facilities,” he said.

“John” angrily refuted the allegations. “Who sent you to investigate this? These are lies created by business rivals to steal our clients. We didn’t erect that tree canteen sign,” he said before terminating the call.

A SACCAWU spokesperson said that as of 2 February the “compliance order conditions have not been respected.” On the same day GroundUp walked past the company premises. The “tree canteen” sign has been taken down, but workers still eat food from their lunchboxes under the tree. The outside change room lockers are still in place, he says.

The Department of Labour committed to returning next week to assess if the compliance order has been respected.