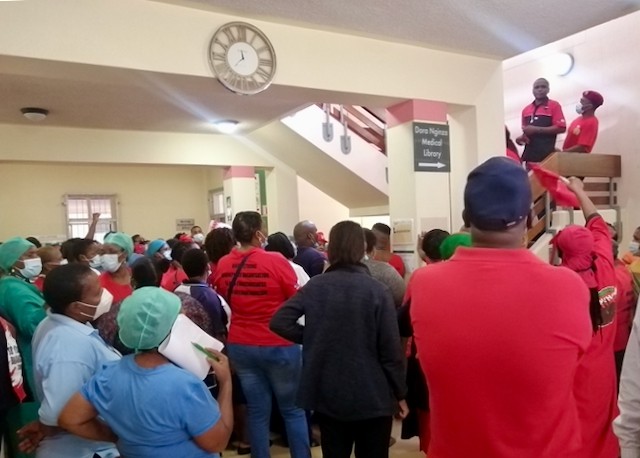 Workers at Dora Nginza Hospital in Gqeberha, including general workers, nurses and administration staff, downed tools from 9 to 11:45am on Monday in protest over outstanding performance payments.

On Friday a meeting between management and workers, who demanded to know the exact date they will get Performance Management Development System (PMDS) cash bonuses, ended unsatisfactorily for the workers.

A worker said they were told on Monday they will be paid on 14 April, and staff went back to work. However, shop stewards were instructed to get this undertaking in writing.

South African Federation of Trade Unions of South Africa regional secretary Mzikazi Nkata said, “PMDS is a national crisis. We feel that the Department is not appreciating the workers’ good job. Since 2019 we have not received PMDS [payments].”

Nkata said health workers felt insulted by the criteria being used. “The Department treats us as if we don’t know our job and we don’t deserve what we are asking for,” said Nkata.

“We lost many workers to Covid-19, some retired and others resigned and the vacancies have not been filled … Even at top management there are lots of vacancies and this leads to poor service delivery.”

“We are sick and tired of being told that there is no money although we work under these depressing conditions,” said Nkata.

The PMDS assesses competence levels and performance of an employee based on various criteria agreed between them and their supervisors. It is scored on a 5-point scale, from unacceptable (1) to “significantly above expectation” (4) and “outstanding” (5). Cash bonuses are awarded at the two top levels.

“Out of 5 points we are not allowed to get more than 3,” said Nkata. “If you get above 3 the management says that is impossible unless you are a magician. They want us to remain at 3 points in order for us to be not eligible for an increase.”

A patient Nothozamile Stuurman, 65, said, “I arrived here at 9am for my chronic check up. But there was no clerk to help me and other patients with our medical files … The staff was up and down protesting in the wards.”

Provincial health spokesperson Sizwe Kupelo said, “The PMSD payment process of Dora Nginza Hospital is underway and we have informed the CEO of the hospital.”