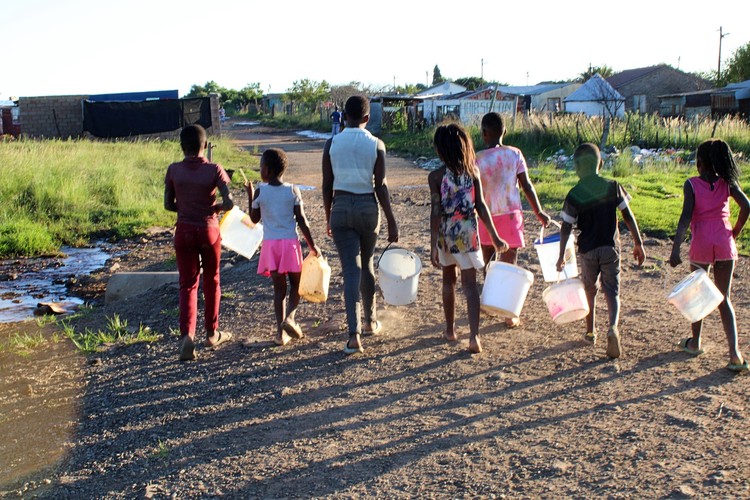 When water tanks near their homes are empty, children living in Mountain City informal settlement walk almost two kilometres to fill buckets for their families at a communal tap. Photos: Masego Mafata

Waterworks is an informal settlement located in southern Johannesburg, near Lenasia. A water supply mainline runs between the settlement and Lenasia. And yet, like thousands of other residents in this area, families in Waterworks have been dealing with an erratic water supply for months.

Johannesburg Water uses tankers to fill communal tanks in Waterworks and other settlements, such as Thulamtwana, Mountain City near Walkerville, and Nana’s Farm located between Eldorado Park and Lenasia.

But there are no tarred roads in most of these informal settlements and some of the gravel roads are impassable for the water trucks. Because of this, some tanks are never filled and residents must walk to the nearest tank which may be a kilometre or more away.

Four to five days, sometimes a week, will pass as residents wait for water to be delivered to their tanks. There are 25 water tanks in Waterworks and 41 in Mountain City, according to Johannesburg Water. Its spokesperson, Puleng Mopeli, says there are 5,000 people in Waterworks.

Residents living in Mountain City said there are about nine blocks in the informal settlement, each with about 1,000 households.

A resident of Nana’s Farm, who asked not to be named, told GroundUp that some residents have resorted to fetching water from a stream on the other side of the “busy and dangerous” N12 freeway. “The water is not even clean water; it is water from a dirty stream but because we are desperate, we have no choice but to use that water.”

“We had to beg for this water to be delivered,” said community leader Dumisani Mathebula, a member of Asivikelane, an organisation focused on service delivery challenges that has engaged with ward councillors and the director for Region G, Mickey Padiachee.

Mathebula said a single service provider was supplying water to about 43 informal settlements in the south of Johannesburg. He said the contractor was not properly monitored by the City and did not have enough trucks to supply all the settlements adequately.

Mathebula said they had reached an agreement with Padiachee to meet regularly and “address water issues in region G”. “We are hopeful that things will be better going forward,” he said.

Tanks were then provided to Waterworks, which Johannesburg Water promised would be filled daily using water tankers “on a continuous basis”.

Residents of Mountain City say that most of their water tanks were also installed in 2020 and the same promises were made. There is approximately one water tank for every 50 households in Mountain City.

But tanks empty quickly, residents say. “It’s worse for people who work because, by the time they come home, the tanks are empty so they won’t get water,” said Mountain City resident Nomaledi Ramodibe. She said residents used social grant money to buy water from households that had taps in their yards and paid R10 for a 20- to 25-litre bucket.

Each day, Ramodibe said, she must fill six 20-litre buckets with water to use for washing and cooking, but this is often not enough for her family of six.

“When the children come home from school, they need water to wash their uniform but they often can’t because the water is finished,” she said.

Julia Phora, who also lives in Mountain City and is a member of Asivikelane, said there is underground water and the City should install the appropriate infrastructure. “People’s houses flood because of this water that is underground. We could get boreholes which would put this water to good use,” she said.

Asivikelane member Bonginkosi Ndlovu said that the cleaning of water tanks was also an issue.

Johannesburg Water told GroundUp that the tanks are cleaned every six months, and the tanker trucks are inspected, cleaned and sterilised once a month.

But Ndlovu disputes this. “Since they installed these tanks in 2020, I don’t recall them being cleaned. People have found foreign objects like condoms and bugs in their water because tanks are dirty. Many tanks also don’t have lids,” he said. But because water is such a “scarce source”, people had no choice but to use the water even when it was dirty or contaminated.

In a written response to GroundUp’s questions, Johannesburg Water spokesperson Puleng Mopeli said that “the previous contract for delivery of water to informal settlements ended”. Mopeli said that “we don’t [currently] have a valid contract in place” and “the tender process is taking longer than anticipated”. This meant that there was a limit to the number of loads that could be delivered per day.

Mopeli confirmed that only one service provider is appointed to deliver water to the informal settlements in Region G.

Johannesburg Water did not respond to our follow up questions or questions regarding the specific challenges with the tanking contract. 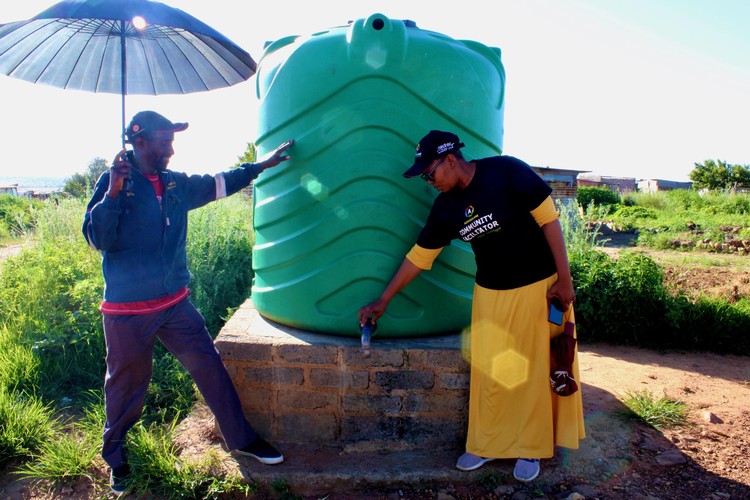