He accuses Cosatu of “bootlicking” Ramaphosa who “will never liberate workers” 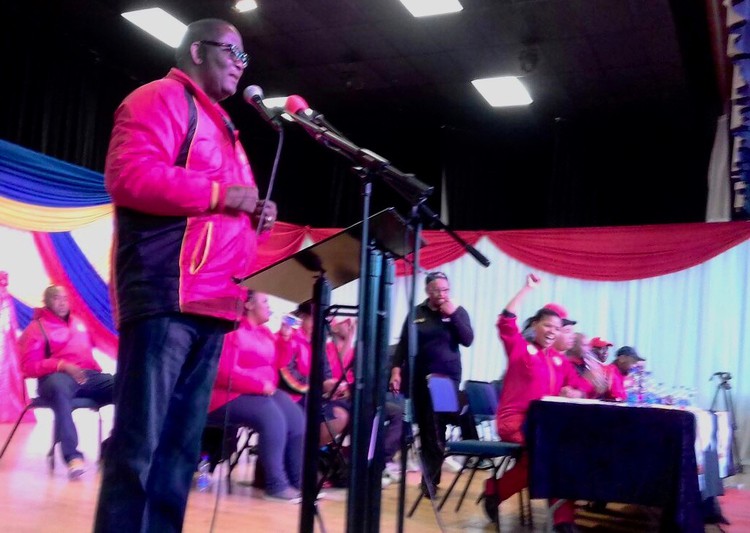 Addressing hundreds of jubilant workers at Nangoza Jebe Hall in New Brighton, Port Elizabeth, Vavi said the workers should start to organise themselves in preparation for a new revolution that would bring back mines, land and result in a better life for all.

He said the ANC has distanced itself from the people as it was busy with factional battles.

Vavi encouraged workers and unemployed people to join the recently formed South African Federation of Trade Unions, Saftu, of which he is general secretary.

“In 1994, we wanted to create a democratic, united, non-sexist, non-racial and prosperous society. We wanted to end the oppression of the black majority by a small white minority,” he said.

But, he said, “The issue of positions became the primary concern and preoccupation of our leaders. Our members, including the shop stewards, were given positions in management forgetting the workers. Cyril Ramaphosa, a former trade unionists and general secretary of National Union of Mines, became a billionaire in an economy that had failed to transform.”

Vavi admitted that “in the Cosatu Congress we were busy singing the Zuma praise songs. We had left the workers behind with no one to take up their issues. We were busy praising a president who was facing 783 charges that involved fraud, corruption, money laundering, and racketeering.”

He said the Marikana massacre followed. He also mentioned that farm workers in the Western Cape successfully negotiated for better wages without Cosatu. “As a result, ANC lost to the opposition, the cities of Cape Town, Johannesburg, Port Elizabeth, Pretoria and Ekhurhuleni. This is the worst trauma we have to go through.”

“The Communist Party and Cosatu of today are still repeating the same mistake we made in 2007, when we praised Zuma. They are now bootlicking Ramaphosa, not knowing that Ramaphosa will never liberate workers in this country,” Vavi said. “What we need in this country is a new struggle, a new revolution, a new process to shake and to collapse all pillars of colonialism and apartheid. The deputy president says it’s okay to pay a minimum of R20 an hour.”

He said a report by [audit firm] Deloitte showed that the top 100 companies listed on the Johannesburg Stock Exchange have CEOs earning an average of R17.9 million a year, the equivalent of R69,000 per day.

Saftu has set a target of a million members by December and would be going door-to-door.