University of Pretoria workers return to their duties on Monday 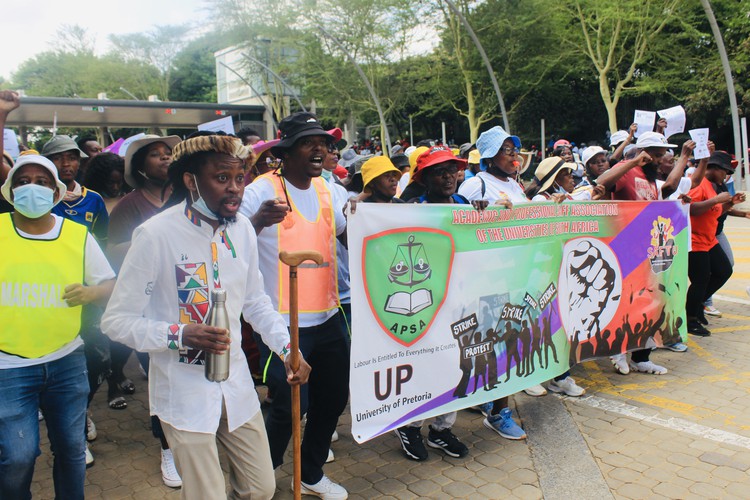 Workers at the University of Pretoria, who were on strike for over a week, returned to work on Monday after reaching an agreement with management on some of their demands at the weekend. Archive photo: Mosima Rafapa

A strike by hundreds of University of Pretoria workers has been called off following an agreement with management.

The workers, affiliated with the Academic and Professional Staff Association of SA (APSA), reported for duty on Monday 21 February, ending the strike which started on 9 February. The workers had been demanding a 10% wage increase, a once-off R3,000 payment, and better working conditions.

Union representatives have been in negotiations with management over their demands for several days. On Friday, they agreed to terms they partly drafted to the university.

APSA general secretary Boitumelo Ben Senokoane told GroundUp that they had achieved what they set out to do during the strike, which was to demand that staff be treated fairly. “Workers within the same university [should] get the same benefits and enjoy the same rights. Previously in-sourced workers didn’t go on recess while others did. Management says they’re going to take away recess period from everyone.”

“There were differences in workers’ leave, management is now going to treat everyone the same and develop a policy for all. For us it’s a win,” said Senokoane.

Senokoane said, “For us, the biggest victory is on job grading because job grading implies a possible increase in salary adjustments,” said Senokoane. He said the process is to be finalised within six months.

University spokesperson Rikus Delport said they were still working on a long-term solution to some of the workers’ demands, but that UP is confident “that any impasse can be resolved through constructive engagement and without putting the long-term sustainability of the University at risk.”

“We will continue to work with organised labour in an environment of mutual respect to address the issues it raises,” said Delport.