“We were completely shocked. We confronted the officer and asked him why he shot the dogs like that” 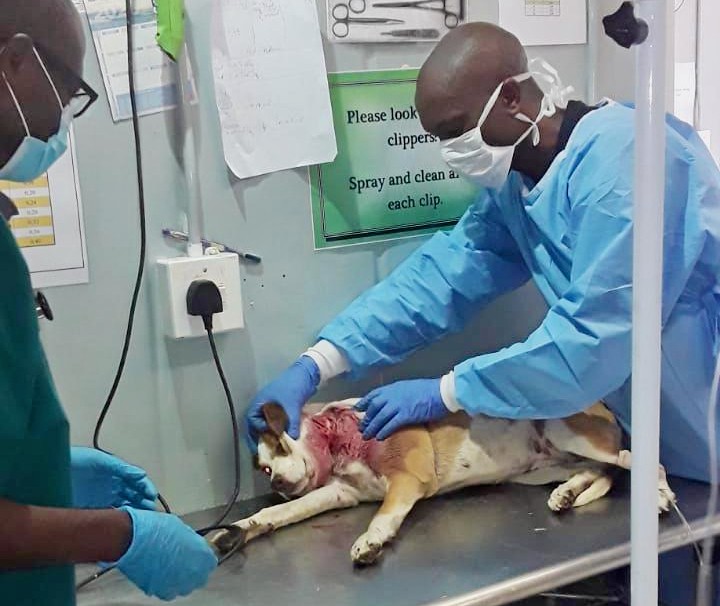 Staff at the SA.MAST Animal Clinic in Khayelitsha attend to Fifi, who was shot in the shoulder with a rubber bullet. Photo: Supplied

Two dogs in Khayelitsha, Fifi and Fido, are recovering at the SA.MAST Animal Clinic after being treated for rubber bullet wounds, allegedly inflicted by a police officer enforcing the Covid-19 lockdown.

According to Tamsin Nel, the clinic’s director, only Fido was strong enough last week to undergo surgery. On Friday, two rubber bullets were removed from his shoulder. The clinic reported the matter to Lingelethu West police station in Khayelitsha and the bullets were collected by police as evidence, Nel said on Tuesday.

Originally, the clinic did not want to risk operating on Fifi because she was suffering from a tick-borne disease which meant she would bleed excessively during the surgery. But on Monday, staff at the clinic decided that it could not wait and they operated. Fifi almost died during the surgery, which was risky because the rubber bullet was lodged milimetres away from a main artery.

“She is stable now, but we’re still not certain that she will pull through,” Nel said.

Nel said that the wounds appeared to have been inflicted deliberately, but that she did not know why the dogs had been targeted.

GroundUp followed-up with Gerald Ramoabi, a resident of I-Section in Khayelitsha who witnessed the shooting.

Ramoabi said that he was socialising with friends in a neighbour’s yard on Saturday, 27 March (the second day of lockdown), when a quarrel broke out. The quarrel caught the attention of police officers who were driving by. The police vehicle stopped and an officer jumped out with a shotgun.

“Maybe he was just trying to do his job, because everyone was tense at that time during the first couple of days of the lockdown,” said Ramoabi.

“But, the aggression with which he approached us was very obvious. The dogs reacted as many dogs would in such a situation – they growled. They did not really pose a threat to the policeman, in my opinion. They were not going to bite him. The policeman raised his gun and shot one dog, the one closest to him. Then he aimed and shot the other dog which was still in the yard. We were completely shocked. We confronted the officer and asked him why he shot the dogs like that.”

The officer apparently asked a number of questions about the gathering and the earlier quarrel. Then he got back in his vehicle and drove away.

Police spokesperson Andre Traut said that the police were investigating.

“Lingelethu-West police are aware of the incident and are looking into the circumstances surrounding the matter. The owner of the dogs declined to lodge an official criminal case,” he said.

GroundUp was not able to reach the owner of the dogs, as the number we were given went to voicemail.

Nel expressed sympathy for the challenges faced by police in enforcing the lockdown. Also, police officers in Khayelitsha regularly help animals in need by bringing them to the clinic. But what happened to Fifi and Fido was not an isolated incident, she added.

“I have seen footage of these types of shootings by police officers before, where there was no good reason for dogs to be shot. I think it is important that we get the message out: the police are being observed, these cases are being documented and there will be a reckoning.”

Vets and animal clinics are designated as essential services. The SA.MAST clinic runs a free animal ambulance service which continues to respond to animal emergencies in Khayelitsha during lockdown.

Nel said that they have already felt the economic impact of the pandemic, with local and international funding streams drying up.

“Funding we were meant to receive in March 2020, that would have covered basic operational costs - fuel in our ambulances, doctor and nursing salaries, printing, telephone, lights - has been withdrawn because the funder themselves are now in crisis due to Covid- 19. We have 59 days to turn this situation around,” said Nel.

The clinic welcomes donations from the public, which can be easily made via the clinic’s website.