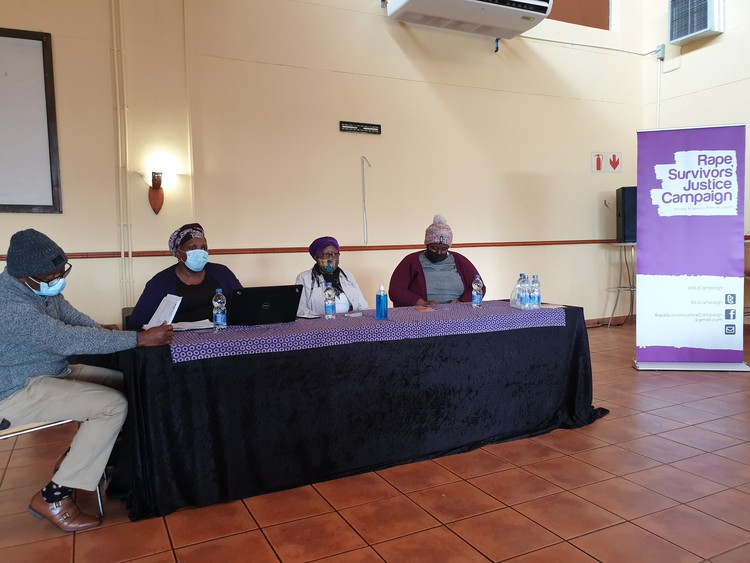 “When you are raped, your body becomes a crime scene. It is very important for a person to report a rape immediately so that evidence can be collected.” This was the advice given by Colonel Daliwonga Saki from the Family Violence, Child Protection and Sexual Offences Unit in Mitchells Plain.

Saki was speaking at a panel discussion hosted by Rape Crisis at Lookout Hill in Khayelitsha on Thursday to mark six years since the launch of the Rape Survivors’ Justice Campaign (RSJC). The campaign is for a proper sexual offences court and a safer space for survivors in Khayelitsha.

Saki told the more than 30 attendees that getting results back from DNA testing evidence was a major challenge. “Results can take three to six months or even more. Last year so many cases were taken off the court roll because of the delay of DNA results. Many cases were withdrawn.”

A woman who identified herself as Vuyiseka told the group how she was raped twice a few years ago and still lives in fear today. “There is no support in our communities when people find out that you have been raped. Instead you are called a liar and they will constantly gossip about you,” she said.

“The investigating officer in charge of my case used to chill with my rapist. I constantly live in fear. I live in a gated complex but I still don’t feel safe. I constantly feel like someone is going to break in and rape me,” she said.

Mandisa Mbotshelwa, the RSJC’s advocacy coordinator, said survivors were not reporting rape cases because of fear and how poorly they are treated by police.

“Cases end up not even making it to court because survivors are too scared to report incidents. And when they do report, the case is handled so poorly that it ends up not going anywhere,” she said.

“For six years we have campaigned for a proper sexual offences court at the Khayelitsha Magistrate’s Court where survivors can feel safe and comfortable. The Department of Justice has purchased a mobile unit for us but there is no set date on its delivery to the court,” said Mbotshelwa. She said that there are 106 functional sexual offences courts in the country.

While there is now a sexual offences court, activists have argued that it still lacks the infrastructure to make it safe for rape survivors.