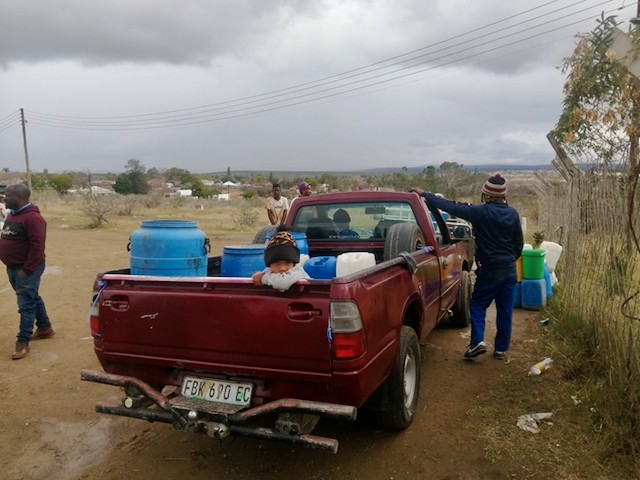 Fort Beaufort residents flocked to a water reservoir in Hillside on Monday. Their taps have been dry since last week Tuesday due to a strike by municipal water employees. Photo: Mkhuseli Sizani

Tens of thousands of Amathole District Municipality residents have been left without water since Tuesday last week because of a strike at the municipality’s water department.

The workers are striking over a wage dispute and for Covid relief funds that they say are owed to them.

This is a developing story.

Bedford, Alice, and Adelaide are among the towns affected. By Monday, Fort Beaufort shops that sell water had run out of stock. We found its residents flocking to a nearby water reservoir in Hillside, carrying empty containers. Many were fetching water with bakkies, private cars and wheelbarrows.

Bakkie owners are asking for R100 a trip from residents who live far from the reservoir. One owner, Mbuyiseli Solani, had made a tidy profit of R3,000 fetching water for people by Monday, but, he said, “The workers are wrong. They must not involve us in their wage struggles with the municipality. We need water.”

“All our local municipalities are affected, with minimal impact at Ngqushwa since the plants are operated by Amatola Water. However, we have a challenge of attending to things like pipe bursts as there is no workforce for such,” said Madikizela-Vuso.

In a press statement, Cooperative Governance and Traditional Affairs MEC Xolile Nqatha condemned a strike “that has caused great panic and a water crisis for our communities”. He said “it is criminal to close water” and it could not be justified.

“Whilst workers have a constitutional right to embark on strike or protest action, they need to understand that water is an essential service, and they don’t have a right to infringe on other people’s rights, especially from accessing water for our communities,” read the statement.

Lillian Adonis, from Newtown, a member of concerned local residents, said, “Since last Tuesday our taps have been dry. Our town and townships also don’t have water … Schools had to shut down. The boarding school had to order learners to go home during the long weekend because of this water crisis.”

Lendy Ngosa, manager at Thatcher Home, which accommodates 41 elderly people, said, “We desperately need water because we cannot cook and give the elderly their medication because we don’t have water to drink. The water from our Jojo tanks is only used to flush toilets because is not clean.”

“This is unhygienic, because our people use nappies. The linen is also piling up. Our centre has no funds to buy water.”

GroundUp approached South African Municipal Workers Union (SAMWU) for comment, which will be added once it is received.

The workers will meet with the municipality on Wednesday.