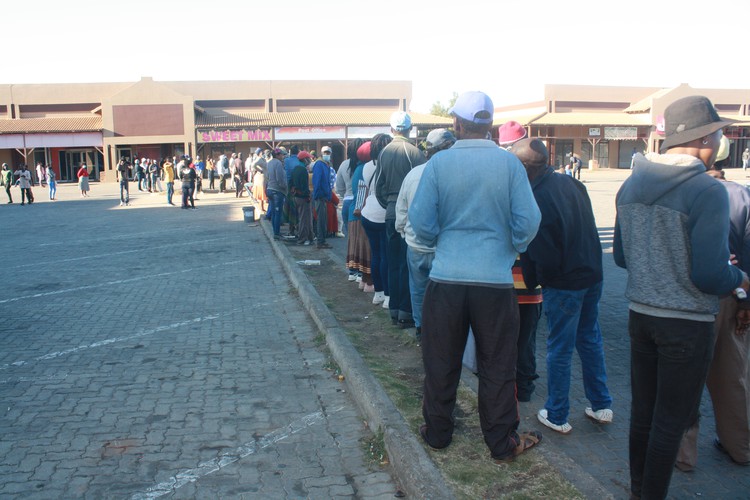 Hundreds of R350 Covid-19 grant applicants wait in line for hours outside the Post Office only to be told to return next week. Photo: Thamsanqa Mbovane

Scores of unemployed people waited in line for over five hours outside the Post Offices in Kariega, Eastern Cape on Tuesday.

Those in line said that though their applications for the Social Relief of Distress grant of R350 had been approved, they were often turned away without getting their money.

The grant was stopped at the end of April, but many people whose applications were approved before the termination are still desperately waiting for their payout.

“We are told to come back again the following week or so,” said Siyabonga Nojoko, who was queueing outside KwaNobuhle Post Office.

Nojoko said he had been to the Post Office more than six times since 2020. “I chose to be paid through E-wallet but suddenly I received an SMS saying that my grant application had been approved and that I must visit the nearest Post Office.

“We have to queue for over five hours here only to be told to come back the following week, either because the computers are offline or there isn’t enough money to pay all of us,” he said.

Nojoko complained that post office tellers were only serving between 50 and 100 people a day.

Another applicant, Sanelisiwe Jasop, said people regularly slept outside the KwaNobuhle mall’s gates in a bid to be first in the line to be helped the next day. “When we arrived, you could see people’s eyes were drowsy. They wake up from a cold cement floor outside the mall to queue with us,” she said.

Jasop said she paid someone R50 to secure her place in the queue the day before. “He deducts it from the R350 we receive. The government speaks nicely about rendering services but when it comes to implementation, it fails dismally,” she said.

On Wednesday morning, over 300 people were already in line by midday outside the Post Office in the Kariega centre. An applicant who identified himself as Jansen, said he arrived from Lapland with his dog in the early hours.

“This is the most painful journey I had to go through. Our government has run out of ideas, because spending more than 8 hours without any guarantees that you will get your money is a disgrace,” he said.

In a statement this week, the Black Sash noted SASSA’s acknowledgement that there were payments delays for the grant. SASSA is still waiting for approval to use funds from the previous financial year to pay the outstanding Covid-19 grants.

The advocacy group said that besides the time lag for approval, when outstanding payments are eventually made, it may be ‘split over days and weeks’ and is unlikely to be paid in a lump sum. “Not only was this grant terminated on 30 April 2021, but now back payments have been temporarily suspended with dire consequences for beneficiaries,” it said.

“For about 6.9 million people, the meagre R350 Covid-19 SRD grant was the only means to put some food on the table. The grant’s termination as well as the suspension of outstanding payments, aggravates the current humanitarian crisis. The Black Sash urges government departments and agencies to work together to ensure prompt payment to beneficiaries.”

Eastern Cape SASSA spokesperson Luzuko Qina said that with the looming third wave of Covid-19 infections, congestion at the branches have to be minimised as much as possible. “Payments of R350 are assessed on a monthly basis to ensure that there are no duplication or to ascertain that the status of the client has not changed. All amounts due to beneficiaries are paid where necessary including backpayments,” he said.

He said all beneficiaries whose applications or appeals were approved and had still not received their money, will get an SMS to come collect their money on respective dates. “We will continue to pay until the very last beneficiary is paid,” he said.