Slain Durban activist knew she was in danger

Nokuthula Mabaso was killed in front of her children 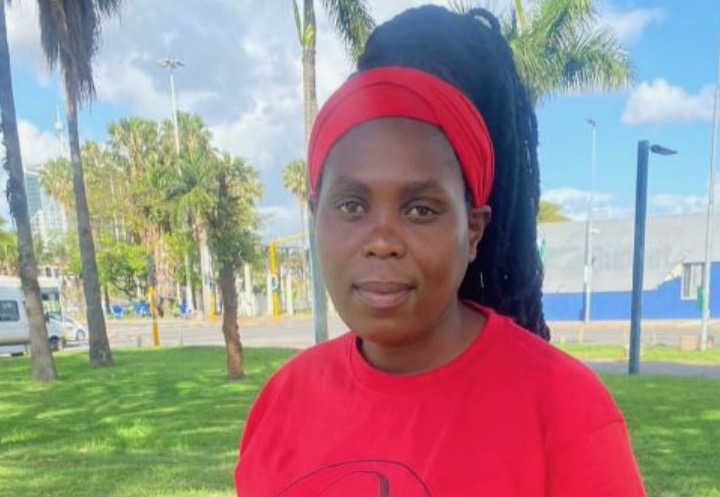 Nokuthula Mabaso was shot dead last week in front of her children at her home in the informal settlement of eKhenana where she was an activist. Photo: supplied

Activist Nokuthula Mabaso, shot and killed last week outside her home in eKhenana informal settlement in Durban, knew the risks of the life she had chosen.

“We chose this life. We are aware of the consequences. Even if we are jailed or die, we know it is for the struggle for land and freedom from oppression for the people of eKhenana,” Mabaso told GroundUp after the murder of activist Ayanda Ngila in March this year.

Mabaso was killed in the presence of her children in the informal settlement in Cator Manor, Durban.

Residents said they heard gunshots at about 7pm on Thursday and when they went to investigate they found Mabaso on her knees and struggling to breathe. “We had a meeting at the communal hall in the afternoon and she said she had to leave early to check on the rice as she was cooking. While the meeting was going on, we heard gunshots but we didn’t know where they were coming from,” said close friend Phumelele Shezi.

“One of the residents rushed to her as she was struggling to breathe and caught her as she was falling on the floor. She died in her arms,” said Shezi.

Mabaso was one of the witnesses to the murder of Ayanda Ngila who was killed on 8 March this year.

The 40-year-old mother was a leader in the eKhenana commune and played a major role in the establishment and management of a chicken farm set up by a group of women.

Resident Sabelo Simelane complained that police were slow to investigate matters relating to eKhenana commune. He said their deputy president Mqapheli Bonono had to go to the police station to report the shooting of Mabaso as the police did not come when they were called by the residents.

“Police were called but they did not come despite being a few metres away from the scene. It is not like we haven’t complained about the police before. We have, so many times, but nobody cares. How many incidents have happened in eKhenana and they are not being investigated? Instead people are being arrested on bogus charges and now they are being killed,” said Simelane.

“How can you kill a woman like that, a mother with her children around, that is another level of cruelty,” Simelane said.

In a statement, Abahlali BaseMjondolo have described Mabaso as a “soldier” in the movement who ensured that more than a hundred families had land and a roof over their heads.

“Mabaso was one of a number of people who witnessed the murder of Ayanda Ngila, and could potentially have been a witness if the matter went to trial. She was also the main respondent to the eviction case that was brought by the municipality in eKhenana. She played a key role in fighting for the occupation, and in turning the occupation into a commune. She was brave in collecting all the information on the various cases that would have led to the arrest of many people who have been behind the destruction of eKhenana,” said Abahlali in a statement.

“We have now lost 23 comrades to assassination, police murders and killings by the land invasion unit and municipal security since 2009. We have lost three activists in the last two months.

“The ANC, the police, the municipality, the prosecuting authority and the magistrates who keep sending innocent people to jail … all need to be held to account for their role in the long, violent and criminal attack on eKhenana.

“We note that the Minister of Police has ignored all our attempts to have him intervene. We note that the Human Rights Commission has not acted despite the fact that they have a report on this matter. We note that the national leadership of the prosecuting authority have not dealt with the crisis in Durban despite communication from us, and protests at their offices.”

“The Cato Manor police station is around 500 metres away from where Mabaso was assassinated. The police confirmed that they heard gunshots but it took two hours for them to arrive at the scene. In fact the leadership had to drive to the police station to call them when calls were ignored. However, when Mqapheli Bonono was rushing to the scene police could stop him, harass him, delay him and fine him for a damaged light on the car he was using. They refused his request for them to accompany him to eKhenana,” the movement said.

KwaZulu-Natal police spokesperson Lieutenant Colonel Nqobile Gwala said that on 5 May 2022 at 9:06pm, police received a complaint of shooting which took place on Ashwell Road, in eKhenana informal settlement in Cato Manor.

“On arrival at the scene, they noticed a body of a 40-year-old female lying on the floor with gunshot wounds on her upper body. It is alleged that the suspects took the deceased’s cellphone before fleeing the scene. Charges of murder and robbery were opened at the Cato Manor police station for investigation,” Gwala said.

GroundUp had not received responses to questions from the South African Human Rights Commission and the National Prosecuting Authority at the time of publication.