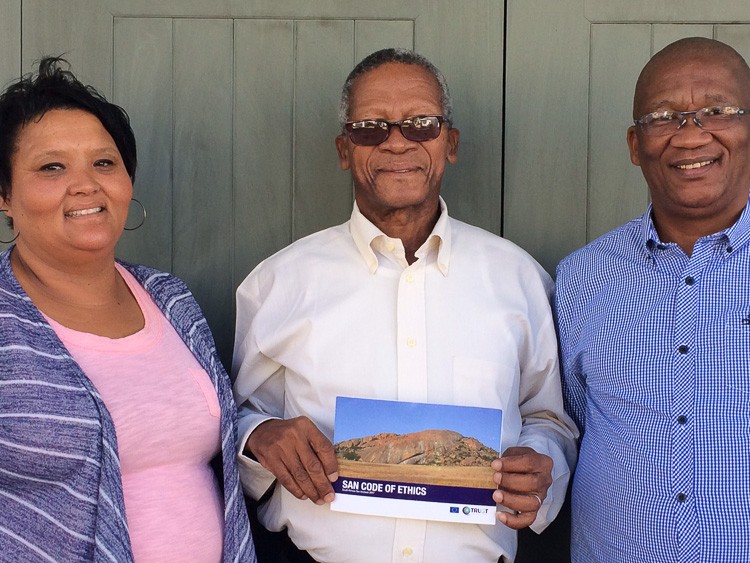 Members of the San Council: Leana Snyders, Mario Mahongo and Collin Louw at the launch of the Code of Ethics for researchers. Photo: Melanie Gosling

The South African San Council has launched a code of ethics to guide researchers to stop intrusive and sometimes exploitative research in San communities.

The council said that after more than a century of being questioned, photographed, measured and “sampled” by researchers from around the world, and having San indigenous knowledge pilfered for commercial gain, it was time to say, “Enough.”

While the council is not saying there must be an end to research, it is saying that it must be on their terms.

The code of ethics was launched in Cape Town on Thursday 2 March during a conference of TRUST, an international network set up in 2015 to ensure that researchers stick to high ethical standards. TRUST is funded by the European Union’s Horizon 2020 Programme.

The council said before researchers could work among the San, they must agree to embrace the four pillars of the code: respect, honesty, justice and fairness, and care.

The code is also designed to ensure the sharing of any benefits from researchers using San traditional knowledge for commercial developments in the pharmaceutical industry, in cosmetics and in food and beverages.

Leana Snyders, director of the San Council, said at the conference there had been “an influx” of researchers in the Kalahari in recent years.

“They don’t all respect personal boundaries. They don’t think they need to respect us. So we said: ‘Look, we must get this thing under control.’ One of our respected leaders Andries Steenkamp said: ‘Researchers must not come in through the window. Only skelms (bad people) come into your house through the window. They must knock on the front door and wait to be let in.’ That’s what this code is about. It’s for us to decide to open the door. It’s to stop exploitation,” Snyders said.

The code was drawn up by three South African San groups: the Khomani, the !Xun and the Khwe.

Roger Chennells, a Cape Town lawyer who has represented the Kalahari San since the 1990s, and helped develop the code, said it was about creating equitable research partnerships.

The code also focuses on the sharing of skills between researchers and San communities, and the transfer of the results of the research in an accessible form.

Mario Mahongo, acting chair of the South African San Council, said San communities hoped researchers all over the world would respect what they were doing and adhere to the code.

“We are not standing with hands cupped, begging from the research community, but we are saying our young people also need to learn, so they must benefit. For instance, use them as translators,” Mahongo said.

In a short movie shown at the conference, San community member Jan van der Westhuizen spoke about how foreign researchers had gleaned information about medicinal plants from his forefathers. This, he said, had been used to manufacture medicines used by people all over the world.

“Yet my forefathers died in poverty. And so it goes on.”

Snyders said researchers would have to apply to work with San communities through the council and follow a process and protocols to ensure the interests of both the researchers and the San were met.

“In future, we hope to have a review panel made up of members of the San community and experts to vet research proposals, “ Snyders said.

Hennie Swart, director of the SA San Institute, said they would also like to see research conducted that they themselves had asked for.