By Nombulelo Damba-Hendrik and Mary-Anne Gontsana 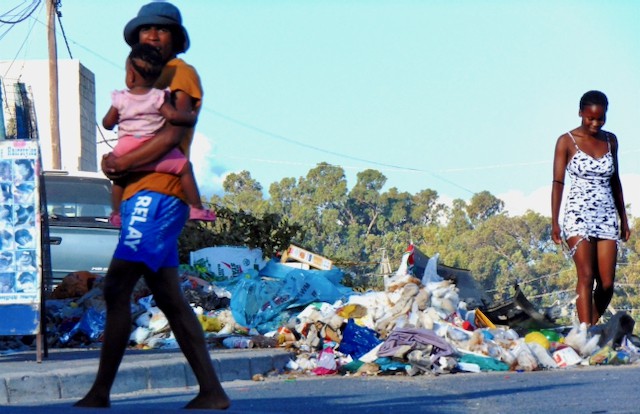 Protests over rubbish piling up, sometimes for weeks, in Cape Town’s townships, are a regular occurrence. Garbage was left uncollected in all three sections of Marikana informal settlement in Philippi from late December until February. In Mfuleni, rubbish piled up for two months. The Burundi section has still not been properly cleaned.

Besides the stench and the flies, maggots and rats, the piles of garbage also block roads and thoroughfares in the crowded settlements and pose a risk to children.

The failure to collect rubbish often arises from disputes between the residents, those with and those without jobs, the community leadership and City officials. The contractors sometimes get roped in too.

Nosiphelele Msesiwe of the Social Justice Coalition (SJC) says disputes over the processes of recruitment on the Expanded Public Works Programme (EPWP) erupt from time to time in Khayelitsha. ​​EPWP workers are chosen from the City’s jobseeker database.

Msesiwe said in Enkanini informal settlement rubbish was left uncollected and the area uncleaned in January when workers downed tools for days because “the community was complaining that the same person had been a supervisor for the last five years”.

They wanted other people “to be given a chance to occupy that role”.

“Sometimes you will find that there are issues with political affiliations where people will get jobs because they are affiliated to some political party or organisation,” said Msesiwe.

In the Marikana case, Mayco Member for Urban Waste Management Grant Twigg said, “The City appointed a contractor who was ready to take over on 1 January but the community rejected the workers who were randomly selected from the jobseeker’s database … Disputes around the selection of workers continue to undermine service provision.”

Marikana community leader Mongezi Sibhidla said, “Everybody knows that when a project will take place in the community, you approach the leadership first so we can make sure that the whole community is included and up to date with what is happening in their area.”

“Firstly, the contractor was never introduced to us. Secondly, we were told that 67 people were meant to be employed for the project, but the number was less. And then down the line we started receiving complaints from some workers saying there were wage shortages,” said Sibhidla.

Asked about the City’s database and how workers are chosen, Twigg said, “The City sources names on its database for a specific community, and randomly selects candidates from this pool to guard against nepotism.”

“If there are not sufficient community members on the EPWP database, a registration drive must be done,” said Twigg.

He said someone could receive more than one work opportunity from the City over time, but never consecutively.

As for contractors, they are chosen by competitive bidding through the City Supply Chain Management process, he said.

Twigg said EPWP opportunities “are randomly distributed, normally to members of the community in which the project will run”. He said the City guards against nepotism and corruption. 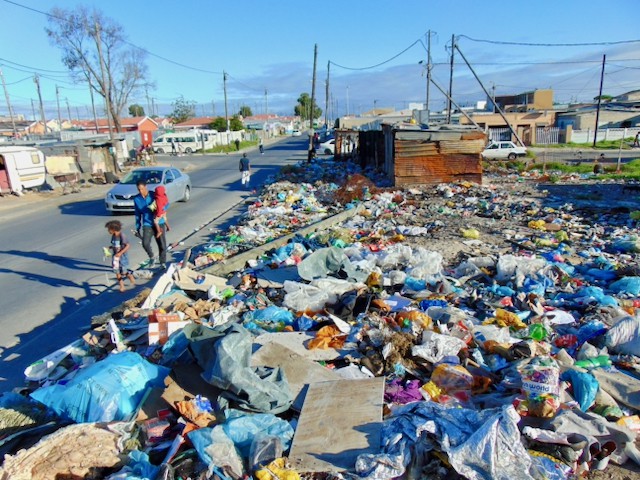 Rubbish piles up around Mfuleni in February.

In the case of Mfuleni, residents accused community leaders and Ward 114 Councillor Ernest Madikane (ANC) of trying to manipulate the recruitment process.

“When our ward councillor [Madikane] was looking for votes he promised people jobs. I guess he is trying by all means to keep that promise,” said Burundi area community leader Ayanda Mteto.

The community turned to City of Cape Town Speaker Felicity Purchase for help. She said the matter was being investigated but she was “not in a position to disclose any further details on the matter, at this time”.

Madikane denied allegations of fiddling with the City recruitment process.

“I do not mix development with politics. My problem is a database recruitment that always selects the same people for projects,” he said. Madikane said the City was “working on solving the problem”.

Twigg said new recruits were supposed to start on 1 January, but the workers sourced from the jobseekers’ database were rejected by the community leaders because they resided in the wider sub-council area.

“There was no service from 1 January until a new recruitment process was completed on the 17 February,” he said.

Mfuleni residents say that before the City introduced its database system, whenever there was a new project with jobs, a general meeting would be called and people seeking work would put their names in a box. The names would then be randomly drawn and everyone could witness the process.

According to Mteto, what happens now is that City officials call the community leaders to verify if the people selected on the database are indeed from the area. Once this verification is done, people are hired.

To get on the City database, residents submit jobseeker forms at the ward councillor’s office.

Former Mfuleni community leader Nontuthuzelo Ndiniso said it was her duty to submit the jobseekers’ forms late last year at the City offices in Kuilsriver for the 2022 recruitment opportunities.

Out of the over 105 people’s forms she submitted “not a single person was hired” said Ndiniso.

“Last year we had a project of people cutting the bush. The rate was R120 a day. Those people only worked for three weeks, then the project stopped. Now, are you telling me that those people must not be hired for the next five years because they once benefited for three weeks?” she said.

According to residents, Mfuleni has several projects, including the cleaning of mobile toilets, street cleaning, emptying dumpsters, construction of a road in Bardale, and the cleaning of a canal.

Nondleko Makeleni lives with her five children and four grandchildren. The household relies on child support grants and she is desperate for other income. She said that every year for more than 15 years she had submitted a jobseeker form. She finally got lucky in 2021, to clear bush and trees for three weeks. She was told that she was not hired again in 2022 because she had benefited already. She started crying when she told GroundUp this.

Lindiswa Masiko also says she was passed over for the same reason. 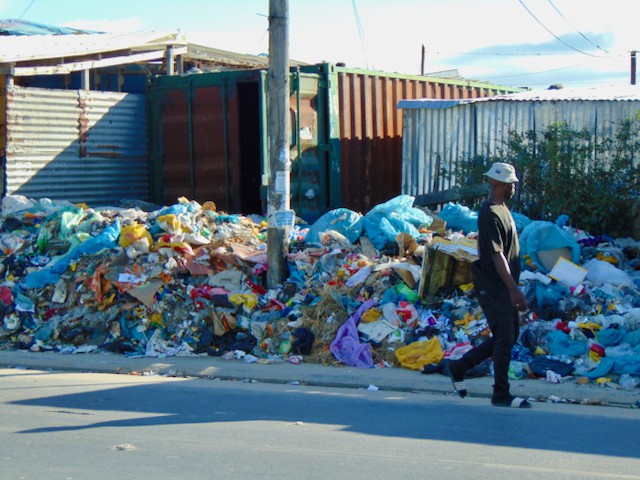 Piles of garbage blocked the pavements in Mfuleni for weeks.

According to Twigg, there is tension between City policy on EPWP recruitment and residents and community leaders who wish to influence the process to favour some.

He said some community leaders, particularly in communities formed during land occupations during the Covid lockdown, have sought to ring-fence work opportunities, sometimes stopping work completely and threatening violence if “outsiders” are employed.

Twigg said in some cases the City had no choice but to compromise if it was to resume services. In such cases the recruitment process had to be done again, which he said did “take time and can result in gaps in service provision”.

“The City is making efforts to upgrade the jobseekers’ database with the residential addresses of candidates, to reduce the potential that EPWP workers are rejected by the community they are assigned to work in,” he said.

“The City also intends embarking on EPWP registration drives, especially in recent land invasions, to ensure as far as possible that lack of registered candidates in an area does not cause delays,” said Twigg.