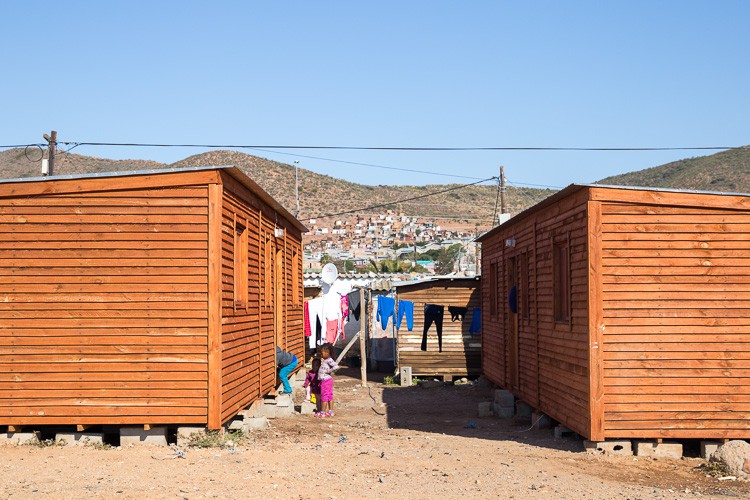 Wendy houses in Nkqubela, Robertson, where some farm workers say they have been dumped. Photo: Ashraf Hendricks

By Thembela Ntongana and Ashleigh Furlong

“It’s the farmers’ dumping ground,” said Shirley Davids of the Rural Legal Advice Centre. She was referring to a number of wendy houses on open land and in backyards in Nkqubela township, just outside Robertson. She says farm workers are dumped here after they have been evicted from farms in the area.

A wendy house in exchange for a lifetime of service

In 2015, Lodewyk was having leg problems. He had turned 60, and he asked Gerrit van Deventer, the owner of St Kilda Kwekery, Lodewyk’s employer, if he could retire.

“He wanted me to retire when I was 65. But I refused. I said to him the state says that you can work till 60,” said Lodewyk. He stopped work later that year because he was struggling physically.

He said that one morning in January 2016, he was sleeping in his house on the farm when he was woken by other workers. His belongings were loaded onto a truck and he was “dropped off” in the backyard of the sister of local proportional representation councillor Sfiso Malgas’ (DA) in Nkqubela.

When contacted, Malgas said, “Many people rent out their backyards, what is different about this one?” He also said that Lodewyk is his “grandfather”. When GroundUp pushed Malgas on this claim, he said that Lodewyk had raised him on the farm that he grew up on. He also said GroundUp had no right to enter his sister’s plot to speak to Lodewyk.

For his 32 years’ service, Lodewyk says he was given a one-roomed wendy house. He says nothing was explained to him and he did not agree to the move. “[Van Deventer] said that he can’t keep old people on the farm,” said Lodewyk. “The house he evicted me from still stands open.”

Asked for comment, St Kilda Kwekery said it needed to consult its labour lawyer, but the lawyer will only return from leave on 23 July.

Lodewyk’s partner of about 35 years, Maria Fransiena Gentle, also worked and lived on the farm. She retired a few years before him. At 67, Gentle is frail and bedridden, and she uses a wheelchair. The wendy house is not suitable and it is also raised off the ground on concrete blocks making access difficult for her.

​Lodewyk cares for Gentle. “I don’t mind washing her. I do everything. What she asks, I do,” said Lodewyk, who is himself quite frail.

They both receive old age grants, but it is not enough says Lodewyk. They don’t pay rent but for electricity and water, which they receive from the house on the property, they say they pay R500 a month.

According to the Extension of Security of Tenure Act (ESTA), an occupier’s right to residence may not be terminated if the occupier has resided on land for ten years or more and has reached the age of 60. Nor may it be terminated if an employee or former employee is unable to work due to ill health, injury or disability. It would appear that Lodewyk meets the criteria to claim this right, but St Kilda Kwekery would not verify his story.

“I was born on that farm”

Samuel Windvogel lives with his wife and four children in a one-roomed Wendy house next to the railway line in Nkqubela.

Windvogel said that he was dismissed after working for 27 years on La Colline Plaas owned by Lieb Swiegers. He said he was fired with a number of other workers after they attended a union meeting. He claimed “the farmer” said he was going to get rid of workers involved with the union.

“I was born on that farm,” said Windvogel.

Lieb Swiegers said Windvogel was dismissed in 2012 for absenteeism. He said that Windvogel had worked on the farm since 1994.

After he was dismissed, Windvogel lived on the farm for a couple more years. Then, he said, a group of men from the farm management came to his house and threatened him. “They dropped me here [Nkqubela],” he said.

Swiegers denies that Windvogel was kicked off the farm. He said Windvogel decided to move out of his house because “according to him, moving out was better for him.” He said Windvogel chose where he wanted to go. Swiegers said there is also a retirement fund for workers, and the employer contributed 50%.

Windvogel does part time work to support his four children and his wife. Two of his children are school-going age and receive SASSA grants. His wife is unemployed.

When Windvogel lived on the farm he stayed in a brick house with a toilet inside. In Nkqubela, his family have to use the bushes across a railway line as a toilet.

“He [Swiegers] said to me that I signed a letter [agreeing to move], but I didn’t sign a letter … The most important thing is that I want them to give me money for a house … After working there for as long as I did, I cannot live in something like this,” said Windvogel.

The family now does without electricity, and Windvogel walks to fetch water.

Malgas denied being involved in the relocation of Windvogel and Lodewyl.

“People need a place to stay,” said Malgas. “If you come to me and ask for a place, I will give you and that is what happened here. That is how informal settlements are formed.”

Malgas wanted to know how we got his cellphone number. We told him he was a councillor and his cell phone number was publicly listed.

“I will not go door to door to ask people how they ended up here,” said Malgas.

“These people had an agreement with their farmers to move here and I was not involved. You cannot blame my farmers. They did nothing wrong,” he said. “If you fire someone, you cannot keep them in your house. I know I would not. They had to move somewhere,” said Malgas.

Malgas threatened to report GroundUp to the police. He wanted to know how we got his cellphone number. We told him he was a councillor and his cell phone number was publicly listed. He threatened to interdict us.

Ward Councillor Andile Shibili (ANC) and PR councillor Sthembele Mbi (ANC) both say they have reported the matter of people living in the area near the railway tracks to the council. Shibili alleges that these are all people evicted from surrounding farms and moved with an agreement between Malgas and the farmers.

“The place is not for people to live – it has no electricity and no sanitation and people are there illegally renting from Malgas,” said Shibili.

Mbi said no investigation has been done even though he sent a motion to the council in January this year.

Farm workers left out in the cold

Pension or provident funds are not compulsory for farm workers. In many cases, if they retire, get dismissed or change jobs, they are left with nothing.

In a 2015 report on farm workers’ living and working conditions, it was found that in the third quarter of 2014, only one in five received a contribution to a pension or a retirement fund from their employer.

Security of tenure is often precarious. In the report, the authors state that the most common ground for farm workers losing their residence was that their employment ended.

The owner has to give the occupier two months’ notice. The municipality and the local office of the Department of Land Affairs must be given a copy. But, says the report, “Undoubtedly these steps provide a degree of protection to workers, in that eviction is neither a quick or inexpensive process. On the other hand, the complexity of the process also works against the farm worker, who is invariably unable to match the legal and other resources the farmer is able to deploy.”