Despite lots of formal rules and lip-service, the state provides little help 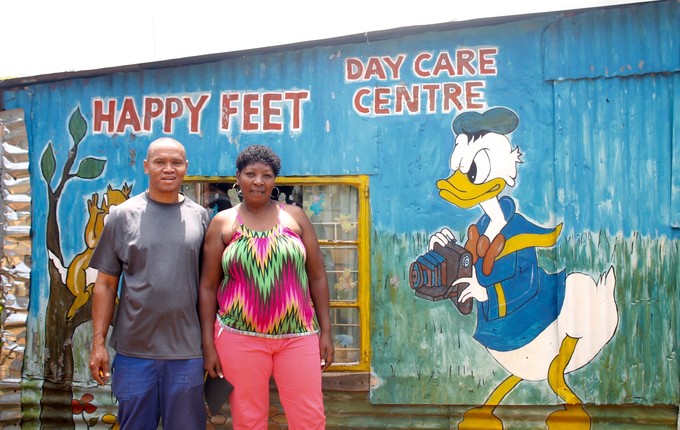 Ernest and Eadith Segelberg outside of their Happy Feet Day Care Centre in Bushkoppies Informal Settlement.

Eadith and Ernest Segelberg have worked for eight years to create a safe haven and place of learning for the children of the Bushkoppies informal settlement, south of Johannesburg. The husband and wife team run Happy Feet Day Care out of a shack behind their home, where they care for up to 60 children at a time. The children, ranging from nine months to six years of age, are fed, entertained and taught to read and write. The Segelbergs do all this without electricity, with little formal training, and without recognition or help from the government.

Eadith started the centre in 2008 after losing her job as a factory supervisor. “I was just sitting here, looking at the kids going up and down the street and playing at the dumping site,” she said, “so I started gathering kids together.”

By opening a day care, she was responding to a common need in South Africa, where approximately four million children under the age of six live in poverty. Only a quarter of poor children aged three to five have access to an early learning programme.

Happy Feet Day Care is just one of thousands of informal early-childhood development (ECD) centres in South Africa that fill this gap, providing care and education to some of the nearly two million children living in informal dwellings. The Gauteng Department of Social Development has identified at least 1,600 unregistered crèches in operation in Gauteng and there are an estimated 2,000 in the Western Cape.

The Segelbergs have cared for over 300 children in their eight years as principles of Happy Feet. They built the crèche with corrugated tin and scrap wood, and lovingly decorated the inside with alphabet posters, stickers, and photos of graduates in cap and gown. The crèche has running water, but no electricity. “There are a lot of advantages to teaching children when you have electricity, but we do not have it,” said Eadith. The city does not run power to Bushkoppies, so most residents jury-rig their homes with illegal connections from power lines. But the Segelbergs refuse to wire an illegal connection to their crèche, both out of a concern for safety and to teach the children a respect for the law.

The Segelbergs refuse to wire an illegal connection to their crèche, both out of a concern for safety and to teach the children a respect for the law.

While the Segelbergs pride themselves on the quality of education they provide, not all ECDs are equal. Just around the corner from Happy Feet is the Zesuliwe Day Care, where 16 small children cram into one small, stifling room. There are few toys or educational materials here to entertain the children, and just one teacher to look after them all.

This is a common scene in informal crèches. Across the country, 90% of 5- to 6-year-olds and 55% of 3- to 4-year-olds attend some form of educational institution or care facility, but there is a wide inequality of care and education provided.

Much needed resources and training come from becoming a registered ECD with the Department of Social Development (DSD), but many informal crèches find they are woefully under-qualified to meet the registration requirements.

To register and qualify for DSD funding, a crèche must have, among other things, posted exit signs and escape routes, approved building plans, one toilet for every 20 children and half of a square metre of play space per toddler.

The regulations are in place to protect the children. According to a report by the Housing Development Agency, “many children attending informal ECD centres face significant health and safety threats. The challenges include poor infrastructure and facilities, poor socio-emotional and learning environments and poor nutrition.”

There are periodical stories in the news of deaths and abuse at informal crèches. Yet, of the thousands of operating informal crèches in Gauteng, the Gauteng DSD received only six complaints about non-registered day-care centres in 2014. “There hasn’t been an overwhelming number of complaints,” the former department spokesman Sello Mokoena was quoted as saying.

It costs R200 per month to attend Happy Feet, and other informal care centres reported similar fees. Less than R10 a day covers two home-cooked meals and a snack, the salaries of two teachers, and a full day of care and learning. There is little left over for the owners to make a living, let alone improve their centre. Meeting the regulations is not feasible for these crèches without government aid, but they cannot qualify for aid without registration.

After attempting to register with the government, inspectors came to the Happy Feet Day Care and threatened to shut it down for not meeting regulations. The Segelbergs worked to comply – they expanded the building and changed doors to meet safety code. But the inspector never came back. “There are a lot of rules but no help whatsoever,” said Ernest.

Gloria recently opened a new crèche in Thembalihle. She hopes to qualify for government aid.

Before they can meet regulations informal crèche owners struggle to meet the basic needs of their children under their care. They need electricity, plumbing, toys, books, nutritious foods and mats for the children to sleep on.

Many of them wish for more training to become better educators. Grace, a teacher at Ntirhisano Childhood Daycare and Preschool in Thembalihle settlement, recently received teacher training from SmartStart, a social franchise for early learning that aims to expand access to quality early childhood development. Grace was given a kit with lessons and activities for the children, and she said her job has since gotten easier. “It’s a very important job,” she said, “but we have no money.”

Other organisations have also stepped up to help meet the needs of informal crèches. JAM provides nutritious meals to children in day care centres. The non-profit Knit-A-Square delivers hand-sewn blankets, hats, and gloves to children. They work especially with those crèches that do not qualify for other assistance.

“They are raising South Africa, and they do it with so little.”

Ronda Lowrie, co-founder of Knit-a-Square, believes that informal crèches are sorely under-recognised and under-resourced. She says of the teachers who run them, “They are the backbone of this country. They are raising South Africa, and they do it with so little.”

The DSD and the South African government recognise the critical importance of ECD. ECD is high on the national development agenda and was written into the National Development Plan, but the owners of informal crèches see little evidence of it. The report by the Housing Development Agency concluded that, “there continues to be a preoccupation with formal standards and modes of response and insufficient willingness to recognise and work incrementally with informal ECD.”

The Segelbergs intend to continue to apply for government recognition and assistance. “It is very tough,” said Ernest, but Eadith added, “It’s about what’s best for the children.”

Some surnames have been withheld.
All photos by Cecilia Johnson.