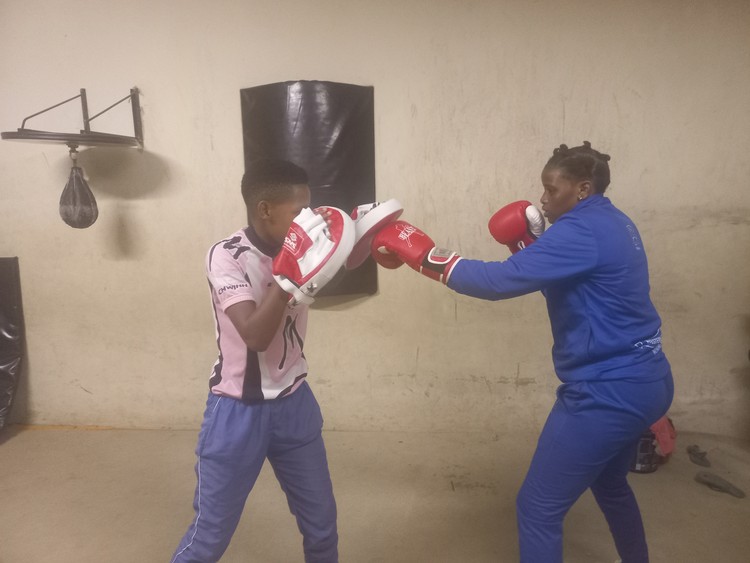 Since entering the ring as a middleweight boxer in 2019, Knysna matriculant Anathi Mbalo has only lost a match twice.

Mbalo, who boxes with the Masipakame Boxing Academy, is believed to be one of the first two female boxers from the Garden Route town to win top spots at this year’s national championships. On 31 January, Mbalo won the middle-weight division of the national boxing championship held in Durban.

Mbalo, 18, said she initially joined the gym three years ago to lose weight. “When I saw how other female boxers were so passionate about the sport I also wanted to be part of it,” she said. Mbalo said she hopes to become a role model for children in her neighbourhood. She lives with her parents in Concordia and plans on pursuing a career in boxing after school.

Mbalo said one of the biggest challenges is getting funds to travel to competitions, because she and others in the club can’t afford to compete without donations. “This pushes me to work even harder so that I do not disappoint my home town,” she said.

Another boxer, 17-year-old Athenkosi Bhiyana, said she has her goals set on becoming a professional boxer and hopes to to one day represent South Africa abroad. “My self-esteem has grown since I started in the club. I can now confidently say no to peer pressure; that is one of the things I’m grateful for the most,” said Bhiyana.

Coach Madikane, an amateur boxer for over a decade, told GroundUp that they started the boxing gym around 2016 to help get children off the streets. “Children come into the gym even in harsh weather which shows me how dedicated they are. As their coach, I had to make it my responsibility to ensure that they do not give up,” he said.

The gym pays about R200 once a year to the regional boxing board for its affiliation in the hope of entering students into local competitions. He said training is free as most of the students come from very poor homes.

The boxing club is currently housed in a one-room house built by the Knysna Municipality in 2015. It does not have toilets or running water. In August, the gym suffered a blow when thieves broke in and stole training equipment.

A case of theft was opened with police but the gym has been struggling to replace the equipment ever since.

The Knysna Municipality has tried to replace some items, but the club still needs more equipment to cater for 38 children who train there.