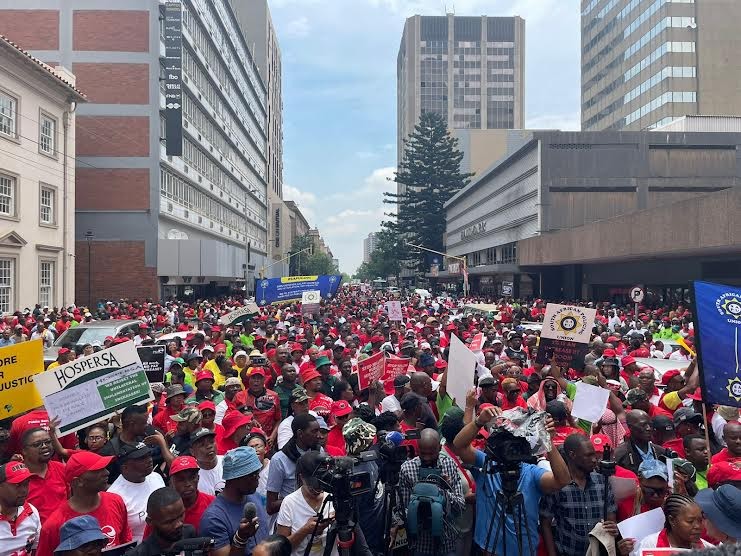 Workers from public sector unions affiliated to three federations marched to the National Treasury in Tshwane on Tuesday demanding that the government revise its 3% wage increase. Photo: Chris Gilili

Hundreds of public sector workers marched to the offices of the National Treasury in Tshwane on Tuesday, rejecting the government’s 3% wage increase and calling on the government to return to the negotiating table.

Unions are demanding a 10% increase. Weeks of negotiations in the Public Service Coordinating Bargaining Council have reached a deadlock.

Nozipho Matsiehe, a nurse from Soshanguve Clinic, said that the government did not appreciate public servants’ work. She said she has worked in the public sector for 20 years.

“We deserve much better than what they are offering. It’s very tough to survive. We want a decent wage increase … Three percent is really nothing when you look at it monthly and considering the rising food prices,” she said. “We are really suffocating. Children are demanding clothes for the festive season. Electricity and food prices are very high.”

Another department of health employee, who has worked at Kwa-Mhlanga Hospital in Mpumalanga for seven years, said workers deserved better.

“The government is disrespecting us. For the past three years we have not received any increases. We worked very hard at the height of the Covid-19 pandemic, under extreme conditions. We are not asking for too much, but for appreciation. I earn less than R18,000 a month, and I am the sole breadwinner for my family. After covering our monthly expenses, I am not left with anything.”

Inflation is currently running at about 7.5%, according to StatsSA, with food prices up nearly 12% in the year to September.

Acting Public Service and Administration Minister Thulas Nxesi came out of the Treasury offices to receive the unions’ memorandum.

In the memorandum, the unions demanded a 10% increase across the board, permanent employment of police reservists, teachers and community health workers, and the filling of vacant posts. They said they would give the government seven days to return with another offer, failing which they would intensify their action from 2 December.

FEDUSA said it appealed to President Cyril Ramaphosa, who is a former unionist, to listen to the workers’ demands. “We are united against an arrogant government. We are not backing down from the 10% demand, ” the federation said.

In some parts of the country clinics and other government offices were closed. 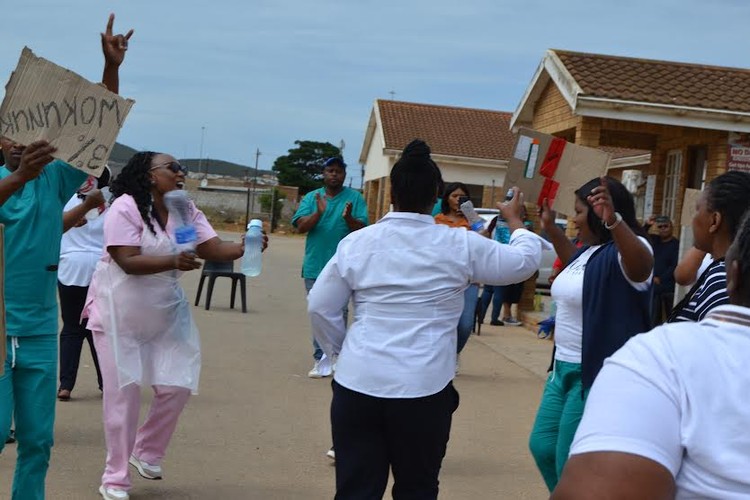 Patients were turned away from Mabandla Clinic in KwaNobuhle, Kariega, in the Eastern Cape, as staff joined the day of action. Locked outside the gates, parent Anenjongo Mabope said she had gone there with her four-year-old daughter and was turned away. “She was vomiting and having stomach pains but we were told to go away from this clinic. It’s even difficult to go to other nearby clinics because all nurses, porters and ambulance drivers are on strike.”

Deputy provincial secretary of the National Union of Public Service and other Workers in the Eastern Cape Mzikazi Nkata said the government should hire more public servants to improve services.

Nkata told GroundUp public servants were facing an “onslaught”. “We will never agree to a three percent insult.”

“Enough is enough,” she said.

In Gqeberha, Motherwell NU8 clinic and the Motherwell Healthcare Centre were both closed. Security guards told patients that the clinics were closed. Patients were told – not by an employee but by a man who usually preaches outside the gate – to go to other clinics.

Vuyo Dlanga of the Democratic Nursing Organisation of South Africa said, “Currently clinics are starting with lunch hour picketing. All shop stewards are joining the central march in Bhisho.”

Department of Home Affairs and the SA Social Security Agency offices were operating as usual in Motherwell.

Eastern Cape Department of Health spokesperson Yonela Dekeda said the “no work no pay” rule would be applied to those who took part in the strike.