Tablets handed over to gogos in Eerste River on Friday as part of the goGOGOgo project. 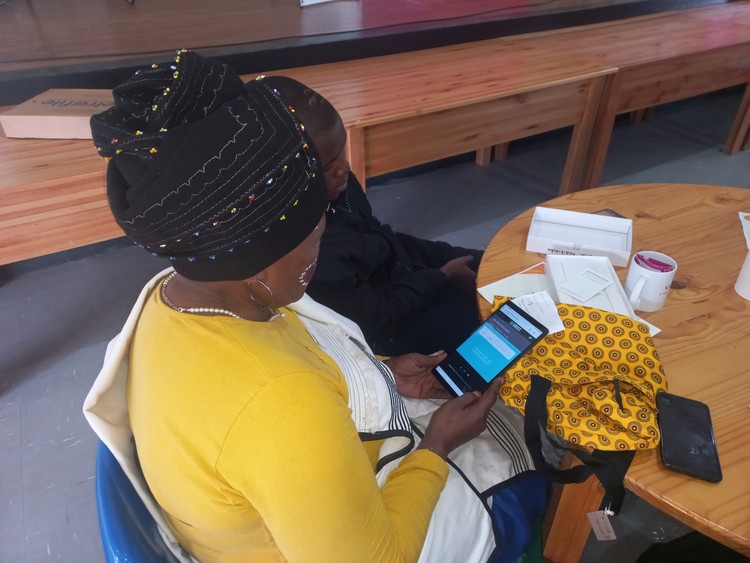 One of the gogos using her new tablet at the goGOGOgo event in Eerste River on Friday. Photo: Siphokazi Mnyobe

“My grandchildren will grow up knowing not to give up on their dreams,” says 66-year-old Olga Mhlontlo from Mfuleni.

Mhlontlo was among 11 grandmothers (gogos) who received tablet computers last week after completing two weeks of training on how to use technology to access digital applications and online government services.

This was part of a project called goGOGOgo, piloted in Alexandra, Johannesburg, which teaches older people in townships to be more tech-savvy. In most cases, the gogos are the sole providers for their families and are raising their grandchildren using their Older Persons Grant. During lessons, they were taught the basics of using the internet, emails and some commonly-used social media apps.

On Friday, the gogos from different townships were dressed in traditional attire. One-by-one they shared their experiences with the project and how they learned to navigate the apps on the tablets. They also received certificates for completing the workshop. “I learned about social media and the benefits of connecting with people. I always thought people were wasting time on Facebook or WhatsApp but now I know you can even advertise your business there. I will also ask my grandchildren to teach me things I do not know, like downloading a bank app,” Mhlontlo said.

Mhlontlo first heard about the project from her two grandchildren who attend Apex High School in Eerste River, where the training was held.

Sheila Moore, a neighborhood watch member, said, “We are trying by all means to ensure that there’s no crime in the community and that children go to school. I’m sure that when children see these gogos graduate, they will be inspired to do more in school.”

Jane Simmonds, founder of goGOGOgo, said the tablets will help the gogos bond better with their families, as well as help their grandchildren who will now be able to do research on the devices too.

“During the pandemic, children were compelled to study online and most gogos were not familiar with technology. We saw this as an opportunity to educate older people about technology so they can adapt and move with time,” she said.

Simmonds said Vumatel sponsored the project. She said they hope to expand the project to other schools in townships.