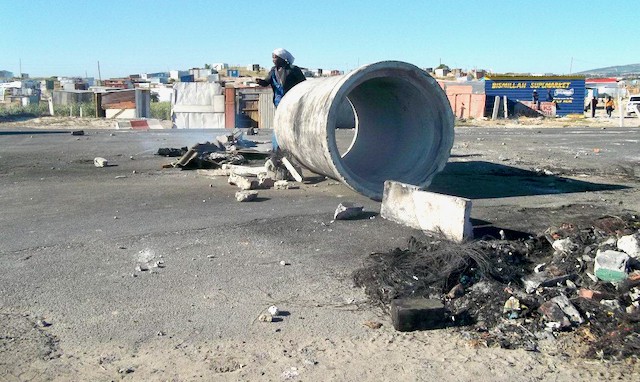 Land occupiers barricaded the corner of Old Faure Road and Mew Way with burning tyres and other objects on Thursday. Photo: Vincent Lali

On Thursday, Cape Town metro police were caught on video tossing a disabled man out of his wheelchair after a verbal altercation with him. The incident happened outside the holding cells at Cape Town police station after a protest at the Civic Centre.

The video shows an officer lifting the wheelchair and causing Zwelenkosi Ngidi to fall on his side on the ground.

Alex Madikane, who was wheeling Ngidi during the incident, said, “I felt disgusted and asked them why they treated an old, disabled man in that way. He is not a criminal.”

“We want the police to also respect us [protesting shack dwellers] because we are not criminals. We are just demanding water, electricity and toilets,” he said.

Thembeni Nikani said he whipped out his cellphone to film the cops after they started to rough up Ngidi.

“I observed one cop grab him by the shoulder as he sat on his wheelchair while another joined him and kicked it and I decided to film them,” he said.

“I felt nauseated as I watched the cops shove him and his wheelchair and thought that we as blacks are not yet free in this country,” he said.

Nikani said the cops have damaged the wheelchair.

Nikani said Ngidi had gone to the police to find out about protest leaders arrested at 7am that morning. “As our spokesperson, he wanted to explain to the cops why we were protesting and find out how he could assist leaders who were arrested,” he said.

On Friday, community leader Mawande Jama said he and Ngidi went to Cape Town police station to collect his cellphone and case number.

Ngidi told GroundUp: “I’m in no condition to speak.” He handed the phone to Jama.

Jama said: “The police brutality has left him emotionally wounded and distraught. The video footage of the incident is being watched by the whole world … Ngidi’s body aches, especially his legs. He is too stressed out to describe how the incident happened. The whole violent episode is too painful for him.”

“If the City cared about Ngidi, it would have contacted him to get his side of the story before suspending the officials,” said Jama.

In a statement on Friday, the City of Cape Town’s Safety and Security Portfolio Committee, said it echoes sentiments already expressed by Mayor Dan Plato and does “not condone the behaviour of the officers in the video, regardless of what the context might have been”.

The two officers involved are suspended while a “full investigation takes place”.

Nkosinathi Swartbooi, Head of Advocacy and Campaigns for Social Justice Coalition, said, “Today’s incident is not isolated. One can only shudder at the amount of times this violence was not captured on camera.”

The incident “shows we are dealing with a law enforcement that relishes an opportunity of belittling the poor and vulnerable,” he said.

Andile Qhancu said he and other land occupiers had blocked all entrances into the Civic Centre and demanded that Mayor Dan Plato address them.

“We have been handing memorandums of our demands to various City officials and giving them seven days to respond each time, but we have not yet received any response,” he said.

Qhancu said, “We didn’t burn tyres or stone cars. We were blocking the entrances just to attract Dan Plato’s attention.”

The land occupiers had on Friday held a virtual meeting with senior City officials at Khayelitsha Training Centre to discuss their demands, but the meeting collapsed, said community leader Mabhelandile Twani.

“We walked out of the facility after the officials told us they were not mandated to take decisions about provision of basic services. We wanted to meet officials who could decide whether or not to give us basic services,” he said.

The City of Cape Town media office said: “There was no constructive outcome from a virtual meeting held between the City and representatives from this group on Friday, 13 November 2020, as the representatives logged off in protest about 45 minutes into the meeting.”

“In its assessments of the areas, the City’s stance is that the land assessment/physical conditions determines what, if any services, can be provided in terms of emergency relief. Such assessments will happen,” it said.

Land occupiers who did not join the Civic Centre protest barricaded the corner of Old Faure Road and Mew Way with burning tyres and other objects on Thursday.

The protesters said police entered nearby Covid Village informal settlement. “While we protested for service delivery, the police fired rubber bullets at us and our shacks and broke many windows. We even found rubber bullets inside our shacks,” said protester Aphelele Mdunge.Western Cape police spokesperson FC van Wyk said: “This office can confirm that at about 2am this morning [Thursday] protesters took the streets and blocked the N2 and Mew Way drive in both directions.”