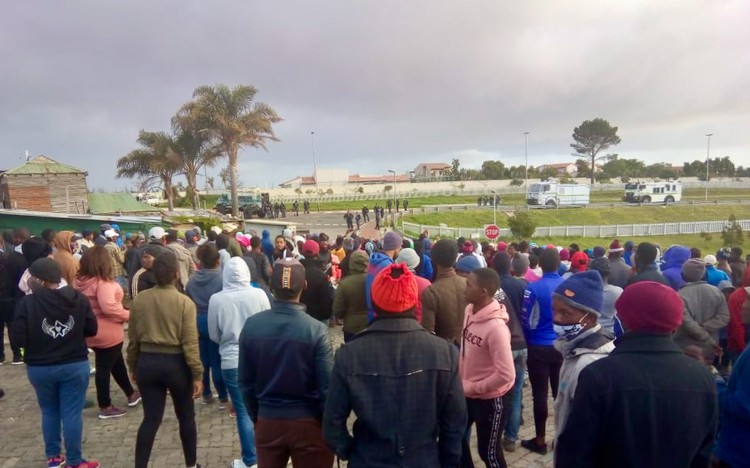 For weeks the community of Qolweni informal settlement in Plettenberg Bay have protested on the N2 over a delayed RDP housing project. Photo: Siphokazi Mnyobe

It was another week of protests over a lack of RDP housing for Qolweni informal settlement, Plettenberg Bay, with police using rubber bullets and stun grenades and residents blocking the N2.

Simmers will meet the community on Thursday. The community has agreed to stop protesting if the municipality guarantees that a construction company starts work on the site by 3 November.

Resident Xolani Bangela said, “This is the fifth time now a municipal official is saying we should wait for 21 days in order to know all the information we need about the construction company. We have been waiting since last year.”

“We find out [now] that the housing department needs to approve additional money for the project to commence,“ said Bangela.

According to Andile Namntu of Bitou Municipality, the budget is R25 million for the 169 houses.

“The TRA [temporary relocation area] is ready for occupation and the plan is to move people from the Rasta Area in Qolweni into the TRA within the 21 days of the window for appeals. This will eliminate more delays to the completion of the development,” the municipality said in a press release on 9 October.

Community leader Nolubabalo Ndamane said, “This is way more than not getting RDP houses on time. It is also motivated by years of being disappointed by the government, and our children are at the forefront protesting with us. We can’t even protect them from police brutality.”

Southern Cape Police spokesperson sergeant Christopher Spies said public order police were dispatched to the area after groups of people gathered on the N2 burning objects and stoning vehicles. A business adjacent to the entrance to New Horizon was damaged. Seven people, aged between 24 and 42, were arrested for public violence.

A police official also sustained head injuries after he was hit with a stone on Saturday.

The situation remains tense. Police are monitoring the area.