By Steve Kretzmann and Chris Gilili 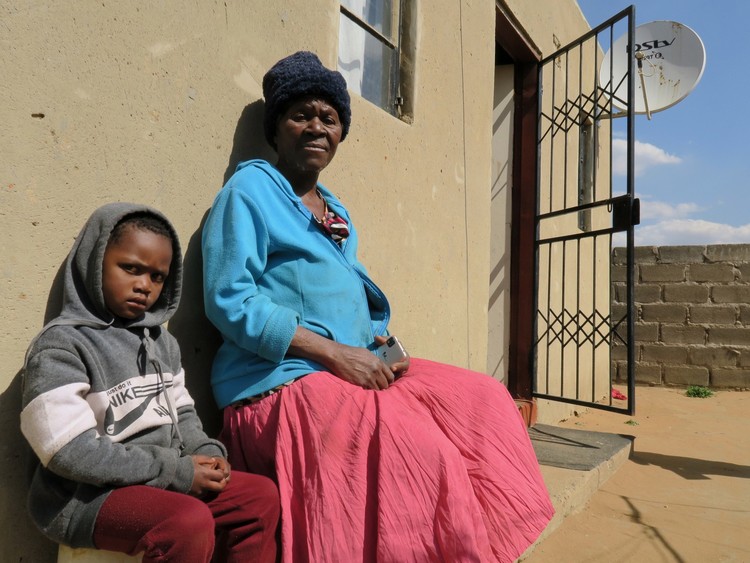 Lettie Mdluli and her grandchild Palesa Nkabinde in Klarinet, Emalahleni, are part of a household of six adults and eight children who survive on child support grants. Tap water supplied by the municipality is often brown, even black, and not safe to drink without further treatment. Photos: Steve Kretzmann

Mdluli, 62, lives with her five daughters and eight grandchildren. No one is employed in her family. The entire household survives on child support grants and a little money they get from recycling.

They try to boil water before they drink it, but between Eskom blackouts and the price of electricity for the two-plate stove they use, sometimes they just drink what comes out of the tap.

“The water is not good at all. It causes a loose stomach,” she says.

“We spend over R300 on electricity alone, because we boil about five litres of water every two days for drinking,” says Poppie Maseko, who lives a block away. “But even then, my husband suffers from stomach pains and diarrhoea.”

Her family survives on two child support grants and a R350-a-month social relief of distress grant. 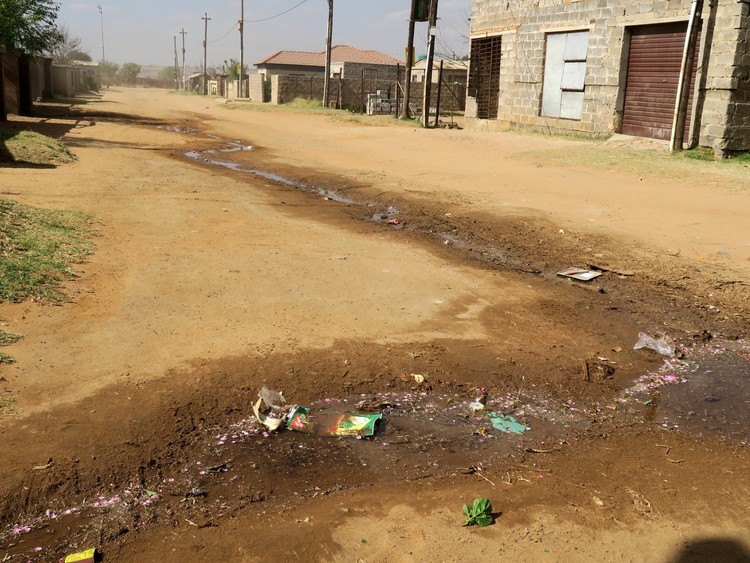 Water leaks are a common sight in Klarinet, in Emalahleni, where the municipality is not only losing water from its distribution network but unable to supply water that meets potable standards.

Results from water tests taken throughout the distribution system are supposed to be uploaded monthly to the national Department of Water and Sanitation Integrated Regulatory Information System (IRIS), an online site that tracks the quality of drinking water and the quality of effluent released from wastewater treatment plants across the country.

The results are depicted as a percentage of compliance, calculated on a 12-month running average, and are made public.

Data analysed from the IRIS site on 18 June showed Emalahleni had 0% compliance on all six indicators. This means that no results were being uploaded, despite it though it is a legal requirement. Questions on this and other matters sent by GroundUp to the Department of Water and Sanitation, which is the regulator, have gone unanswered.

A search on the IRIS site on 15 September showed Emalahleni had an overall acute microbiological compliance of 92%, which is listed as “bad”. For drinking water a minimum 97% compliance is required.

The acute health, chronic health and non-health aesthetic were all in the excellent compliance range, but operational and disinfectant compliance were both listed as “bad”, at 83% and 10% respectively. 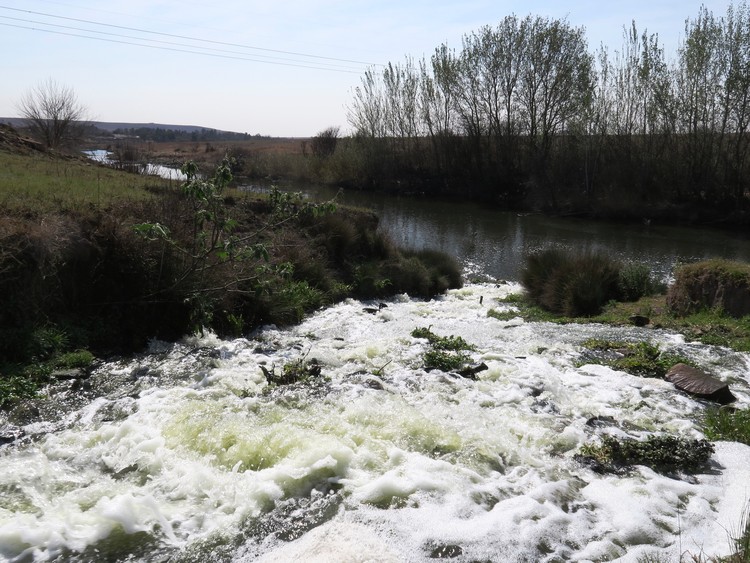 About 11-million litres of partially treated and at times perhaps untreated sewage flows from the Riverview sewage plant into the Olifants River every day.

Yet Emalahleni is not an outlier. The IRIS site shows it is but one of 101 local and district municipalities (out of 151 municipalities across the country) that are failing to provide clean and safe drinking water to residents, according to the data analysed on 18 June. Of these, 35 had 0% compliance across all six indicators.

All of them are failing on microbiological compliance, which is the easiest factor to treat, says Professor Anthony Turton, from the Centre for Environmental Management at the University of the Free State.

Microbiological compliance relates to the number of faecal coliforms in the water. Turton says faecal coliforms do not survive long outside the gut where they originate, and are easily killed with chlorine. 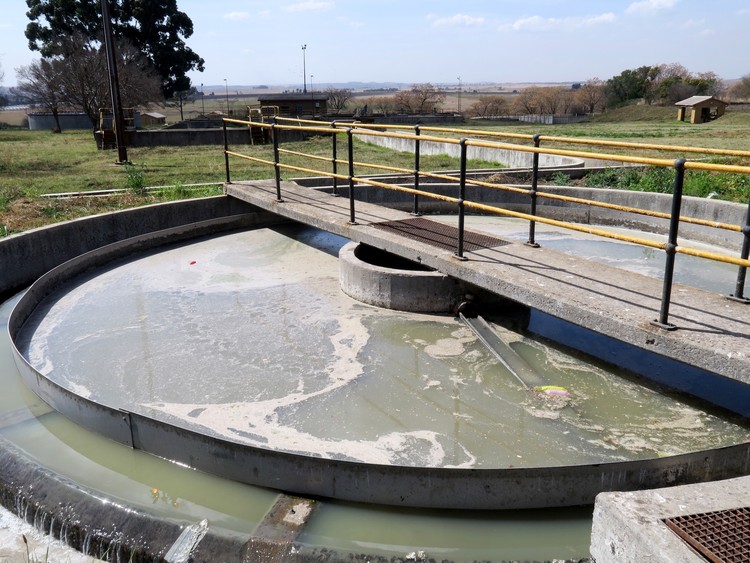 The Riverview wastewater treatment works in Emalahleni had no backup power to operate during load shedding; the screen to remove solids wasn’t working; the buildings were dilapidated; and the plant was having to operate over capacity. The objects floating in this clarifier are a result of failure of the screening process to remove solids.

But untreated sewage is flowing from the wastewater treatment works operated by the municipality, into two dams from which drinking water is extracted.

Emalahleni municipality is responsible for eight wastewater treatment works where wastewater from domestic residences, industrial, and health facilities is treated before being released back into rivers and streams. There are three compliance indicators for wastewater: microbiological, chemical, and physical characteristics.

The IRIS site shows all eight of Emalahleni’s wastewater treatment works fail to treat the wastewater to minimum standards, and have been failing since at least 2020. As a result, about 44-million litres of untreated or partially treated sewage are released into the environment every day.

Three of these failing wastewater treatment works release 11.2-million litres of effluent into streams which flow into the Rietspruit and Witbank dams, from which Emalahleni extracts drinking water.

The Rietspruit wastewater treatment works, which has achieved just 31% microbiological compliance over the last 12 months, had three high level failures this year (for ammonia content, microbiological contaminants, and chemical oxygen demand). This plant releases two-million litres of effluent directly into the Rietspruit Dam per day.

According to information on the Emalahleni municipality website, 3.5-million litres of water are extracted from the Rietspruit Dam per day for drinking water treatment.

One of the better-performing wastewater treatment works in Emalahleni is the Riverview works. The 2022 Green Drop Report – a national bi-annual audit of wastewater treatment works by the Department of Water and Sanitation – gave this one an overall score of 42%, although its microbiological compliance was just 21% and and chemical compliance 78% in the July 2020 to June 2021 reporting period.

During a visit to the plant in August, a process controller said neither of the two generators were working, which meant sewage treatment simply ceased during load shedding.

She said the screen, which is the first process where solids are removed from the incoming sewage flow, was not working. Sludge dams were full, and the sewage flow was greater than the plant is designed to handle.

“It’s been more than ten years, and this plant has been dysfunctional from way back,” she said. “We report these things, but the municipality takes a long time to fix them.”

Weeds, broken machinery, and dilapidated buildings are evident within the plant. The building where staff are supposed to attend to administration and take lunch breaks lacks ceiling boards and what furniture there is, is old and broken.

“Even our senior supervisors are very much aware of the conditions here. They come to this plant. But nothing is being done to rectify the situation,” she said.

According to the Auditor General, the municipality was over R3-billion in debt as of 30 June last year. 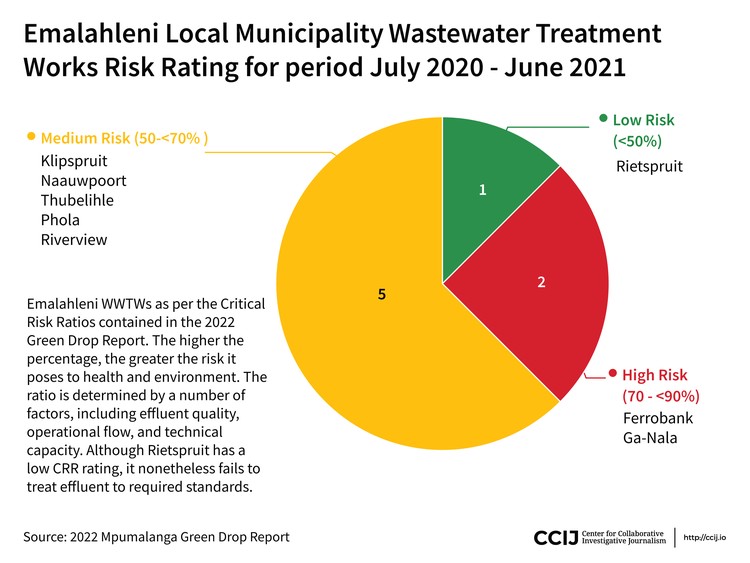 Providing a late response, Department of Water and Sanitation spokesperson Sputnik Ratau, said directives issued to Emalahleni municipality to remedy failures at Rietspruit and Riverview wastewater treatment works in November 2019 and November 2020 respectively, had been ignored. Follow up inspections at both works on 17 November 2021 found “there was no remedial action taken to rectify contraventions”.

“The Department is currently in the process of taking further enforcement action against the municipality,” stated Ratau.

Similarly, notices requiring the municipality to provide compelling reasons why a directive should not be issued for Ga-Nala and Thubelihle wastewater treatment works, were issued on 23 July 2021.

Ratau said there was no response from the municipality, and directives for these two treatment works were then issued in February, following inspections in November last year. He said follow-up inspections on 13 July found the directives were not being implemented.

Regarding Emalahleni’s drinking water provision, he said DWS had engaged with the municipality on its failure to submit potable water quality data to the IRIS site, and is “closely monitoring the implementation of a plan” provided by the municipality, and “providing support where needed”. 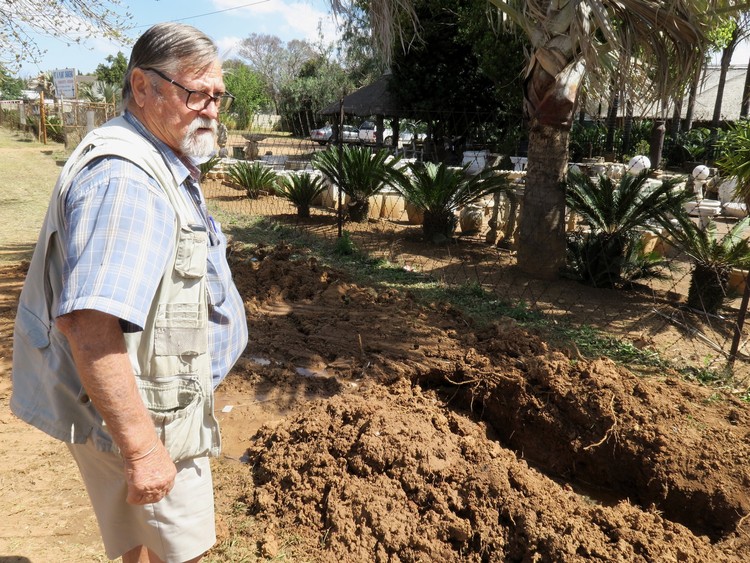 Emalahleni resident Hennie Beukes, who runs a nursery and bar, inspects a burst water pipe just outside his property in August. Beukes said the leak was fixed, but the pipe burst again when the municipal workers filled the trench. He said he phoned the municipality every day for two weeks, but the leak was not fixed again. Without the borehole he sunk on his property, he would not have been able run his business, he said.