Yet the municipality claims the area is cleaned and serviced regularly 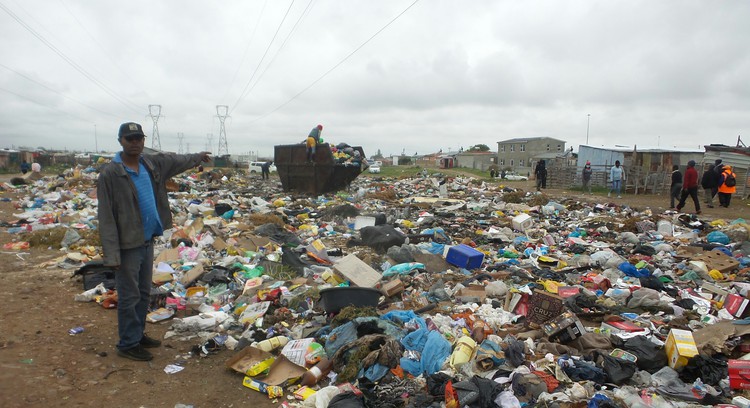 Daniel Musoni, a resident of Powerline informal settlement in Motherwell, Gqerbeha points out the mounting pile of rubbish near their homes. Residents say the rubbish has not been cleared in months. Photo: Joseph Chirume

Residents of Powerline informal settlement in Gqeberha say their portable toilets are filled to the brim with faeces. Rubbish is strewn everywhere and water tanks in the community have not been refilled for a month.

Many people we spoke to said they did not vote on 1 November because they believed their situation would remain unchanged.

Powerline informal settlement is between NU8 and NU10 in Motherwell. The Nelson Mandela Bay Municipality delivered toilets and three water tanks in April 2020 in a project to curb the spread of Covid in densely populated townships.

A vacant spot near the shacks has also become a dumping site and residents say it has not been cleared for several months.

Monica Klaas has been living in Powerline for three years. She said their living conditions have become unhygienic and dangerous. She added people contracted to clean the toilets only do so after a long period of time, resulting in the foul smell.

Most people resort to relieving themselves in buckets in their shacks and emptying it at the dump site and others who can afford to pay R2 to use toilets in houses nearby.

Daniel Musoni and his girlfriend’s shack is near the toilets. “Using the bush is better than these toilets. I am using a friend’s toilet in one of the formal houses near this settlement. Clean toilets and provision of clean water are basic human rights enshrined in our Constitution,” said Musoni.

When GroundUp contacted Nelson Mandela Bay Municipality and included photos from the area taken on 8 November, spokesperson Mthubanzi Mniki said that officials were there last week and “it was cleaned.”

Mniki said a team would check on the situation again soon. When we returned to Powerline on Tuesday afternoon, residents confirmed that the toilets had been cleaned that morning but the rubbish remained.