Over 3,000 people in Madibeng face eviction

Occupiers to oppose their removal in court on 26 May 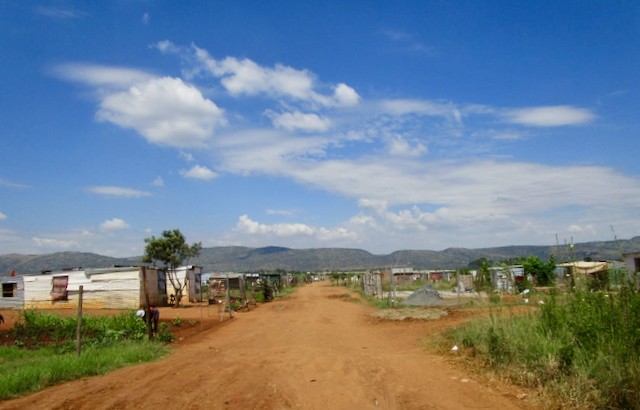 In late 2018, hundreds of people moved onto vacant land and built shacks in Madibeng near Hartbeespoort next to incomplete RDP houses. The Sunway Phase 1 RDP housing project had stalled, with about 1,000 instead of 1,500 houses built.

In 2020, in the wake of Covid pandemic job losses, more people occupied the land – farm portion 218 Rietfontein. Over 3,000 people have now settled there, some for over four years. They have been living without basic services. Madibeng Municipality wants to evict them.

At the beginning of March this year, residents were served notices of eviction, citing a court order from 2019, and ordered to remove all their structures. They were given a month. No alternative accommodation or land was offered.

Lawyers for Human Rights (LHR) successfully made an urgent application in the Pretoria High Court on 13 March to prevent the Madibeng Municipality, the Sheriff and SAPS Hartsbeeportdam from evicting the residents.

“The parties have to come before court on 16 May again to state why this order should not be made final,” said Deborah Rudaba, attorney at LHR.

“We intend to launch a rescission application against the 2019 eviction order afterwards, because the circumstances have changed and the community was not aware of eviction proceedings at the time,” she said.

Peter Masemola moved onto the land in 2018. He said occupiers came from Sunway Village, Hartbeespoort and from informal settlements nearby. They included people who had been renting RDP houses but who could no longer pay rent as they had lost their jobs. Most had also failed to qualify for the Sunway Phase 1 RDP housing project.

According to Masemola, “ANC comrades” encouraged people to move onto the land. Some people say that they paid up to R4,000 for a plot.

“The Madibeng Municipality should understand our plight,” said Masemola.

Percy Senyolo said, “I came here, coming from a small house in Sunway Village, where we were seven children living with our parents. It was a chance for me to have my own house as I am unemployed. I am now used to living in my own house with my own family. I cannot take my family back to share with my brothers and sisters at home.”

Residents have set up an office where people can report their circumstances.

Louise du Plessis, of LHR, said, “I can’t believe in this day and age that there is a municipality that does not understand the law of evictions. The Madibeng Municipality did not even make alternative accommodation available for the residents and that is disregarding the law. The order they are using is from 2019. It is just inhumane and undignified to expect people to end up on the side of the road after an eviction.”

“In this case, they should even give people … land so they can build houses for themselves because the land they occupied is already earmarked for development.” 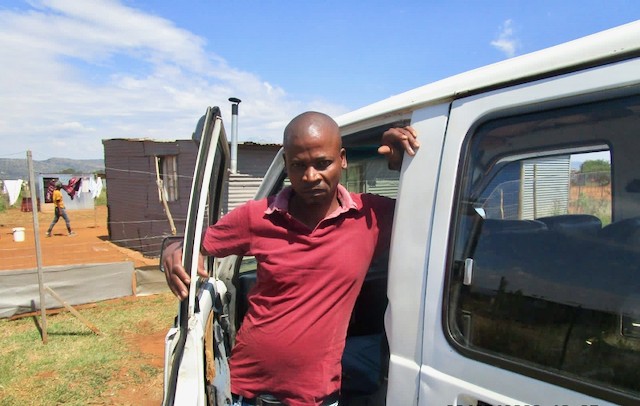 Skhumbuzo Buthelezi, who moved from Soweto in 2018 to the Madibeng settlement, has established a taxi business in the area

ANC convener for ward 30, Isaac Tau, admitted that “some people from the ANC allocated people stands. The people were supposed to have qualified for housing in Sunway Phase 1 RDP houses. The RDPs were supposed to be 1,500 houses, instead they built only 1,006 houses, so some people were allowed that empty space where the houses should have been built.”

Tau said ANC members who were selling stands fled the area when the party investigated.

He said the municipality “should leave the people there and check whether or not they qualify for houses and allow people who can build for themselves to do so”.

But Madibeng Municipality spokesperson Tumelo Tshabalala said further phases of the planned housing development had been “intercepted after phase 1 by this invasion of land”. He said phase one was completed with 1,005 houses “as per the plan”.

Tshabalala said it is an illegal occupation and a court process will determine “whether they stay or go”.