“Our living conditions are disgusting and dehumanising” 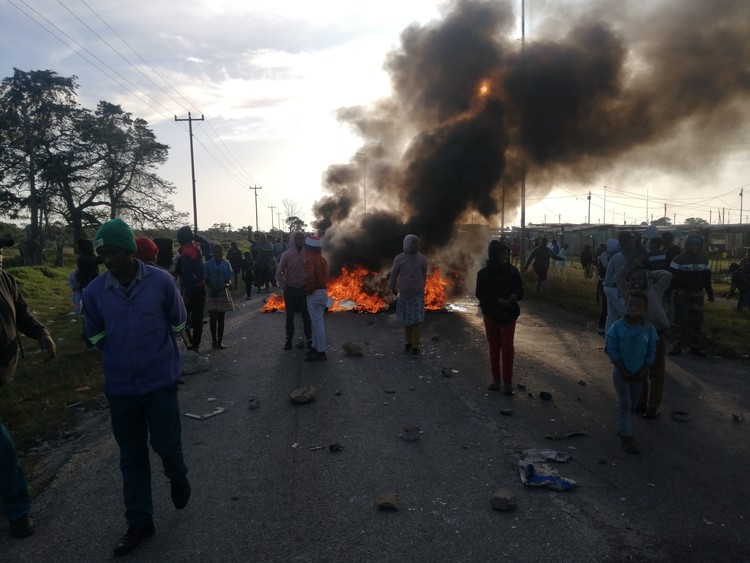 Residents of Kuyga township in Gqeberha have been protesting because sewage has been overflowing into homes. Photos: Mkhuseli Sizani

Hundreds of residents in Kuyga township in Gqeberha have been protesting for three days, demanding that the municipality upgrade the sewerage system and electrify shacks in the area.

Earlier in the week, protesters closed down the office of Ward 40 Councillor, Jason Grobler (DA), before blocking surrounding roads with burning tyres, rubbish, trees and rocks. They also uprooted some street lights.

On Wednesday, protesters, mostly women and children, took to the streets around 3am. The Public and Order Police were called to disperse them but they demanded to be addressed by a municipal official.

Mthuthuzeli Patikala, a community leader and RDP homeowner, told GroundUp that residents were fed up with having to live in inhumane conditions. “On Sunday 30 households reported to me that sewage has been flooding their homes for a month.” He reported these cases to Grobler and the municipality to no avail.

“Grobler never comes to our areas to see our living conditions. Our children can’t play in the parks because it is flooded with sewage. There is no human being who can live day and night staring at his own pee and poo,” he said.

Simon Rabula said he has been reporting the blocked drain next to his house for four months. “The municipality does not even give a reference number that proves I have been reporting. Since this drain has been blocked, all the sewage comes back up our toilet and floods the house. Yesterday I dug a trench to channel the sewage out of the yard. But it is becoming worse every day,” he said.

Babalwa Wonci lives with her six siblings. She said their toilet has been blocked since November. “During the day, we are forced to cross this road and relieve ourselves in the bush which is full of snakes. At night we relieve ourselves in buckets and throw it there in the morning. Our living conditions are disgusting and dehumanising,” she said.

Shadrack Masumpa, who lives in the informal settlement, said that a project to electrify about 4,000 shacks started in September. He said only 1,500 shacks had electricity by December. “The project resumed early this year but only 50 shacks were completed when it was stopped in March. We were told that there was no budget to continue,” he said.

Masumpa said they are demanding that the project be completed.

Patikala said illegal connections in the area were overburdening the electricity supply. “We have about 1,300 RDP households, but we always experience outages because the shack dwellers are connecting directly from our electric poles. Our food rots and our electric appliances get damaged.”

When asked about the electrification project, Councillor Grobler said it is expected to resume next month. “The project reached a stage where work was done as per budget received. More budget was requested and was granted at the Integrated Development Plan public meeting of 26 May 2022.” The new budget will be loaded after 1 July, he said.

Questions about residents’ sewage complaints were sent to Mthubanzi Mniki, municipal spokesperson. We are yet to get a response. 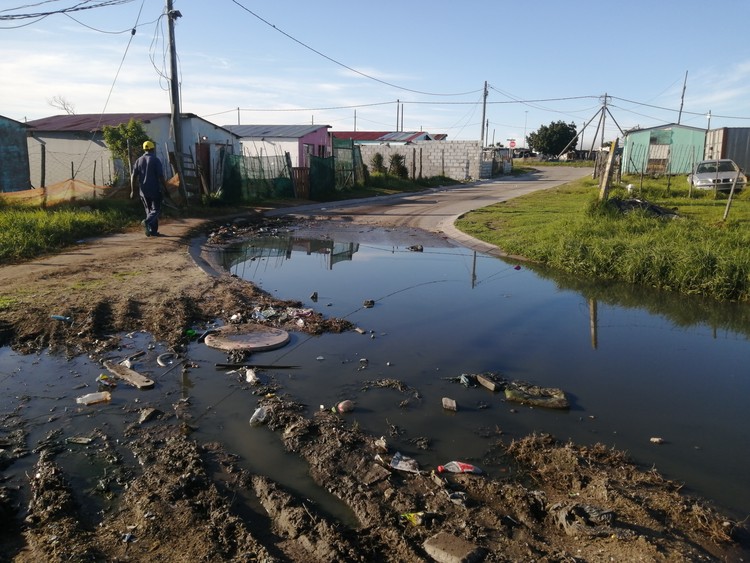