Broken toilets are a big problem across Cape Town’s townships

In a Khayelitsha neighbourhood, it’s so bad that instead of using the City-supplied toilets, people are defecating in buckets and throwing the waste in a field

Mavis Saunders from Harry Gwala informal settlement in Philippi, Cape Town rakes puddles of foul smelling sewage water from outside her door. Her shack is near a broken pipe that has been overflowing for nearly nine months. Photos: Nombulelo Damba-Hendrik

Every morning Mavis Saunders from Harry Gwala informal settlement in Philippi, Cape Town wakes up to puddles of foul-smelling sewage water outside her door. Her shack is near a broken pipe that has been overflowing for nearly nine months.

Saunders has been living in the area since 1996. She shares a four-room shack with four children. She says the overflow is caused by blocked toilets in the settlements.

Saunders says City officials have visited the area several times but leave without fixing the toilets. When residents question the officials, they are told it’s a different department’s duty, she says.

Community leader Nosakhele Zenzile says there are more than 1,000 shacks in Harry Gwala. The City installed 120 flushed toilets but only ten currently work. “I know the number because we counted them a few days ago,” she says.

“The only thing the City’s solid waste and sanitation departments are doing is pointing fingers at each other on who should fix the toilets,” she says.

Across the city’s informal settlements there are generally two types of communal toilets that the municipality provides: portable chemical ones — often called by their brand name “Mshengu” toilets — and flush toilets in concrete enclosures. The latter are generally better, if they don’t get clogged up.

At BM informal settlement in Khayelitsha, residents say 130 toilets in the area are either blocked or vandalised. Many people now relieve themselves in buckets inside their shacks and then throw the waste on the open field next to the N2.

Resident Pumeza Naka, who lives in a one-room shack with her daughter, said she tries to relieve herself while at work but uses a bucket when at home.

At Qaduqadu informal settlement, on average about ten families share one portable chemical toilet each and these are emptied three days a week.

Ward 89 Councillor Thando Mpimpi oversees both BM and Qaduqadu. He acknowledged that most of the toilets in BM Section have not been working for two years. “Some toilets were not properly installed. People stopped using them in fear that they might fall while they are inside,” he said.

Mayco Member for Water and Sanitation, Zahid Badroodien, said: “There are approximately 390 chemical toilets in the area at a ratio of about one toilet for every 10 households. This ratio is because the services were rolled-out as part of the Emergency Response due to the Covid pandemic.”

He said that informal areas “are very dynamic environments, and as such, the number of households may have grown since the above ratio was recorded”.

Badroodien said there are chemical toilets in the Qandu Qandu section. “The City shares residents’ preference for full flush toilets as these are cheaper to install and maintain. However, it is not always possible to install flush toilets for various reasons, including a high water table. The City is awaiting the latest enumeration figures from the Solid Waste Department as this will determine the number of toilets needed to provide an acceptable level of service, which is 1:5.” 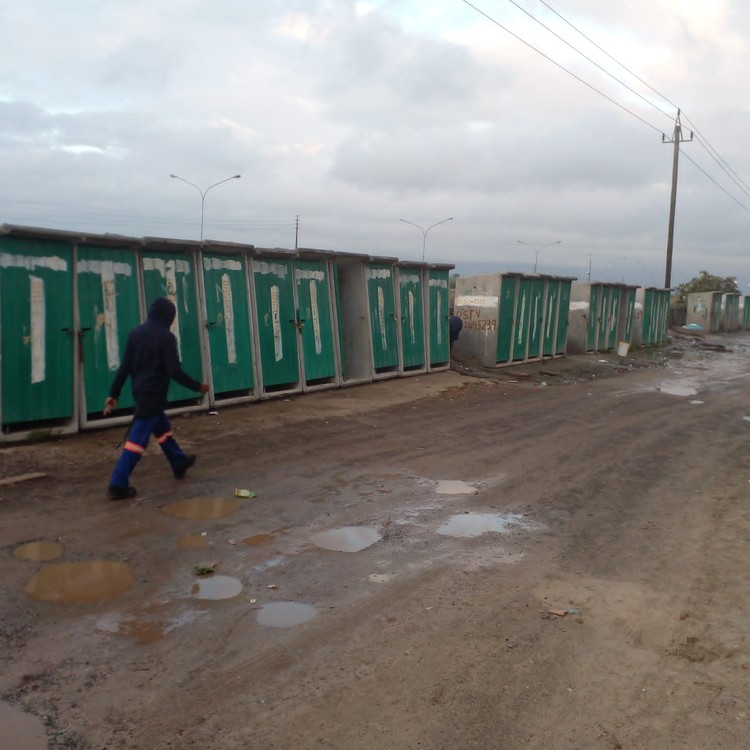