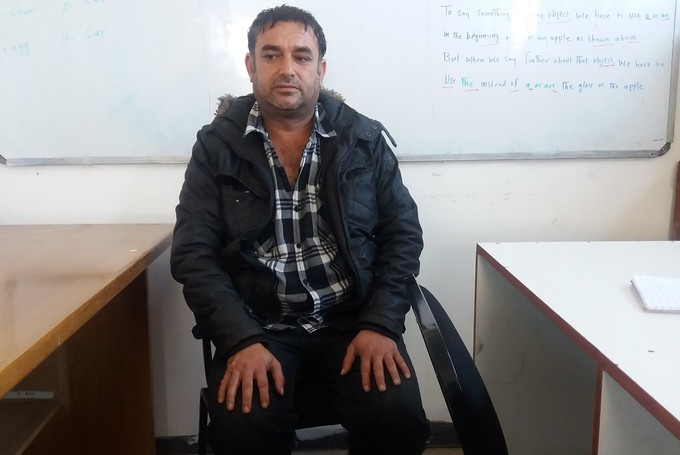 Mohsan Ameen, who lost a kidney after a police shooting in 2005, faces a hospital bill of more than R98,000. Photo: Tariro Washinyira

Mohsan Ameen has to pay a bill of more than R98,000 to Groote Schuur Hospital. This is for the care he received after being shot in error by a police officer, he says, in 2005.

No investigation has been completed. Ameen, who lost his kidney, has never received compensation, or an explanation from the police.

Ameen, who is an immigrant from Pakistan, says he was driving from Bellville on a Wednesday night in February 2005 with his friends.

“When we reached the R300 on our way to Mitchells Plain, a police officer stopped our car.”

A shot was fired.

“The bullet came through the boot and smashed my kidney. When I touched my right side there was blood on my hand,” Ameen says.

The police officers had mistaken them for robbers, he says. They searched the car and found nothing incriminating. An officer called an ambulance and Ameen was taken to Groote Schuur Hospital. He was hospitalised from 2 February to 14 May 2005, running up an account of R98,000 which was handed over to debt collectors in 2007, says the hospital.

When he came out of hospital he went to the Philippi East police station to make a complaint. He found that a case of attempted murder had been opened by a Constable Gubela of SAPS Philippi East in February 2005 on Ameen’s behalf.

But attempts by Ameen to find out what has happened to this case have failed. The last time he went to Philippi East Police station, he was told his case was not in the system.

Yet he has a document issued at Philippi East police station which shows that Gubela opened the case on 27 February 2005. Warrant Officer Gideon Westrat is specified as the investigating officer for case number 194/2/2005.

When GroundUp went to Philippi East police station with Ameen to contact Westrat we were told Lieutenant Colonel Mzimasi Dyani was now working on the case. Dyani said Ameen should get a lawyer to contact the SAPS legal department, which would then give the lawyer the documentation needed to sue the Minister of police.

Technically, said Chimoné Claassens, an attorney at Laubscher & Hattingh who is representing Ameen, the time period within which he could sue the Minister had expired. Section 12 of the Prescription Act provided for a maximum of three years to pass within which court action for compensation could be started, she said.

But Claassens said though the allotted time had lapsed, there was recent case law showing that the three-year period only begins when a person becomes aware of the fact that he or she has a claim.

Claassens gave an example of Constitutional Court judgment of 30 March 2016. In that case a man had been treated negligently by a Northern Cape hospital. He had not sued within three years of the incident occurring, but the Constitutional Court appears to have ruled that the three year period only began at the point where the man had knowledge of all the facts from which his claim arose.

Meanwhile the Independent Police Investigative Directorate (IPID) say they will not investigate a case prior to 2012.

In an email, Robbie Raburabu, Acting National Spokesperson of IPID said that in 2005, the department didn’t investigate cases involving police shootings in which no one died.

“We only started investigating discharges of official firearms since 1 April 2012,” he said.