Elections 2021: Despite scandals and huge wastage, the ANC council looks secure in Hantam

This Northern Cape ward covers a massive amount of territory and only has 22,000 people, but it exemplifies the local government problems across the country 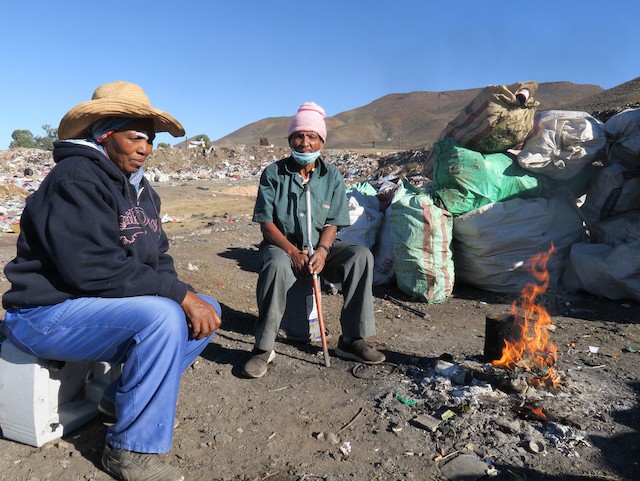 Magrieta Pampier, who makes a living collecting recyclable metal and glass at the Calvinia refuse dump, and Jan Hugo, who helps her, boil some vegetables for breakfast. “They don’t really want to help,” she says referring to the municipal management. All photos: Steve Kretzmann

This is the first of our articles profiling interesting wards in anticipation of the upcoming local elections. Today we look at Hantam in the Northern Cape.

A DA ward councillor in the ANC-led Hantam Municipality was suspended last month. Councillor Jeanette Steenkamp refused to comment on the matter, but she had taken the mayor to court for allegedly assaulting her in March 2018.

The Hantam Municipality in the Great Karoo has its centre in Calvinia and includes Brandvlei, Loeriesfontein, and Nieuwoudtville. A council of just nine councillors governs this vast (36,000km2) but sparsely populated area with 22,000 people. Some of the five ward councillors are situated in towns at the end of gravel roads over a 100km from the central municipal offices.

McGluwa said Steenkamp, who holds ward 4, which has Nieuwoudtville as its largest town, had on 19 March 2018 walked in on an altercation between Swartz and DA PR Councillor Gizella Opperman (now a Member of Parliament). McGluwa said there was a personal fight between Steenkamp and Swartz and “it is rumoured” he struck her.

According to a timeline compiled by Steenkamp, she sought a protection order against Swartz three days later, on 22 March 2018, resulting in her being forbidden by the municipal manager from attending council meetings, in favour of the mayor attending these meetings. The reasoning, as laid out by the disciplinary committee findings, was that being in the same room with her for the council meetings would cause the mayor to violate the protection order against him.

Having laid a charge of assault against Mayor Swartz, the first court appearance, in the Nieuwoudtville Magistrate’s Court, was on 24 April 2018, with the trial getting underway in August. Before Swartz was called to the stand, he approached Steenkamp’s counsel to negotiate a settlement, which Steenkamp initially resisted, but later agreed to. A settlement, which included the details of the case not being made public, was reached in September 2018.

Despite the settlement, disciplinary proceedings were brought against Steenkamp in November 2018, with the disciplinary hearings taking place in January and February this year. She was charged for laying a false charge of harassment and assault against Mayor Swartz, laying a false charge of intimidation against municipal manager Jan Swartz, that she placed the council and the mayor in a bad light due to media coverage of the case, and that she violated the council’s code of conduct.

Last month, 22 April, the disciplinary committee ruled she was guilty on all counts except those pertaining to the media, and recommended the provincial MEC for local government suspend her without pay for four months.

Mc Gluwa said although the case against Swartz was in his personal capacity, he used council funds to defend himself in court. For this reason, the DA has laid a charge against him for abusing public funds. 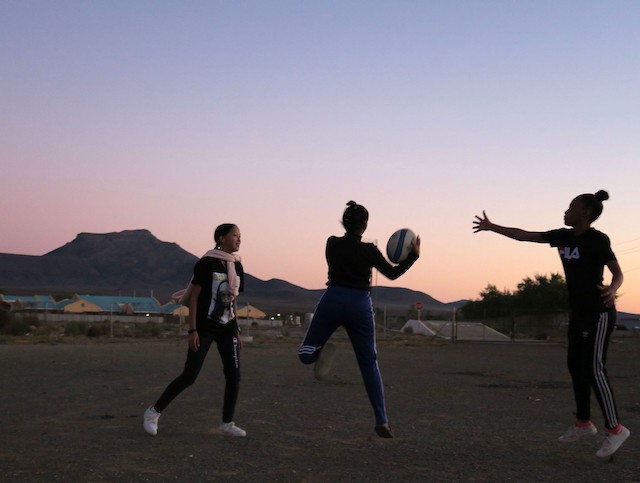 A group of girls play touch rugby on the gravel street as dusk falls on Calvinia. They said they play rugby for the Griquas under-16 and under-18 teams.

With 49% of the vote, the ANC narrowly failed to secure an outright majority at the 2016 local government elections, resulting in the ANC holding just one more municipal seat than the DA, with a 5–4 split.

But two subsequent by-elections have strengthened the ANC. A ward seat slipped from the DA’s grasp by a six-vote margin at a by-election on 7 August 2019, resulting in the ANC holding six seats to the DA’s three. The August 2019 by-election was due to DA councillor Gizella Opperman having been moved to Parliament.

A November 2020 by-election in ward 3 (Brandvlei) came after ANC ward councillor Frik Sterkse died. The ANC saw its support increase by almost nine percentage points, rising to just under 64% in the ward. 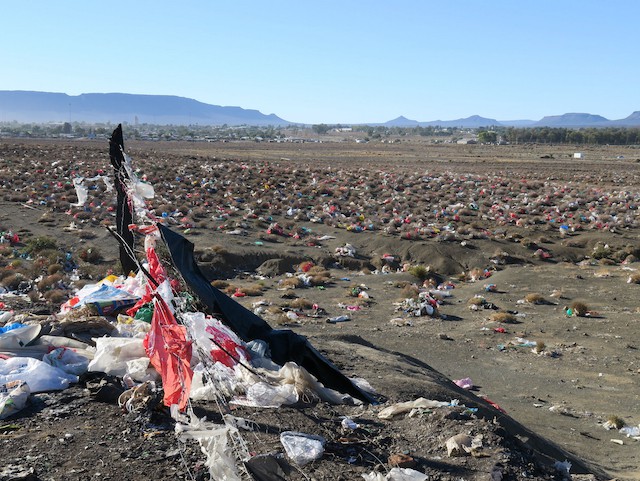 Calvinia, the seat of Hantam Municipality, as viewed from the waste disposal facility.

Calvinia has numerous derelict buildings. There is an abandoned three-storey hostel. Railway sidings have shattered windows. Crumbling eaves gape onto the town’s streets.

Magrieta Pampier, who collects metal and glass from the municipal dump for recycling, has tried to engage the municipality to use these buildings for her small business operations. She is desperate for proper storage space.

Pampier said her yard in Calvinia West is stacked with bags full of the recyclable goods she collects before sending them to Cape Town.

She said Mayor Roger Swartz is aware of her situation and she had also met with municipal manager Jan Swartz three times in an attempt to lease one of the town’s derelict buildings, but to no avail.

“You realise that you just have to leave it as they don’t really want to help. I’m not looking for finance, just a yard or a store,” she said.

At the dumpsite there was no municipal employee and Pampier says no-one from the municipality manages day-to-day activities at the site. The surrounding fences were broken and plastic blown by the wind litters the veldt between the dump and Calvinia-West.

She said about once a week the municipality would send a grader to push the refuse to one side and cover it with soil.

Ward 2 Councilor Henery De Wee, who GroundUp met at his workplace at the provincial roads and public works office, said the dump site did adhere to national licensing conditions. 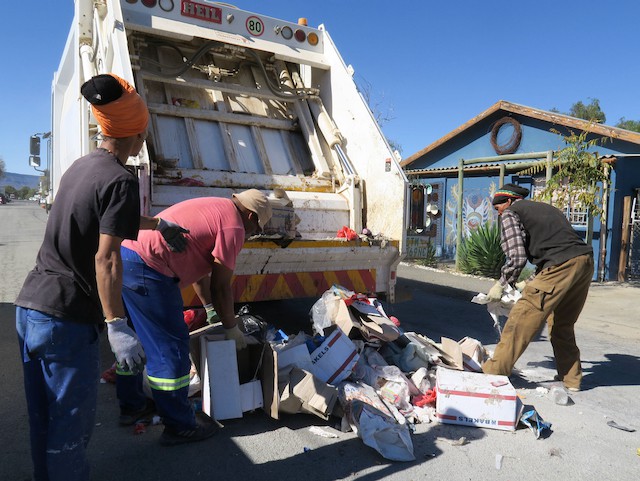 Refuse collection workers pick up garbage spilled out of the truck due to unskilled use of the compacting mechanism. The workers are not permanently employed by the municipality, but through the Expanded Public Works Programme. Nicolaas Cloete, wearing the orange headwrap, expressed unhappiness at this, believing the municipality was avoiding paying a proper salary and benefits, and providing training.

Another derelict building is the Calvinia tennis clubhouse. It has been stripped and only one of its four courts is functional. On this barely functional court, Annemarie van der Merwe offers private coaching to youngsters and a few adults.

Van der Merwe, who moved to Calvinia in 1974, remembers the tennis club being a centre of social activity, but today her pupils don’t even have a toilet to use or a tap to drink from after a training session.

The municipality took control of the facilities in 2007 and correspondence between it and the tennis club reveals strained relations.

Van der Merwe said the tennis club was the only organisation to respond to a 2009 tender to hire and restore the clubhouse and two of the tennis courts, but the bid was rejected.

However, she says she has about 50 pupils and she is “very proud” of their wins against competitors from other regions.

De Wee was dismissive of concerns over the state of the tennis courts and the clubhouse, saying the municipality had invested in a new multi-purpose sports complex, although it had not been able to open it to the public due to Covid-19.

GroundUp made numerous enquiries, including to municipal officials, but no one knew anything about a new multi-purpose sports complex. There is however a multi-purpose court in Calvinia-West, but it was locked and strewn with stones.

The town’s municipal swimming pool has been closed for a number of years. De Wee said this was because of the drought.

Calvinia’s water supply has however remained secure and clean. De Wee said water was supplied by boreholes and Akkerendam to the north of the town. The Calvinia water treatment works has recently been upgraded at a cost of R27 million, and R127 million has been spent on bulk water supply completed last year for Brandvlei, the driest town in the dry region. 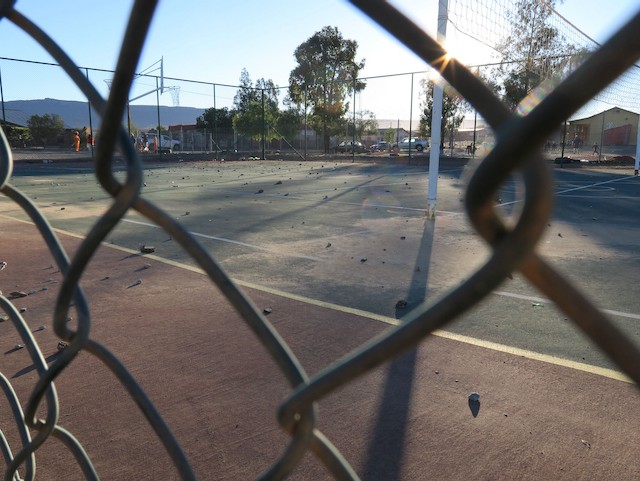 A multi-purpose court in Calvinia has remained locked since April 2020 when the level 5 Covid-19 lockdown was announced. It is strewn with rocks.

The municipality’s financial performance, tracked on Municipal Money, is concerning. Although the 2019/20 financial year figures are not available on the National Treasury initiative, the figures up to the 2018/19 year reveal capital budget under expenditure of 25% despite the large water treatment works projects.

Also 78% of Hantam Municipality’s 2018/19 operating expenditure was deemed unauthorised, irregular, fruitless and wasteful. It was 95% in the previous financial year.

The 2019 debtors collection rate was 80%, indicating an inability to collect rates and revenue for services from a significant sector of the population. Although it had a R2.6 million cash balance at the end of the 2019 financial year, this was only enough to cover its operating costs for about ten days.

Questions to the mayor’s office regarding Steenkamp’s suspension have also received no response.