Former managing director describes transfer of patients by health department as “hurried”, “haphazard” and not conforming to discharge procedures 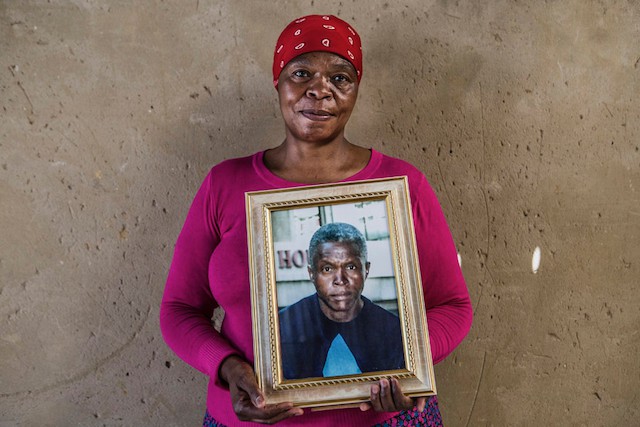 Ntombifuthi Dhladhla holds a photo of her late brother, Joseph Gumede. The last day Dhladhla saw Gumede alive was on 23 December 2015. He died in July 2016 but Dhladhla and her family were only told in February 2017. Archive photo: Mark Lewis

Former Life Esidimeni managing director Dr Morgan Mkhatshwa warned Gauteng Health department officials that the “rushed” process of transferring patients out of their care would be “disastrous”, the Life Esidimeni inquest heard in the Pretoria High Court on Tuesday.

The inquest will determine if officials are criminally liable for the deaths of 144 mental healthcare patients after they were moved from Life Esidimeni to smaller NGOs.

Mkhatshwa said he was informed that the contract between Life Esidimeni and the Department would be terminated due to costs by former Health MEC Qedani Mahlangu, Dr Barney Selebano (former head of Gauteng Provincial Department of Health), and Dr Makgapo Manamela (former director of mental health for GPDoH).

Mkhatshwa called for a meeting with Manamela and the mental health directorate in 2015 to discuss the way forward but was not presented with a clear plan.

“Life Esidimeni raised concerns of the haphazard way by which this process was conducted and that it may result in disastrous consequences. We proposed an extension of the process to 30 September 2016, to ensure a smooth transition, and it was declined. Gauteng Health Department officials assured Life Esidimeni that the mental healthcare users will be placed in facilities of similar standards or better,” he said.

When Life Esidimeni was notified that its contract would be terminated, the company alerted the families of the patients.

In November 2015, during a meeting with the GPDoH and family representatives, Mkhatshwa said the families were upset with the Department for not consulting with them before embarking on the process. “The families expressed their anger over the fact that they were not told where their loved ones were going to be placed so that they can visit and inspect the NGO facilities to see if they are of the same standard as the Life Esidimeni was,” he said.

At a later meeting in December 2015, Mkhatshwa said families again asked to visit the NGOs before their loved ones were taken there, but to no avail. Instead, officials from the GPDoH assured them that their families would be placed in a facility similar to Life Esidimeni.

The families then demanded that the process be stopped and a proper consultation be held, Mkhatshwa said.

We kept on warning the officials

During the cross-examination, Advocate Adila Hassim, for SECTION27, which is representing many of the bereaved families, asked whether Life Esidimeni had cut costs to address the concerns of the department. Mkhatshwa responded that costs were already as low as possible.

“We explained to the Department of Health that we could offer the services because of the scale of the Life Health group. We doubted if any NGO would be able to offer the same quality of services at that level of cost,” said Mkhatshwa.

He said the broader Life Esidimeni group would often subsidise staff salaries when they did not receive payment from the health department.

“We would be able to carry on with the services and render services without compromising quality, even if we were not [paid],” Mkhatshwa said. “The compromising of quality was totally against Life Esidimeni’s policy.”

Mkhatshwa referred to a 2007 “trial exercise” by the health department where patients were moved from Life Esidimeni facilities to an NGO called Ikhwezi Lokusa. Fifteen children, who were patients at the facility, were moved to the NGO, where two died. The remaining 13 returned to Life Esidemini “in a very bad shape,” said Mkhatshwa. “We didn’t want that to happen ever again to our mental healthcare users.”

“We kept on warning the officials, particularly the mental health directorate headed by Dr Manamela,” said Mkhatshwa. “I also raised it in a meeting with Dr Selebano, saying this might end up in a disaster.”

Mkhatshwa said Life Esidimeni offered to assist the GPDoH and the mental health directorate with vetting the NGOs that the patients would be transferred to, but there was no response from Manamela.

He said they also made the suggestion to Manamela that the NGOs visit the Life Esidimeni facilities “to get an idea of what they were up against, and learn how to cope with the mental healthcare users”.

Because of the short space of time to transfer patients, the usual “leave of absence” for patients could not apply. Usually, Mkhatshwa said, patients were sent on “leave” for short periods of one to two weeks, after which they were assessed to see whether they had adjusted and could cope with life outside the facilities.

“Once the facility received information from Life Esidimeni’s social worker that the user [patient] had adapted to their new environment, they would be discharged. These processes were not followed during the marathon project.”

Mkhatshwa said that all patients were supposed to leave with a photo to identify them, a summary of their mental and physical health condition, medication, prescriptions, clothing and toiletries.

During cross examination, Hassim said the reports of GPDoH officials stated that some patients had been transferred without clothing, medication or identification documents, to which Mkhatshwa responded: “If that happened, it happened because of the haphazard way the transfer was done.”

In his statement, Mkhatshwa said the GPDoH indicated that it would send a team to the Life Esidimeni facilities to assess the patients.

During cross examination by Advocate Phyllis Vorster, representing four of the deceased, Mkhatshwa said the health officials were deployed to the facilities to determine which patients would be discharged the following day.

This information was then relayed to a multi-disciplinary team of psychiatrists, doctors, and nurses. This team began the preparation process, where the necessary documentation, including a discharge summary, would be prepared for those patients who would be discharged the following day.

The discharge summary provided a comprehensive view of patients’ mental and physical condition, and the treatments they were on.

“For those that were planned for, the [discharge] process went well,” said Mkhatshwa. “But if there were additional users that were supposed to leave on the same day that were not on the list the previous day, that would then create the haphazard and chaotic way of doing it because then they must be identified, get their discharge summary, medication, clothes.”

He said that if the clinicians receiving the patients required more information, Life Esidimeni would not have a problem releasing a copy of the patients’ files. However, the timeframe given and resources made it impossible for patients to be transferred with volumes of files. Consequently, some patients ended up at a different NGO from the one they were referred to.

“It was a hurried process, it did not follow our Life Esidimeni process of user discharge.”

Mkhatshwa insisted that despite the “rushed” process, all patients who were discharged from the facility had their discharge summaries.

“We did not know where the [mental healthcare] users were going to. We were the point of call between the users and the families. So when families came to us and asked where the users went to, we didn’t know. Did we have control over what happened in transit from Life Esidimeni facility to the NGO? Absolutely zero. That was haphazard.”

The inquest continued briefly on Wednesday, but was postponed until 23 July.

The matter is expected to continue on 2 August.