Informal settlement residents are demanding their homes get electricity first 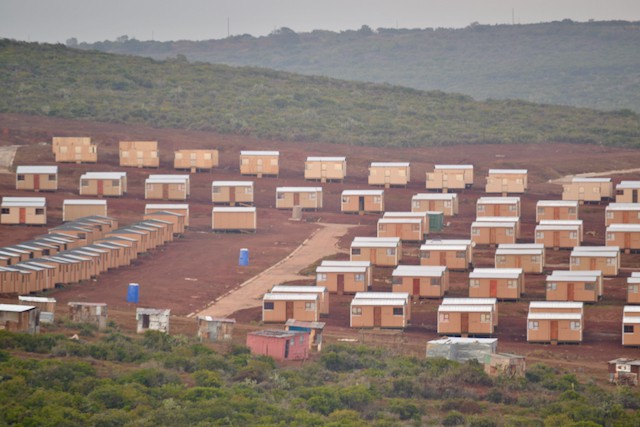 An electrification project which includes these 500 temporary structures was stopped on Friday morning by shack dwellers demanding electrification for themselves first. Photo: Thamsanqa Mbovane

About 200 shack dwellers from Bobani Village, Area 11 in Gunguluza, Kariega, have stopped a R5.7-million electrification project.

The protesters emptied bins and burnt tyres outside the house of Ward 45 Councillor Siphiwo Plaatjies (ANC) in Area 9. Protesters sang: “This dog Plaatjies, is taking us for a ride.”

The 500 temporary structures, called Dubai, are part of a de-densification Covid-19 project, according to municipal spokesperson Mamela Ndamase. It is priority housing for people who are blind or disabled.

Bobani Village arose out of a land occupation in January 2018.

Plaatjies said just because trenches were being dug for Dubai did not mean those houses would be electrified first.

The shack dwellers want more land cleared so that their settlement can be less densely packed. But Plaatjies said it was illegal to clear the bush area as it had to be ”inspected first”. He said there could be important species on the land.

A resident shouted, “Our lives are more important than a butterfly … and tell us which tree is protected in that bush because we will hack it off.”

Plaatjies promised to bring a delegation from the human settlements directorate to explain and resolve the matter early this week.

Protesting and singing residents stopped the digging of trenches on Friday afternoon. The workers packed up and left. Heated exchanges followed between the Dubai residents and the Bobani Village shack dwellers. A mass meeting was then called.

It was quiet over the weekend and there were no further incidents.