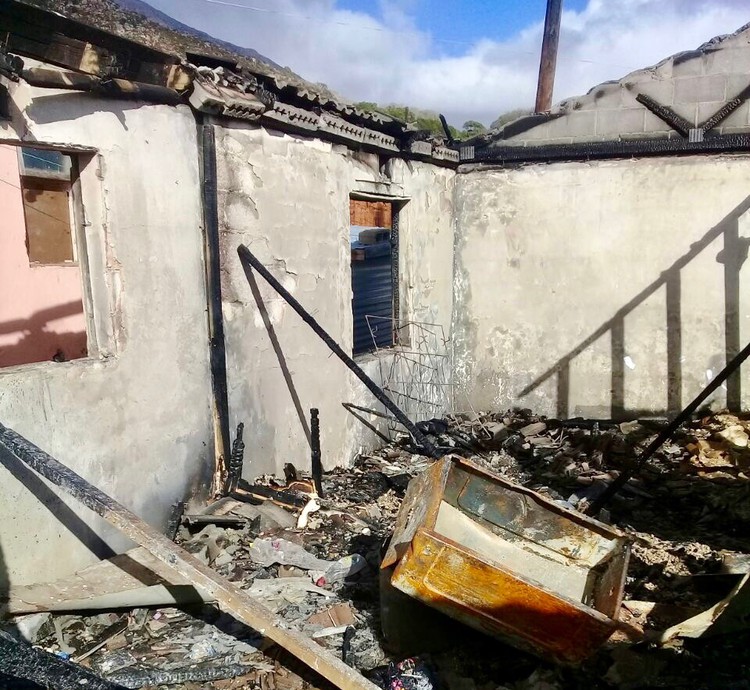 The ANC office and four community leaders’ homes were burnt down in Imizamo Yethu. Photo supplied

On Saturday community leaders in Imizamo Yethu, Hout Bay, met for the first time in many months to resolve their differences. At issue is the reblocking of the informal settlement after a fire razed most of its shacks in March.

The meeting of about 40 community leaders, mostly men, comes after the houses of four leaders who support reblocking were burnt down on Thursday and Friday. Another home was allegedly petrol bombed in retaliation. The ANC’s office was also burnt down.

Pamela Sofika, who represents those opposing reblocking, said that the meeting was called to stop the violence. “We are a community. We cannot continue to kill each other over a disagreement. It needs to stop.”

Sofika said it was also necessary to make it clear who the leaders were that they recognised.

“We do not want someone who stays in a brick house [she was referring to Lungisa Bezile] to make the decision for us. We know the pain, and the reason why we do not want the reblocking. But they [those supporting reblocking] refused to listen to us,” said Sofika.

Another community leader opposed to reblocking, Clifford Nogwavu, said, “I was sleeping with my family when people broke my gate and threw petrol bombs on the window, burning the curtains.”

Nogwavu was mentioned in the court interdict the City of Cape Town obtained against people rebuilding on the site to be reblocked. His explanation was that “the City said it did not have a budget [to house everyone in Temporary Relocation Areas (TRAs)], and that people should start building, and that is the message that I told people with a loud hailer that they should start building.”

Loyiso Nkohla, the City’s liaison officer, did not dispute what Nogwavu said, but he said the City had told people a day or two later to stop rebuilding.

“The City convened a meeting with the whole leadership because of the [large] amount of people we could not accommodate in the TRAs … We agreed that the option was marquees.”

“We did say that we think it may take three months and the community was clear that they did not want any TRA land outside of Imizamo Yethu,” said Nkohla.

He accused Nogwavu of inciting people against reblocking. He said the violence started when the City began removing empty structures.

Ward councillor Bheki Hadebe (ANC) said the empty structures belonged to people housed on the sportsfield who had started to rebuild their homes. “When we went there, we did not go to evict people but to do verification,” said Hadebe.

This angered Nkosinathi Mazele, whose house had been burnt down. He said, “I am one of the victims. My children are traumatised. You [Sofika] can be angry, but it doesn’t allow anyone to burn someone’s property or loot people’s businesses.”

Sofika was arrested later in the day, for allegedly being involved in the torching of the houses. As far as GroundUp can establish, three community leaders against reblocking were arrested.

After the arrests, Mkhululi Ndude, who is in favour of reblocking, told GroundUp: “We agreed to stop the violence [at the meeting]. It was difficult because the other side did not want to listen. We spoke and we agreed that they will go and speak to their people. Unfortunately, it did not happen, because they got arrested before they could convey the information.”

“We have seen that we want the same things … The only difference is that they want more – they want houses. We are saying let’s get better living conditions with services and we will fight for land and housing later,” said Ndude.

Ngowavu said he could not agree to the reblocking “until we speak to the majority of people that do not want it … They are the ones influenced by the fire. I must hear from them what they want.”

Spokesperson for the police, Captain Frederick van Wyk, said: “On Friday night at 9:45pm an operation was initiated by SAPS in Hout Bay to assist with the arrests of protesters in public violence cases.

“Protestors were moving around between shacks and pelted police members and Nyalas with stones and objects. The protesters barricaded the roads at the Imizamo Yethu settlement to prevent SAPS from entering the area,”

He said on Saturday morning the body of a 19-year-old was found with a gunshot wound to the chest.