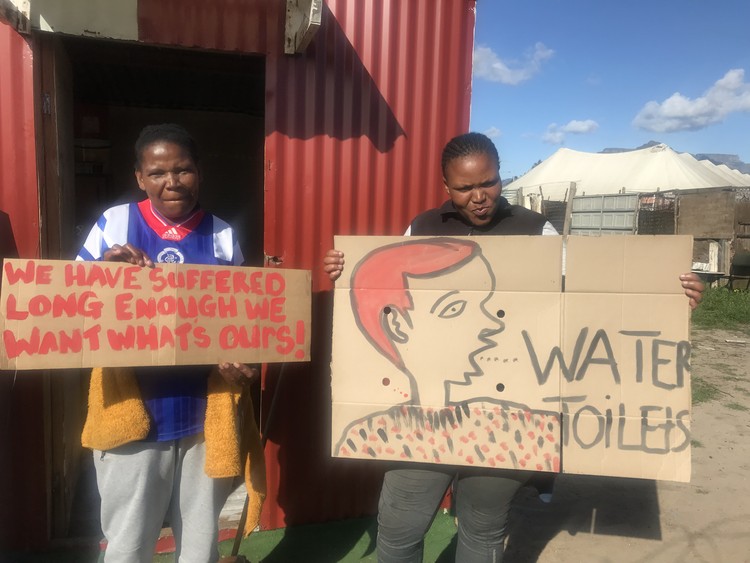 The land on which the settlements, called “Gate 7” and “18 Avenue”, are built, is owned by the Ndabeni Communal Property Trust, formed for the benefit of families forcibly moved from their land during apartheid. The trust has asked the City of Cape Town and national government to move the people living in shacks on the land.

But the people living there say they have nowhere else to go and want sanitation, water and electricity.

Ward Councillor Helen Jacobs says the City does not provide services unless the owner gives permission and the Ndabeni Trust had been unwilling to give approval. She says the City provides containers for refuse collection.

The organiser of Monday’s protest, Phillip Nyalungu Mzamani of Ntirhisano Community Centre based in Salt River, said: “Whether you are on private land or illegal occupation, water and toilets are fundamental human rights.”

Protester Doris Thorne, who lives on land on the Kensington side of the cemetery, said after the protest they held a meeting with the City and councillor Jacobs and were told a meeting with the Ndabeni Communal Property Trust would be organised. “If we don’t get positive results we are not going to stop protesting,” she said.

“Ten years I have lived here and my shack has been thrown down three times by Law Enforcement. Every time we ask for basic services we are told you have never signed a paper to stay here. Our councillor must work with other government departments so that we can get houses and services. Only during Covid-19 we got water that was brought by a truck and two taps were installed. We have no toilets. We use a bucket system which is very unhygienic. The environment here smells of poo and children can’t play outside. We have no waste bins and we need electricity,” she said.

Ndabeni Nomaphelo, a community leader who is raising three children, one of whom is autistic, in her one-room shack, said the Law Enforcement officers conduct regular raids and demolitions.

“If we don’t belong here we should then be taken to where we belong,” she said.

“It is hard to live here without water. People in Goodwood used to open their gates and give us some water but they don’t want to anymore. We travel all the way to Langa on foot to get water. There are snakes in the bush where we relieve ourselves.”

Nomaphelo said at previous meetings the City had promised to provide basic services.

But Jacobs on Monday told GroundUp that there had been “discussions not promises”.

She said what had been agreed was a meeting with the Trust, Public Works, the City and relevant officials. “If it can still be this week, it will happen,” Jacobs said..