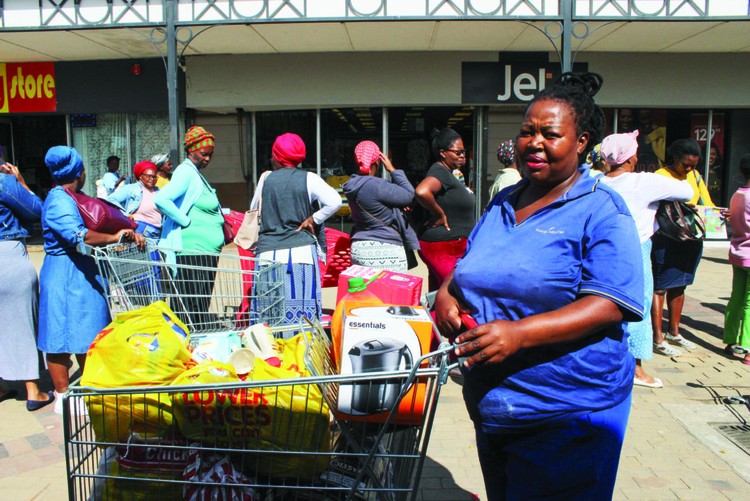 Nobulali Mesani coming out of Shoprite in Makhanda on Tuesday. It was her third attempt to collect her grant. Photo: Loyiso Dyongman

Nozizwe Nombewu, from Extension 9 in Makhanda, had to return to town several times to queue for her Social Relief of Distress grant. She spent R60 on taxis to collect the R350-a-month grant.

Nombewu, 58, said each time she arrived at the Shoprite store to collect the grant, there was already a long queue and the store closed before she got inside. She said she was physically unable to walk all the way to town. She said she has had to borrow money from loan sharks to pay for taxis.

“Now when I get the R350 I have to pay back the loan shark. And then I still have to buy food and electricity,” she said.

Hundreds of people queue at the store since the SA Post Office announced it would no longer pay the grant at post offices.

At 9am on Tuesday morning there were already about 120 people queuing.

Vusumzi Ndabula, from Silver Town, told GroundUp she had woken up at 5am to queue. “I knew there would be people here already at that time. I was here on Monday and the time for the store to close arrived and we were told to come back today. That is why I told myself to wake up very early today. But look, I’m still very far [from the front] and don’t know if I will make it in time again today,” said Ndabula.

Eric Plaatjie, from Extension 7, got up even earlier. He said the hunger of his children at home had led him to wake up at 4am to join the long queue outside Shoprite. “It is about one hour 30 minutes walking time, as I don’t have money to take a taxi,” said Plaatjie.

GroundUp spoke to beneficiaries as they came out of the store with groceries. Some had pockets of potatoes, 10kg-packets of flour and rice, and 12kg bags of mielie meal. They said that they hoped this would keep them out of the shops for a long time.

“I’m seriously desperate to get this money,” said Fezeka Matshona, who lives with her two daughters in Joza. She said she is unemployed except for the occasional laundry job for a neighbour. “I have not paid rent for two months now. I’m afraid of being kicked out by the landlord,” said Matshona.

Nobulali Mesani, from Vukani location, said she had only got her grant on the third day of queuing. “I’m very tired because of standing every day in the queue,” said Mesani.

She said to avoid the long queues, beneficiaries are requested to open bank accounts.