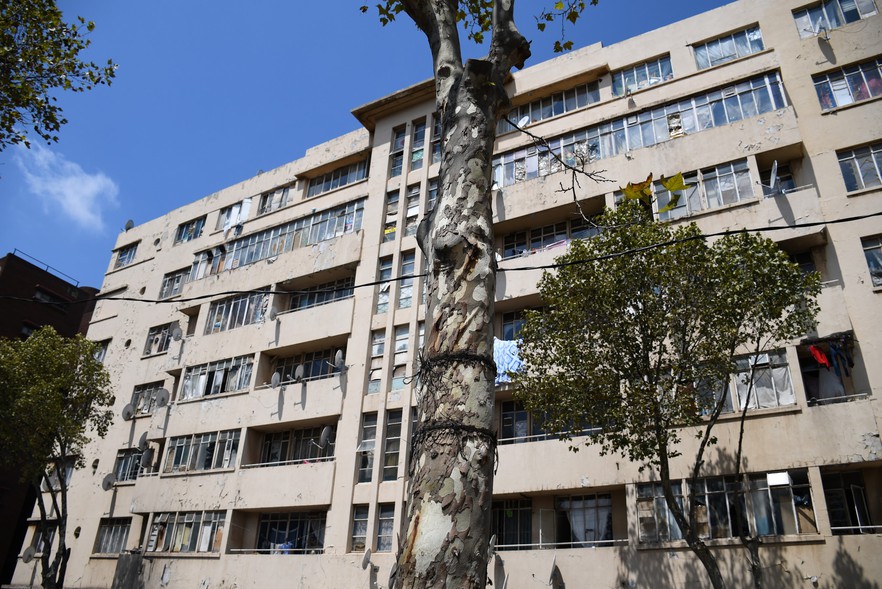 Florence House in Hillbrow has a history of ownership disputes and currently has no one formally maintaining it. Photos: Julia Evans

Residents of the derelict Florence House in Hillbrow, Johannesburg, have come together to remove nearly 500 tons of rubbish, accumulated over years, from their courtyard and are cleaning up the building with the help of civic organisations.

The former Florence Nightingale Hospital building was bought in 2000 by the Learn and Earn Trust. The trust abandoned the building in 2016 and it has fallen into disrepair. Water leaks out of the side of the building, glass windows are broken, electricity wires hang from the ceiling, and the floors are full of puddles.

There are only two working toilets in the building, most of the residents have to use buckets to wash and relieve themselves. All their rubbish and their bath and toilet water has been thrown into the courtyard. “Every year it just gets worse,” says Blessed Ndlovu, a resident since 2001.

Now, with the help of civic organisations The People SA and Move ONE Million, the 600 residents are trying to clean up their seven-storey building. At the end of March, the residents and volunteers from The People SA, Move ONE Million and Goscor scrubbed the walls, mopped the floors, cleaned the windows and repainted the building with supplies donated by Gift of the Givers, BUCO, Jack’s Paint Bedfordview, Simon’s Workwear and private financiers.

Charles Barell, the provincial head of Move ONE Million, told GroundUp that the organisation paid for Pikitup trucks to remove 490 tons of waste from the courtyard. Several residents volunteered to take on the tough job of shovelling the waste into the trucks. When Pikitup workers went on strike, Averda and Bobcats provided trucks to remove the rest of the waste.

Before and after. The left image shows residents and volunteers beginning to clean up the courtyard. The right image shows the substantially cleaner courtyard at the end of the clean-up.

Resident Reuben Chapel has a small room in the basement of the building. The basement residents have it the worst; living right next to the dumping ground of faeces, rubbish and bath water. A few months ago Chapel sent his wife and two children back to Zimbabwe because the state of his home had got so bad. Chapel makes and sells beaded sculptures in Bryanston, but when The People SA came to help, he put his job on hold and volunteered to help remove the waste.

Chapel says he chooses to stay at Florence House because he loves the sense of community. “Truly, I love this place. It’s long I’ve been living here, all my kids were born here,” Chapel explains. “The people around me, they are the best, we are one. After work we meet for a beer or a cooldrink, we live like a family.”

Rebecca Mafulako, one of its first residents, has been at Florence House since 1996. “We are friends, we help each other. When I need sugar I go to her,” says Mafulako, pointing to another resident. “I go to the crèche to get a cup of coffee.”

Siphelo Gcina Manyana is one of the residents helping move the waste from the courtyard. “The kids are growing up and they can’t live like this. So this is the reason we’re taking action,” he says. “It might not be perfect, but we’ll try our best.”

“I think it’s really hopeful,” said resident Doris Mdunge. “The people who are unemployed and staying around here – it’s a good thing, keeping them busy. They’re doing something about their flat instead of them ruining it. It’s all of us that made it bad like that, so it’s us that needs to fix it and clean it up again.” 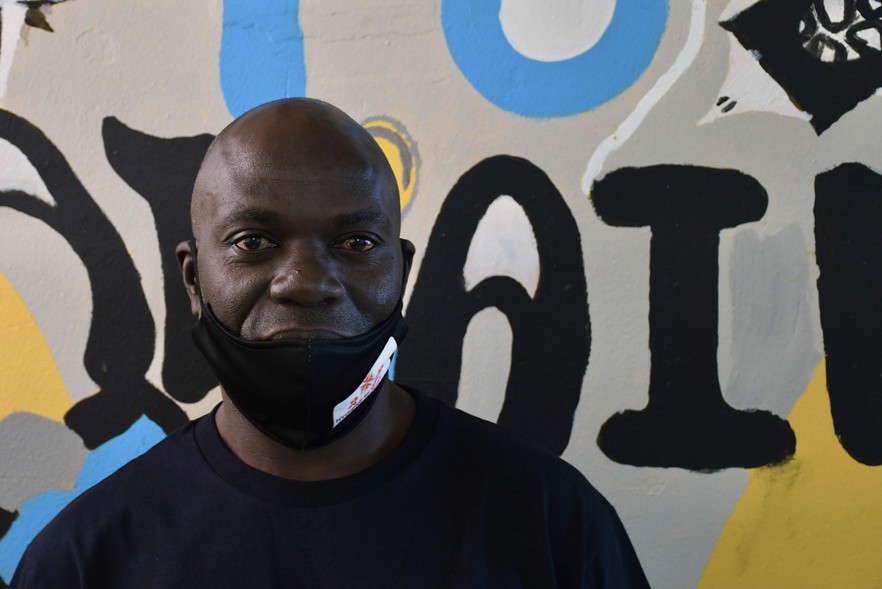 Juma Sebichwu started Malaika Orphanage in 2008 to give the children in Florence House a place where they could receive care and food.

The building’s children’s home, the Malaika Orphanage, was started by resident Juma Sebichwu, a Ugandan immigrant, in 2008.

“A child tells you, I didn’t go to school because I don’t have school shoes. Or there is no bread, I can’t go to school with an empty stomach. If you buy a piece of bread for this child, you are not solving the problem. Today this child is going to be full, but what about tomorrow?” says Sebichwu.

“So I decided to stand up and start to work with the community members. We have to work together.”

Now, Sebichwu works with four mothers who permanently volunteer at the centre, cooking food and looking after the children.

Mdunge, 25, a resident since 2002, grew up at Malaika and has been coming to the crèche since it first opened. Now she comes as a volunteer. “We do after school programmes. We cook, play with kids. The same way they did to us, we want to give back to the community.”

The orphanage looks after over 75 to 100 children and young people aged one to 18 who live in the building. Most have parents but need additional support, but some are cared for by full time volunteers.

Sebichwu’s whole life has been Malaika. “This is where I live, this is what I do. I have food.”

For over a decade Sebichwu has found a way to keep the centre going, even through the Covid-19 pandemic. When asked what keeps him going, Sebichwu said, “I think it’s the appreciation from the child’s face … When they are in a too difficult situation, we work together, get them through that difficult situation. When it’s over, that appreciation, that smile … that is what keeps me going.”

To ensure the courtyard remains clean, The People SA have installed 40 dustbins throughout the building and one of the residents is paid to clear the waste daily. Currently, the residents are voting (using a ballot system) for community council leaders to oversee the maintenance of the building. 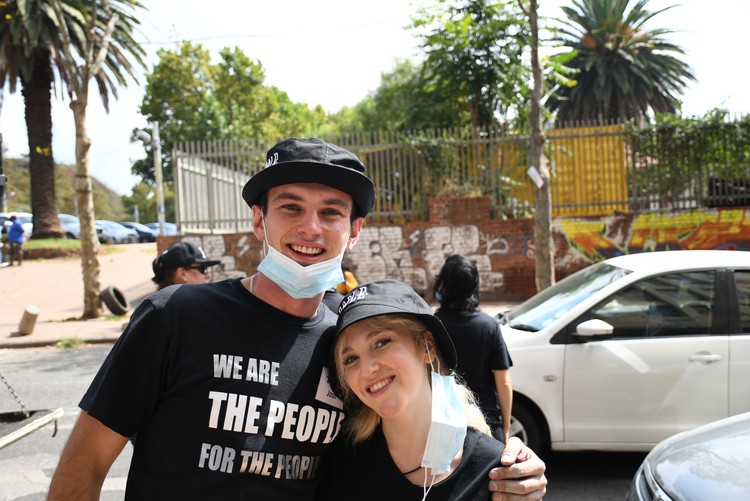 Josh De Villiers (left) and Skye Burgess (right) are the co-founders and directors of The People SA. These Wits students started the organisation in January after finding Florence House.

Once the courtyard is clean, The People SA hopes to raise money to fix the plumbing and install toilets. For the moment, some of the residents are using the toilet in a nearby petrol station (where they pay R2). Others are emptying their buckets into the bins.

The People SA also hopes to set up sewing and woodwork facilities to create sustainable employment for the residents. ”We want to create an economic ecosystem, where we create employment,” says Skye Burgess, co-founder of The People SA. “We want to provide a bridge out of the poverty trap.”

Like many of the Florence House residents, Chapel is committed to clearing out the space and creating a safe and healthy environment for the families to live in once more. “Please print my picture,” he says. “I’m going to hang it in my home. I want my kids to know I was part of this.” 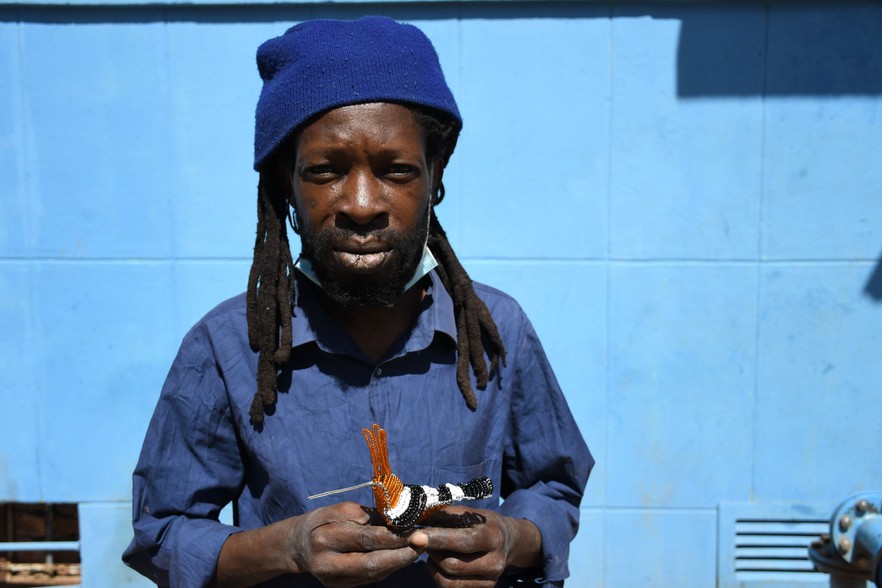 Despite the problems, Reuben Chapel says he loves Florence House.