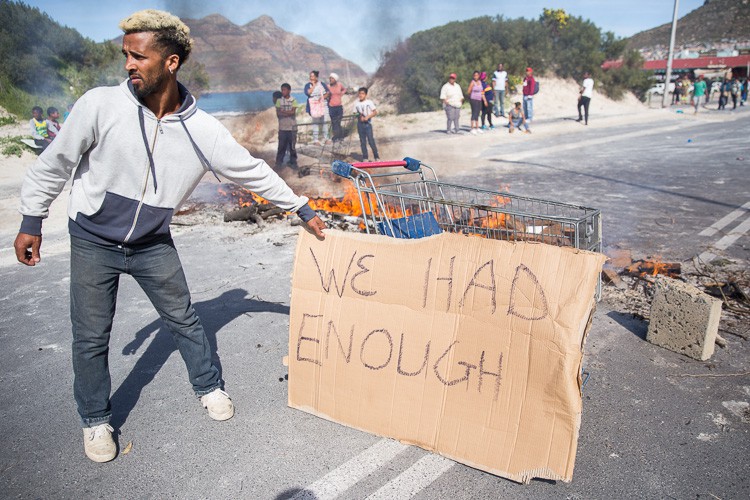 Residents of Hangberg in Hout Bay protested blocked Harbour Road on Friday with burning rubble. Police at one point fired two stun grenades to disperse a small offshoot of protesters who were blocking one side of the road. Residents screamed angrily in response.

Claudine Adams, who lives in Hangberg, said the protests started after people learnt at a community meeting on Thursday night that the City of Cape Town would be spending about R100 million upgrading the nearby Imizamo Yethu informal settlement. “We the women of Hangberg decided at that point that we would strike today,” Adams said.

Anna Strauss has been living in Hangberg for 42 years. She says she lives in a low quality house that she shares with eight other people. “We have no electricity and have to use an outside toilet. During the cold, the houses are so cold that it seems like there’s water dripping from the walls,” she said.

Protesters said that they want title deeds, proper housing with electricity and the removal of community leaders who they believe do not communicate the City’s plans properly with them. Kevin Davids, Hangberg Informal Development Area Chairman, said: “There’s a lot of promises made by the City that were not met.” He said rental flats by the City are not affordable for pensioners and disabled people.

The protesters wanted to see Mayor Patricia de Lille, but were instead addressed by Hout Bay Councillor Roberto Quintas and PR Councillor Bheki Hadebe. A handful of protesters got into a car and said they were going to the mayor’s office. The protest then dispersed in the early afternoon.

Quintas told GroundUp: “I am aware of the community’s grievances.” He said that when he met them last week, he told them that they needed to prepare a presentation on the issues they want addressed. He said that another meeting with residents would be held in mid-September.